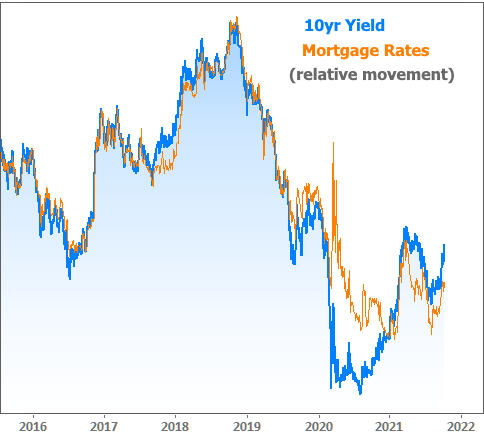 Paradoxically, mortgage rates spiked last week even though we ended the week with a massive miss on the jobs report. Estimates called for 500k new jobs created, but the September jobs total in Friday’s report was 194k.

Typically this kind of bad news actually helps rates. Why? Because rates are tied to bonds and unlike stocks, bonds aren’t just about the price going up and down. Bonds also have a rate of return they pay investors each year (called a yield in fancy talk), and this rate moves inversely to a bond’s price.

So when bad economic news hits like a weak jobs report, normally investors sell stocks and buy the safety of bonds that pay some rate of return each year. When bond prices rise on this kind of buying, rates drop.

Normally we’d expect this based on Friday’s weak jobs report. But the opposite happened: a selloff caused bond prices to drop and rates to rise.

Spoiler alert: it’s because markets believe that, as soon as next month, the Fed will stop aggressively helping prop up bond markets (to keep rates low) like they have been doing since January 2009.

Click the link below to see Matt Graham at Mortgage News Daily explain the details with the help of some great charts.

A weak jobs report is usually great news for mortgage rates, but nothing could be farther from the truth this week!

At almost any other time in history, a huge jobs report miss like we got Friday would have sent rates screaming lower. This time around, however, rates responded by surging to the highest levels in months. What’s up with that?!

Mortgage rates spiked to start October. Here’s why it happened and where rates will go next.