Today I celebrate the 10th anniversary of buying the domain for The Basis Point. Back then, the mortgage industry had gone down the tubes a few months before. In August 2007 to be specific, when one event triggered the global financial crisis (10th anniversary post of that event here).

For years until that point, I had been writing a weekly email newsletter for clients and partners. It was usually about two paragraphs, one on the major rate market topics of the week and one on deal structure or loan guideline tips. I sent it Fridays and it was designed to give real estate agents plain English talking points for the weekend, but then clients started asking for it too.

When the crisis hit in August 2007, I expanded the weekly email into a full piece for a few weeks to explain what was going on in markets. Here’s that piece from August 8, 2007 (look at the mortgage rates at that time, OMFG!). It spread at the time, and I did a few more like that in the ensuing weeks of market chaos, which also spread.

I realized people really needed concise explanations of extremely complex market matters, especially then. Until that time, CNBC very popular but was just a complicit market cheerleader, and when markets went South, the blogs were the best places for rundowns of what was going on.

So I came up with The Basis Point brand and bought the URL on this day 10 years ago, then hired my developer Alex off Craig’s list two weeks later, and got to work building the site and designing the brand.

Here is the first-ever logo draft I did with my friend Dennis Pettigrew. It started with the concept that a basis point is .01 percent so we made the oi in point into .01.

It wasn’t artistic enough for me so we went with a concept of the mathematical symbol for a basis point, which is o/ooo. But of course I had to make it overly artistic, with such a huge bleed that you couldn’t even tell what it was. 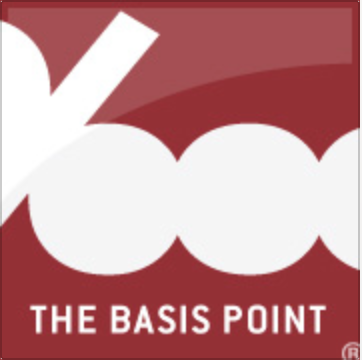 The current logo still bleeds off the sides but at least you can tell what it is. But the current logo will be replaced imminently. I always have and always will tinker with the brand. Probably more than I should. Would be better to just spend that time writing. But I genuinely enjoy working on and evolving brands, and The Basis Point is my own little think tank.

In addition to a new logo, I’m making a few other changes to the site before the end of this year that I’m excited to share with you, and one of these changes will make it easier for me to share other people’s work, which is a huge part of this blog.

As for content, I used to do daily market commentary as my signature, but there’s a lot of great writers who do that more religiously than I ever could so I’m happy to curate and share their work which enables me to focus on bigger trends.

I’ve learned a lot about what people like in the past two years from writing for Zillow and migrating my voice away from market commentary to trend commentary. And I’ve gotten so much deeper into consumer finance and lending in the past two years than I ever have, so The Basis Point should become increasingly relevant for those who like the topics I cover.

I want to offer my sincerest gratitude to everyone who reads, comments, and engages. The main goal of The Basis Point is to develop relationships, and my life and career is drastically better because of the relationships I’ve developed through this blog.

And for anyone who loves to write and blog, my simple advice is: keep writing. So what if you haven’t written in ages? Write today. So what if several days or weeks go by after today? Just start again … all it takes is one post. This blog has been on and off a few times in the past 10 years for various reasons, but it’s remained the hub and compass of my professional life because eventually I always come back to it and keep writing.