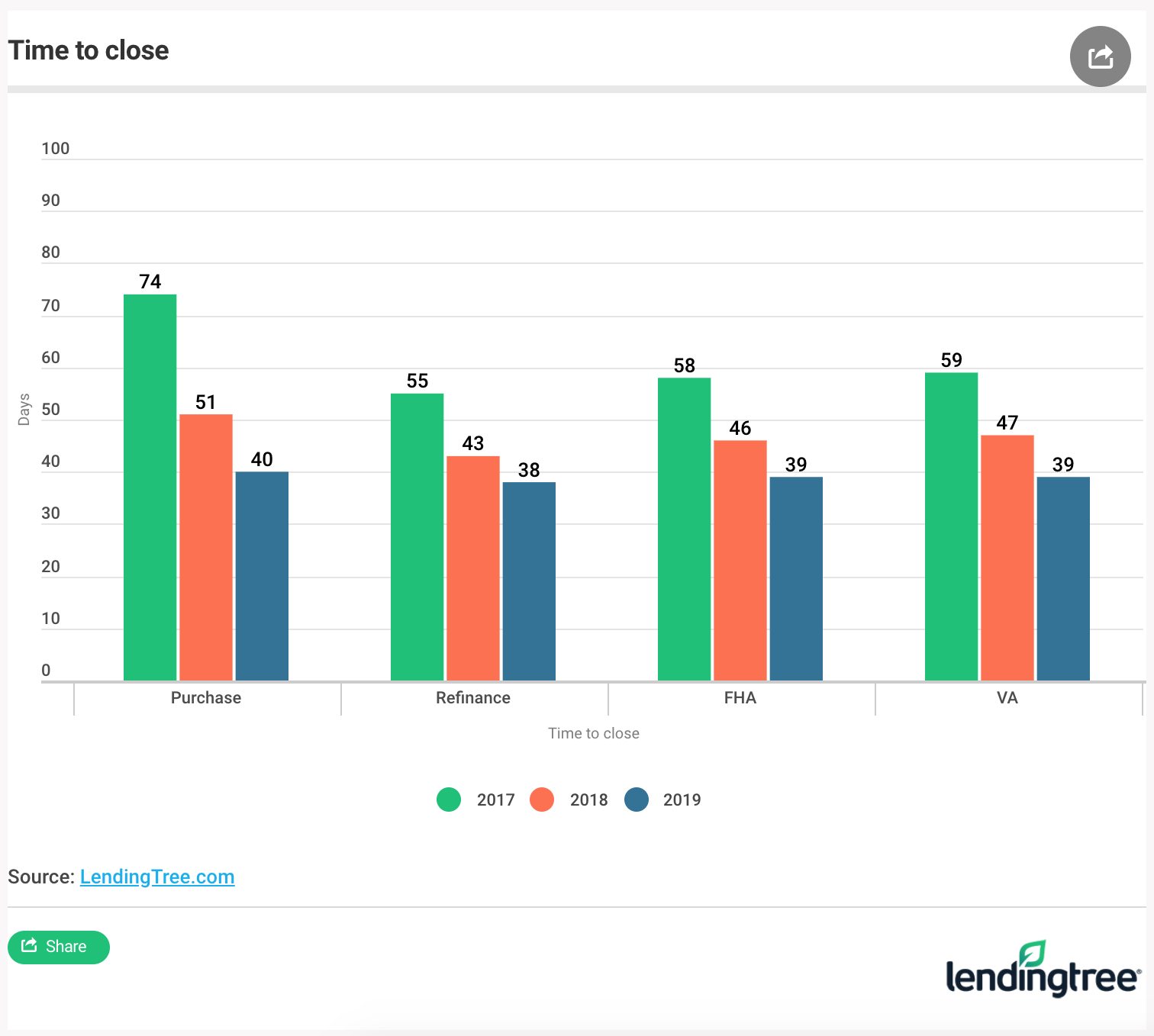 Today I want to revisit a common theme parroted out there with statements like:

– Mortgages Closing Faster Than Ever!

We hear all the time mortgages are closing faster than ever thanks to slick new lending tech.

But closing times are dictated by rate movement. And the digital mortgage revolution is ongoing, and not quite won. Let’s take a look.

MORTGAGES WERE CLOSING FASTER, BUT NOT NOW

The push button, get mortgage message has since permeated everything from The Avengers to golf tournaments, and that’s just Quicken Loans. The rest of the industry has followed suit.

So you might think every lender is getting faster as they deploy Rocket-like software.

So that means the digital mortgage revolution is here now, right? We can expect a one-tap mortgage the next time we pull out our phone?

Not quite. LendingTree said digital lending is primarily why mortgages are closing faster.

But that’s not the whole story.

Mortgages close faster and slower depending on where we are in the rate cycle.

In November, 30-year fixed rates were almost 5%. So the data read from LendingTree would reflect a time where lenders can close loans faster.

Why? Because if rates are higher, fewer people refinance, so purchase mortgages close faster.

LendingTree admits this, but attributes purchase volume as a secondary cause:

“Some of the decline [in closing time] can be attributed to lower mortgage volumes, as refinancings have been on a downward trend. But increased digitization is also playing a major role.”

In fact, we will see loan closing times rise in the coming months as new data come out that reflect the 2019 refi boom raging right now.

LENDERS WITH SOFTWARE VS. LENDERS THAT USE IT

A shop like Quicken Loans forces its centralized loan officer teams to use their company provided software when working with customers.

But as mighty as Quicken Loans is as the nation’s top retail mortgage lender, they only have 5.9% market share* of the $1.79 trillion in mortgage loans that will be done this year.

The remaining 94.1% market share is broken up among thousands of mortgage lenders which have made great software upgrades.

But they have distributed (aka branch-level) retail loan officers who are slow to adopt new technology when they already know how to serve customers the traditional way.

It will happen eventually, and I’ll go deeper when the next closing stats come out, but for today, I wanted to delineate between closing times, rate cycle, and digital mortgage adoption.

Also, for you industry readers who want to solve for adoption, don’t miss my HousingWire webinar next week with Lennar’s mortgage division and Blend. We’ll go deep on the tough question:

“Does your company have a true digital strategy, or are you just upgrading software?”

Register for the webinar here.
___
Reference:

– * QuickenLoans 5.9% market share based on first half of 2019 from Inside Mortgage Finance, and $1.79 trillion total U.S. mortgage volume based on latest Mortgage Bankers Association projection from July 17, 2019.