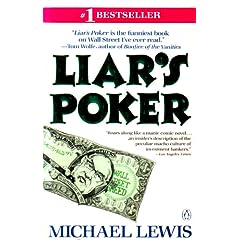 Anyone who’s been in finance for a minute or two has read Liar’s Poker, Michael Lewis’ chronicle of being a bond salesman at Solomon Brothers during its rise to fame as a mortgage backed securities powerhouse in the 1980s. If you haven’t read it, you should buy it today and read it

. It’s both essential information on how the credit securities industry came to be and essential entertainment on Wall Street the whole Wall Street game.

Now Michael Lewis offers “The End,” a fitting conclusion to the book that chronicled the advent of the mortgage backed security and the publicly traded mortgage bank. A conclusion that comes 20 years later when it’s all finally blown up. As Lewis’ boss from the mid-1980s (the former CEO of Solomon, the first publicly traded investment bank) told him this year: “Your fucking book made your career and destroyed mine.” Liar’s Poker has always been relevant for people who wanted to know about Wall Street culture, but The End just makes the book all the more relevant.

And for those interested in some additional history on the personalities from Salomon’s Liar’s Poker era, check out the Legend of Eddie Rincon.