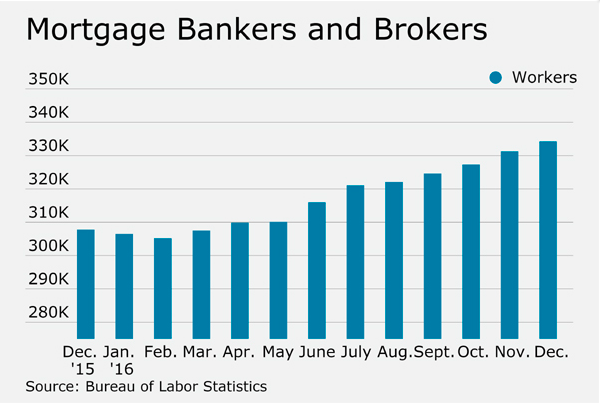 Above is a nondepository lender employment chart from National Mortgage News. It’s hard to imagine this upward trend going forward.

Brian Collins over at National Mortgage News notes that:

December 2007 was four months after the financial crisis began cutting the industry down after years of unprecedented expansion fueled by almost nonexistent credit standards. And the peak of mortgage employment came just months before the mid-2006 peak in home prices.

Then after home prices declined for about a year, the financial crisis hit the mortgage industry hard in August 2007 when credit markets froze and thousands lost jobs as hundreds of non-depositories got leveled with a one-two punch:

1. They couldn’t fund loans because the warehouse lines they used to fund loans were frozen by the large institutions who provided them.

2. They couldn’t sell loans because the large institutions that typically bought the loans wouldn’t/couldn’t buy them as credit markets froze.

We all know how these problems escalated from middle market lenders into the broader national and global financial system in 2008, culminating in Treasury’s takeover of Fannie and Freddie in September 2008 and every major investment bank either folding (Lehman), getting taken over (Merrill), or being converted to a commercial bank (Morgan and Goldman) that same month.

So this is an important peak for non-depository employment.

For the rest of 2017, companies will combine as they look for strength in a tougher market, thousands of employees will move around looking for companies to offer them better ways of generating business as rates rise, and these employment numbers will probably decrease as the market thins the herd.