I was interviewed recently by Ben McLannahan at the FT for his piece on the state of subprime mortgages in 2017, and I said semantics matter in subprime because euphemisms like Alt-A in the previous era ultimately led to a subprime financial system.

He asked me who semantics mattered for, and I said investors and consumers. I’m firm on this stance from an investor perspective because euphemisms drove the whole machine. Ratings agencies were giving A-paper ratings to subprime securities because of how Wall Street packaged and sold the securities to the ratings agencies. The entire model was based on giving a nice name to securities that were actually subprime s**t.

But Ben pressed me on why it matters to consumers, and I had to pause. Does it really matter to a borrower with a subprime profile (low down, low credit, low savings, or all of the above) what their loan product is called as long as they can get the loan?

I suppose not. Still, I think we should call it what it is so investors don’t fool themselves and all of us into thinking it’s A-paper again.

“Subprime” deservedly became a bad word post-crisis because of the reasons above (and in the piece I wrote that’s linked below), but I was thankful Ben nailed my stance on this: making credit available to borrowers who are subprime and it is an important part of economic growth—it’s untrue to call it a scourge.

Here are my quotes and below that are the links. 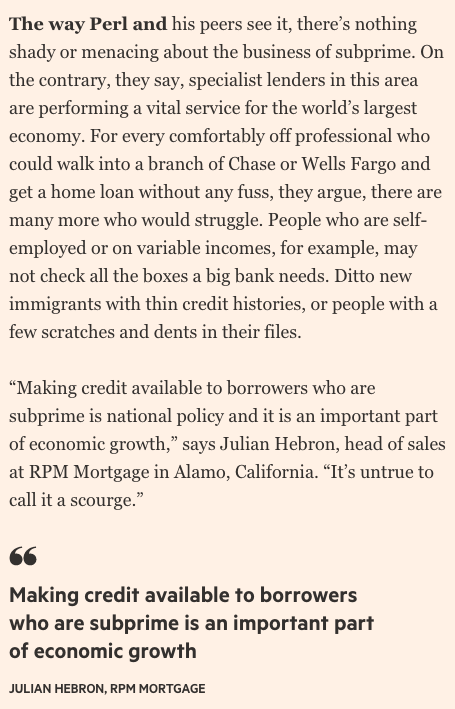