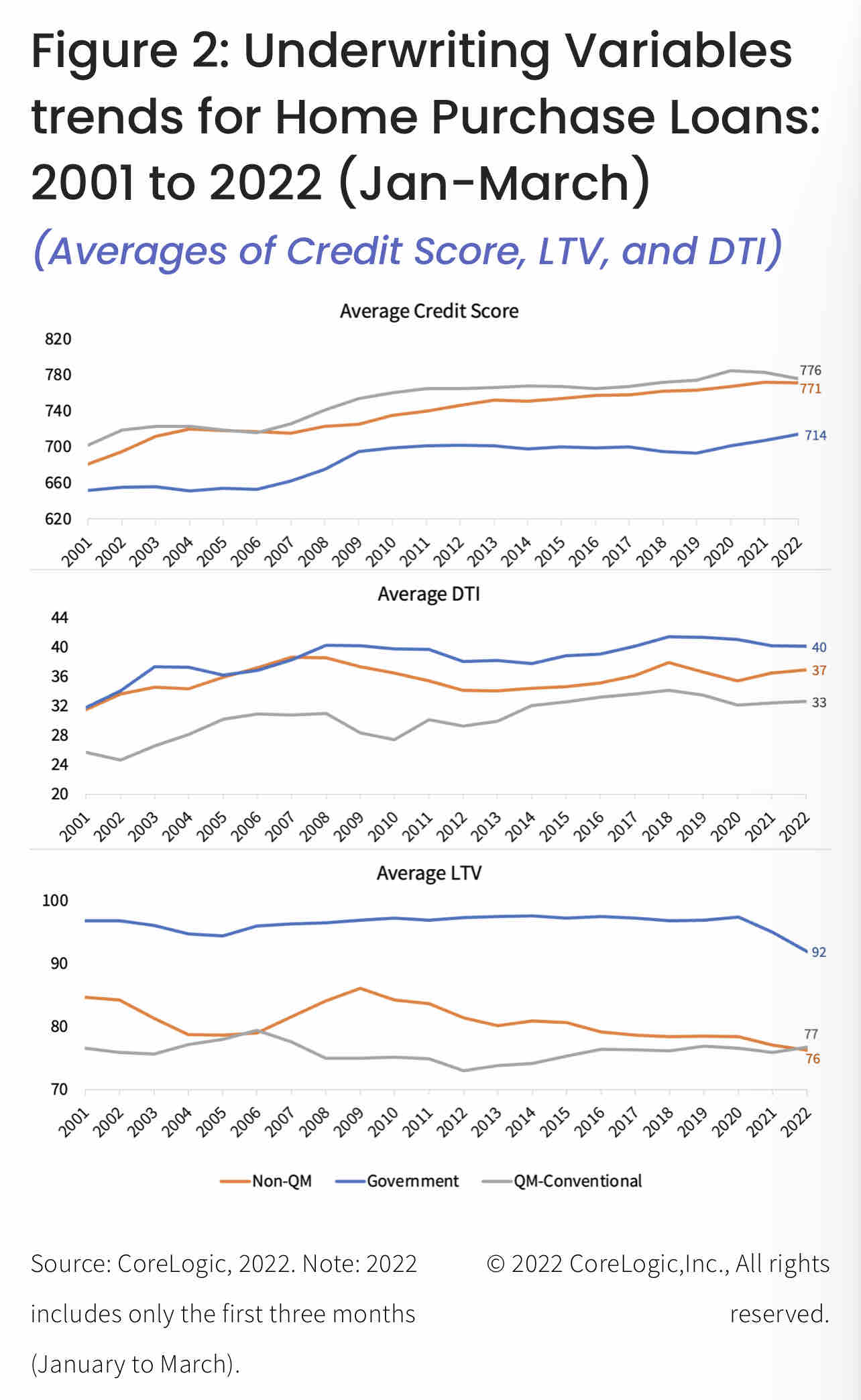 Before 2008, non-government-backed loans came to be universally known as subprime despite fancy marketing names they were given then. The fancy name they’re given now is Non-QM, which is what the government called a “non-qualified” mortgage that Fannie Mae, Freddie Mac, or the Federal Housing Administration won’t back. And these are far from subprime mortgages in 2022.

These loans are made to folks who might not have traditional recurring paycheck income but still qualify if lenders properly assess cash flow and money in the bank.

It’s very common for entrepreneurs to have consistent but irregular cadence income, and today’s Non-QM loans are for people like this.

– Loan-to-value ratio (LTV), which is the size of the mortgage divided by the property value

For 1Q22, Non-QM loan quality stats line up very well with those of traditional government-backed loans.

Here’s CoreLogic economist Archana Pradhan with details, which go along with the image in this post:

– However, average DTI for homebuyers with non-QMs was higher compared with the DTI for borrowers with QMs.

NOT EVEN CLOSE TO ‘SUBPRIME MORTGAGE 2022’

She’s right that Non-QM DTIs where higher (at 37%) than government-backed DTIs (at 33%), but a 37% DTI is still systemically safe.

The published allowable DTI for a government-backed mortgage is 43%, meaning they’ll allow you to spend 43% of your income on housing and non-housing debt each month.

In actuality, government-backed mortgages (aka qualified mortgages or QM loans) allow DTIs all the way up to 50% if your loan is approved by automated loan approval engines controlled by Fannie Mae or Freddie Mac.

Not that you may want to go that high, but high credit score borrowers can and do get approved for DTIs that high everyday on government-backed loans.

So when we talk about Non-QM allowing folks to spend up to 37% of their income on housing and non-housing debt, it’s definitely within the safety zone for American housing and the economy.

If you have questions about DTIs or QM (aka government-backed) vs. Non-QM loans, please comment or reach out.

Below is a link to full CoreLogic post, plus key notes on whether “subprime mortgages” are toxic like so many assume.

– Why It’s OK To Refer To Subprime As Subprime