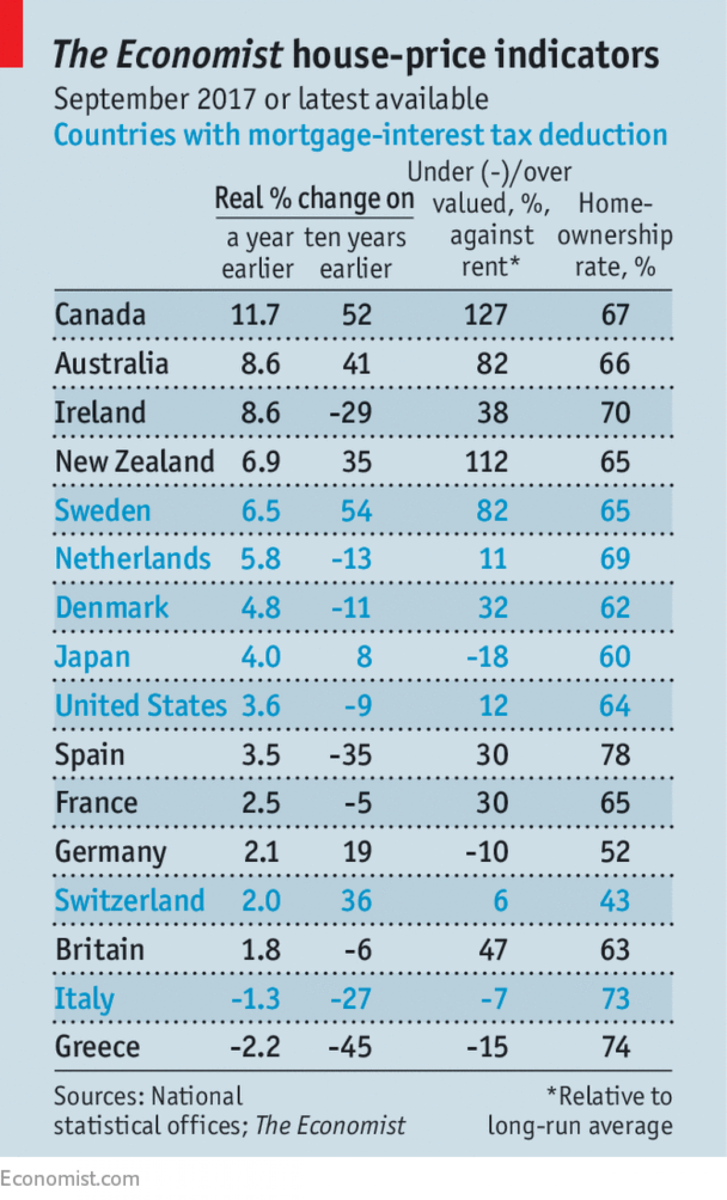 Above is the Economist’s quarterly house price dataset showing under/overvalued global housing markets and home ownership rates. And below are excerpts from the accompanying article.

– [Before GOP tax proposals] America still subsidises mortgages to the tune of $64bn a year, by allowing homeowners to deduct interest costs from their tax liabilities.

– Twelve European Union countries also include some form of mortgage-interest deduction (MID) in their tax code. The average European subsidy, however, is around a tenth of America’s—about 0.05% of GDP. The Netherlands is much the most generous, at 2% of GDP.

– All but three EU countries have either reformed or repealed their MID schemes since the 2007-08 financial crisis. Ireland, Spain and Greece, for example, withdrew subsidies after suffering property busts. But withdrawing MID cannot on its own prevent property-market bubbles.

– According to The Economist’s round-up of global house prices, Australia, New Zealand and Canada all have overvalued housing markets despite the absence of mortgage subsidies (see table).

– The Republican plan hopes to save the Treasury $100bn over ten years by limiting the subsidy to the first $500,000 of any outstanding mortgage and to first homes. Yet the change would affect just 3% of outstanding mortgages, according to CoreLogic, a data firm. Changes to how ordinary people file tax returns may reduce the number who claim MID and further focus its benefits on top-rate taxpayers.

– With interest rates near historic lows, this might seem an opportune time to end MID altogether. If that were to happen, some estimates suggest house prices might fall by 10-15%. But they would stabilise as the pace of house-building slowed. When the Netherlands adjusted its mortgage subsidy in 2012, house prices fell by 10%, but they are now climbing again at a decent clip. Prices in Britain are partly buoyed by the private rented sector where landlords have been able to deduct interest expenses from their rental income. The government began phasing out that deduction in April. That will have a big effect on the market.

– Reagan reckoned that home ownership brought “stability and rootedness”. That may be so, but it also brings rigid labour markets. Yet few politicians are willing to praise the merits of renting. Thatcher’s and Reagan’s housing reforms were thought to be driven by a fear of a slow creep of socialism. They would look enviously at Russia today. Home ownership rates in Britain and America have fallen in recent years; Russia’s has increased by 30 percentage points in two decades.