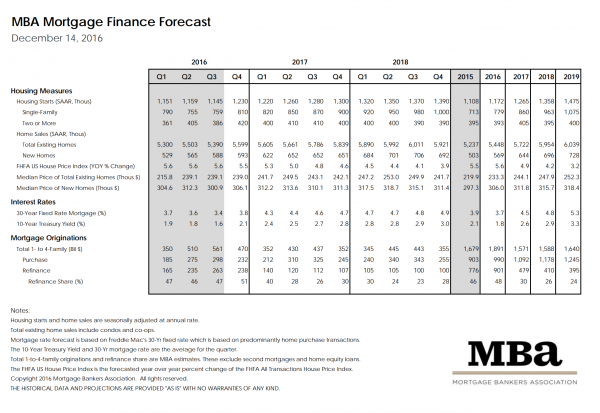 At a conference this month, I asked a panel of mortgage executives how they’d handle spending decisions after rates spiked .5% since the election (rates are up another .25% since then).

Business as usual, they replied. Sticking with the long-term plan. No adjustments.

I pressed, citing the latest projections from the Mortgage Bankers Association (above) showing that while purchases will be up 10%, refinances will be down 47%, bringing total originations down 17%.

Still no adjustments to spending. One noted that we’re still looking at a $1.5 trillion market so it’s all good. That answer in particular was met with nods of approval by the audience of fellow execs.

I didn’t press any more that day, but it stuck with me since then because that answer assumes one is growing market share while the rest are losing, which I don’t buy. If the market is down 17%, all firms and individual loan officers are impacted.

So if you’re not a PR expert panelist, how do you plan for the 2017 market?

Look at your 2016 business in three categories: rate/term refinances, cash-out refinances, and purchases.

Rate refinances were already cut in half within one month of the election. Here’s what Black Knight said on 12/5:

From the 8.3 million borrowers who could both likely qualify for and had interest rate incentive to refinance immediately prior to the election, we’re now looking at a population of just 4 million total, matching a 24-month low set back in July 2015. While there are still two million borrowers who could save $200 or more per month by refinancing and a cumulative $1 billion per month in potential savings, this is less than half of the $2.1 billion per month that was available just four short weeks ago.

So while you might have some rate refi opportunity, best to cut your rate refi projections by at least 50%. If 70% of your 2016 business was rate refis, it’s now clear that you will indeed be impacted.

On the refi side, that leaves cash-out refis. This is a much smaller share of the pie for most loan officers and companies. Look at your percentage of cash-out refis from 2016, and you should also be honest with yourself about reducing that–you know that a lot of those in 2016 began with clients intending to lower their rate then the cash-out came later in the discussion. A lot of those go away because not everyone needs the cash, they just took the cash while also lowering their rate. This won’t be an option in 2017.

And finally the lifeblood: purchase loans.

It’s critical to be honest with yourself here too. There are a lot of refi shops out there that specialize in low rates. Their volume will be destroyed in 2017, but if they can survive, this will create a lot of underwriting capacity, so they can shift their low rate focus to purchase loans. And even though they’ll deliver a substandard experience for borrowers because they don’t understand the complexities of purchase business, they’ll still lure a certain amount of purchase loan market share away from you because consumers will always react to lower rate offers.

And this is to say nothing of the banks and credit unions that will redouble their efforts to market home purchase loans to their existing depositors.

So by the time you’re done with an honest assessment of your 2017 prospects for rate/term refis, cash-out refis, and purchases, you’ll see that there’s no chance you’re not adjusting somehow in 2017.

For companies, it means that talent wars will heat up and so will M&A as they seek to shore up volume.

That last part brings me back to the panel. It was on spending for mortgage process automation technology, and in fairness, the panelists were saying they wouldn’t adjust spending on this technology.

As a loan officer, you do need a company that is investing in this technology that makes the process easier for you and for your clients. But let the companies worry about that. For now you need to focus on your 2017 estimates–and how you’re going to win purchase business.