We’re living through history right now. We’re currently in month 121 of the longest growth cycle the U.S. economy has ever seen. The economy boom has seen home prices and wages grow, although not necessarily as fast as we might want them to.

But unless you’re a total nerd like me, it’s hard to appreciate what the longest expansion in history really means.

CoreLogic is a huge real estate and finance data firm that’s tracking the expansion closely, and they just released a huge report on the last decade of housing and economic growth.

Here are the key stats that will put the last 10 years into perspective.

In fact, homeowners now own more of their homes than ever before. Home equity is at $15.8 trillion now, and homeowners only had a collective $6.1 trillion in Q1 2009.

Home values are through the roof

Hopefully many veteran homeowners who cursed their home during the recession are happy with their investment now.

Low interest rates have offset rising home values, so both home buyers and sellers can rejoice.

Interest rates are so low that homebuyers could potentially have the most buying power they’ve had in 20 years if they go any lower.

The 2010s were a decade of renters, but home ownership is finally coming back around 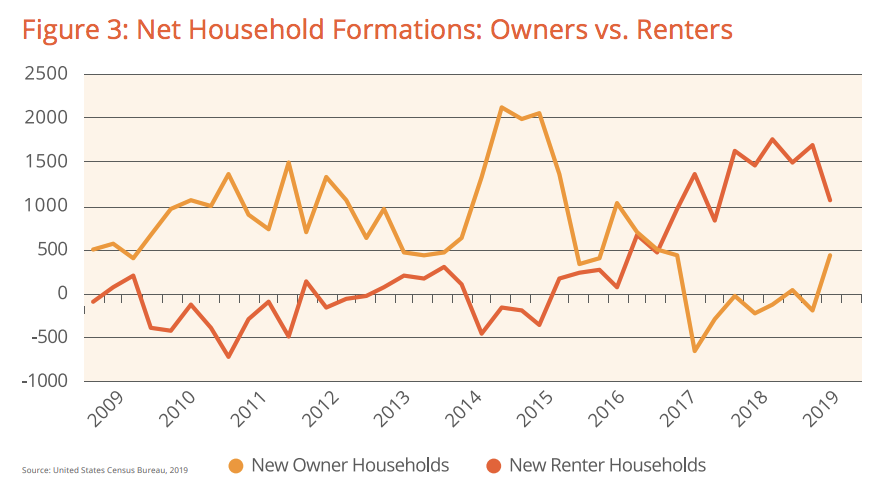 In the depths of the recession between 2009 and 2012, the U.S. added 12.9 million renter households and lost 2.7 million homeowner households. Hard times kept a lot of people out of the housing market, and that effect has lingered for a while.

However, the economy boom is turning the trend back to home ownership. In the first quarter of 2019, 1.1 million new homeowners entered the market. The number of renters increased by only 458,000, following a decrease of 167,000 in the last quarter of 2018.

Home flipping is bigger than ever

In Q1 2006, at the peak of the housing market right before the crash, 11.3% of homes on the market were being flipped. That means investors bought them up below market value, fixed them up, and sold them for a profit.

That’s not necessarily cause for concern though. The profit each flip sale has made on average has stayed pretty stable at a little over $10,000 per sale. That means investors aren’t using home flips to speculate and inflate costs so much as generate consistent profits.

– The Role of Housing in the Longest Economic Expansion (CoreLogic)