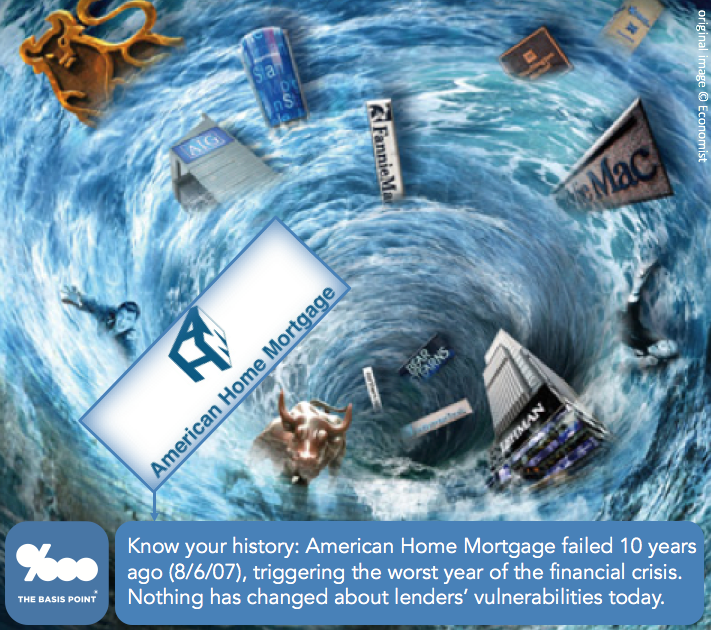 A critical financial crisis 10 year anniversary flew under radar today, and I can’t let that happen because its lessons are too important for any of us to forget—whether you were in the thick of it 10 years ago, or too young then but in the thick of it now.

It’s the story of how a publicly traded firm called American Home Mortgage, the number ten lender in the country, shockingly ceased funding loans on July 31, 2007 and filed bankruptcy on August 6, 2007. The worst of the financial crisis unfolded a year later, but it was a mortgage-led crisis and this event is what toppled the mortgage industry.

So as we come full circle with mortgage employment at a 10 year high and a new generation of lenders prepping IPOs, let’s review this story about how all lenders are made or broken—because despite the slick fintech messaging most firms have now, almost nothing has changed about their vulnerabilities.

Just one month earlier in July 2007, my wife—who I’d bought three properties with, never fought with, and taught me the definition of equanimity—blew up.

After all we’d been through, I’d never seen her look or speak that way, so she didn’t have to say it twice.

But the wanton yuppie in me was heartbroken. We’d been circling for a couple months on a home with drop dead views of the best parts of San Francisco. And as a lender, I had it all figured out:

-We own relatively new cars outright so no bills there.

-Keep modest condo (we bought at the bottom of the dot-com bust) as a rental.

-Keep rental unit we just bought in February because it’s in an area of SF that’s set to boom in a few years.

-Sure it’s a “little” stretch, but we’re about to start a family so we need more room and she has a great non-finance job, so we’re hedged even if my industry has a “correction” coming. And also we need do it quickly because some sizable lenders have already failed this year, plus there was that Bear Stearns hedge fund bailout last month. But that’s all subprime, everything is fine, and I’m doing this with a clear head.

That last sentence I was telling myself is especially important. This was the basic mindset for me and millions of other consumers and financial pros. It’s all subprime. The ratings agencies have this under control.

A month later I’m still crushed from passing on the view home, contemplating how we’ll add a baby room in our condo next year, and it all hits me when I start my weekly letter to realtors and clients:

By now, you all know that the lending market turned on a dime last week, causing rates and approval guidelines on Jumbo loans (above $417k) to tighten drastically.

Thus began a letter (and an era) that changed my life. It told how the number ten U.S. lender American Home Mortgage had suddenly stopped funding loans and triggered a global credit crisis.

All that happened a year later, but the American Home Mortgage failure set everything off.

To put it in perspective, American Home had funded $59 billion in loans the year before (2006), and if we compare that funded loan volume to this list of the top 10 lenders of 2016, it would be like if Bank of America Home Loans ($64 billion) or U.S. Bank Home Mortgage ($56 billion) disappeared into thin air today.

To understand why a firm this big suddenly stopped funding loans one day (on July 31, 2007), you need to understand the role of warehouse banks.

They are large global institutions that extend lines of credit to mortgage banks to fund their loans.

After mortgage banks use warehouse lines of credit to fund and close consumer loans, they sell them to end investors for servicing and/or securitization, then they pay back the warehouse lines and start again.

American Home was thought to be an A-paper lender, but when it turned out they were more of an Alt-A lender (one of the many euphemisms that would emerge for subprime), investors who normally bought those loans stopped buying. This caused the warehouse banks to cut off American Home.

This had been going on with other lenders throughout 2007, but the American Home case was an inflection point for two reasons:

This relationship between consumer lenders, warehouse banks, and loan investors is essentially the same today.

As for loan quality, that machinery is also much the same today. If a firm wants to securitize a pool of consumer loans, they pay a ratings agency for a quality rating on the securities.

When it comes to mortgages, what’s different today is many of the worst loans—NINJA, negative amortization—were made illegal.

But loan guidelines continue to loosen and you can get 90% financing to buy a $1.5 million view home again.

Which brings me full circle personally and professionally.

The economy continued to unravel, and that view home finally sold for $1.2m in April 2010. Even if I got it for $1.5m instead of the $1.7m list price, a lot more than my shortsighted yuppie ego would’ve been crushed.

We built an extra bedroom in our same condo that my son is sleeping in right now.

That rental we bought in the upcoming neighborhood? Sold it three years ago for 56% more than we paid, and used a 1031 exchange to buy a view home elsewhere that we use and also rent.

And I work for the same lender I did then.

All pretty conservative, and all triggered by this critical moment in mortgage history.

So to all you property hounds contemplating similar choices now that I was then, two things: (1) trust the most rational members of your family, and (2) never forget that another great deal will always present itself—always.

And to all my fellow lending industry warriors, this is a very long game. Remember that as IPOs heat up and loan quality standards come down.