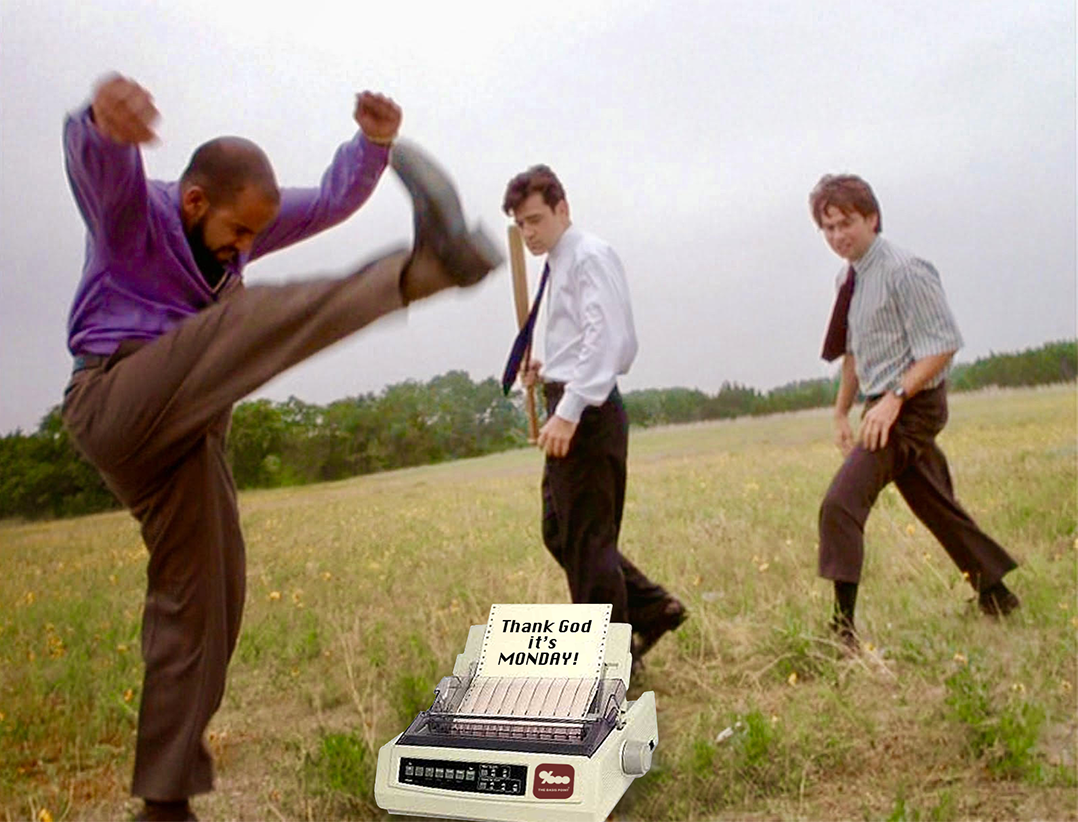 On this 20th anniversary day of Office Space, everything and nothing has changed about work. Below Spencer and I both provide our takes on the movie, the state of work today, and where we think it goes from here.

With BnB, Judge mastered stupid culture, then channeled all that mastery into the workplace. He hit everything from a-hole bosses to annoying/crazy co-workers to broken processes to shitty office equipment.

And most of all he hit the soul-sucking part of work through the lens of main character Peter who doesn’t really know what he wants.

This is important. What do we do if we know we’re unhappy, but don’t know how to get out of it?

Despite the constant social streams telling us to forge our own path and ‘grind’ our way out of it, not everyone can be an entrepreneur.

Those on the entrepreneurial path usually work way more and are less secure than if they just kept their day job.

The moral of Office Space is acceptance. Accept the best balance of money, freedom from soul-sucking machines, and satisfaction with the work you’re doing.

That’s all any of us can do.

As for the state of work 20 years later, there are two drastic differences:

(1) Real-time, all-the-time culture didn’t exist then like it does now.

Peter could go home (to his place at Morningwood Apartments) at a decent hour and feel at least a temporary sense of normalcy laughing with his neighbor about how stupid workplace phrases like “case of the Mondays” are an ass-kickable offense. Today, you go home, eat, then catch up on email, Slack, text, DMs across every social platform—and since everyone else is doing the same, it never stops.

But you must make it stop at least some of the time or your soul, health, ability to be creative, and mindset for finding your long-term path all suffer.

(2) Work is now sold to us like an entrepreneur’s dream instead of a set path.

Unlimited Time Off! actually means cheaper labor cost for employers. You still have to get those TPS reports done.

Now, you’re a startup yourself, and this job is just your latest tour of duty as you build your own dream! This means the company owes you nothing, and did you get those TPS reports done yet?

Dan Lyons, who worked with Judge on HBO’s Silicon Valley, has written two books on this current state of work. Disrupted and Lab Rats both cover the doctrines that are now sold to us, and ways companies and individuals can create a better work culture. They’re both must-reads for anyone who cares about this stuff.

Or maybe it’s best to just re-watch Office Space for the ten-thousandth time like I did back when I was starting out. Because it first taught me acceptance, which calmed me down enough to eventually figure out a path.

Wanna feel old? I was 7 years old when Office Space came out.

I didn’t see the movie until I was in college and about to join the workforce. I figured it was a relic of its time. I was about to join a newer, hipper economy with open-floor office plans and flexible working hours.

Like Julian said, Office Space still absolutely nails the way work crushes our souls, but the reality of work today is more tragedy than farce.

The name of the game now is hustle. For most people, it’s just to make ends meet.

You work one job where the higher-ups carefully manage your hours so they don’t have to give you benefits, and as soon as you clock out you turn on your Uber app on the drive home because you still need to make a few extra bucks to make rent or feed your kids.

For others, hustle fills the void in the soul that we were told a fulfilling career would.

The work machine constantly demands more, more, more, so you think that giving it more will lead to a payoff…but does it? No. Long hours and relentless self-promotion can get you places in work, but at what cost over the long run?

How close are you with your friends, your family, your children? Were you present during your friend’s birthday party, or were you shooting off just one more email on your phone?

If you’re not doing it to survive, hustle’s just a treadmill. It’s the pace you set for yourself. It only leads one place, and that’s Burnout Town.

If you aren’t careful, you’ll find yourself running from the office in tears and physically unable to turn back. I’ve been there and my career barely survived it.

Office Space still articulates the “so what?” of working hard better than any other document about modern work. Peter realizes the hustle builds endlessly towards…something, but he doesn’t want it. He wants satisfaction in his work, and that’s why construction work appeals to him in the end.

I read a modern take on the white-to-blue-collar journey this week, an Office Space for the 21st century.

A prominent university professor, who keynoted academic conferences and was a Very Important Person for years, hung it up and became a bus driver. He was sick of the egos and brand building and endless politicking of academia, which I think applies neatly to any office environment.

He’s happier now in a simpler life, and reading his piece, I thought of Lawrence in the ending scene of Office Space.

– Self Worth vs. Financial Worth – Notes From A Zen Workaholic