Today ends my writing glut. Or dearth. Whichever the bad one is. I’ve got three quick things to note as I ramp up publishing after a summer focused largely on family and mental health.

1. Don’t Learn How To Think Only At Work

Long before he became the enlightened Buddha, Siddhartha mastered business. There are countless versions of Siddhartha’s story and in the Herman Hesse version I’m particularly fond of, Siddhartha’s business mentor Kamaswami becomes frustrated with Siddhartha exhibiting too much of his own style and reminds him he’s learned everything from Kamaswami, to which Siddhartha retorts:

“I have learned from you how much interest one can claim for lending money … but I did not learn how to think from you … it would be better if you learned that from me.”

I must’ve read this book 5 times early career while learning how much interest I could claim for lending money. Revisiting it during a mid-career break this summer, this exchange between Siddhartha/Kamaswami stood out because most people including me are so focused on serving the business machines we’re part of that we forget how to think. We play our roles, and that may serve us well economically, but I’ve seen too many people become the roles and stop thinking about the right things.

I’ll always play my roles and remain hungry to learn from everyone I do business with. But original thought informed by many perspectives remains a top professional priority.

As a writer and editor, I try hard to slash and burn. This slows down writing and often stops it completely. I won’t publish because a concept isn’t tight enough, or I won’t even start writing because an idea is too sprawling. There are many quotes on this quest for succinct writing, and this one Henry David Thoreau wrote to a friend in 1857 stands out for me:

“Not that the story need be long, but it will take a long while to make it short.”

Sadly this is my default writing mindset, and ironically I wasted way too much time looking up this and another similar Mark Twain quote to write this post. I need to retrain my mindset. Yes shorter writings are almost always better, but longer writings can help us discover what we think about a topic.

And they can help us brush up on those certain things we can never get right, like dearth vs. glut. 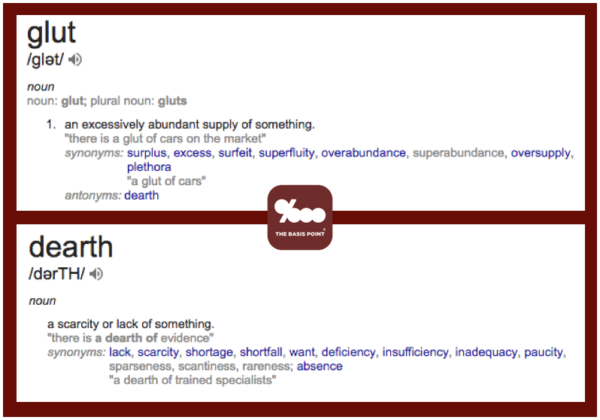 Once we know what we think about a topic from some longer and less polished posts, we can come in later with the more polished work on the same subjects.

This is a concept Gary Vaynerchuk calls “Document. Don’t create.” Because creating is too slow and you get bogged down in the perfection and polish of it all. So you just document stuff. He’s preaching in a social media context, meaning people should go for volume of documenting their lives and their voice on social, and that body of work becomes something you can draw on later to create. But it’s the same with bloggers.

I say this for myself as much as for everyone else out there because you can’t just keep it all inside. Too many are saving their best ideas for some magical day when they’re going to let it all loose.

There are no magic days. Or maybe a better way to say that is: the magic days come when the work you put out there helps you finally articulate that big idea, or when the feedback you get confirms you’re actually onto something big.

So join me in cranking out a dearth of content. Or a glut. Whichever the good one is.