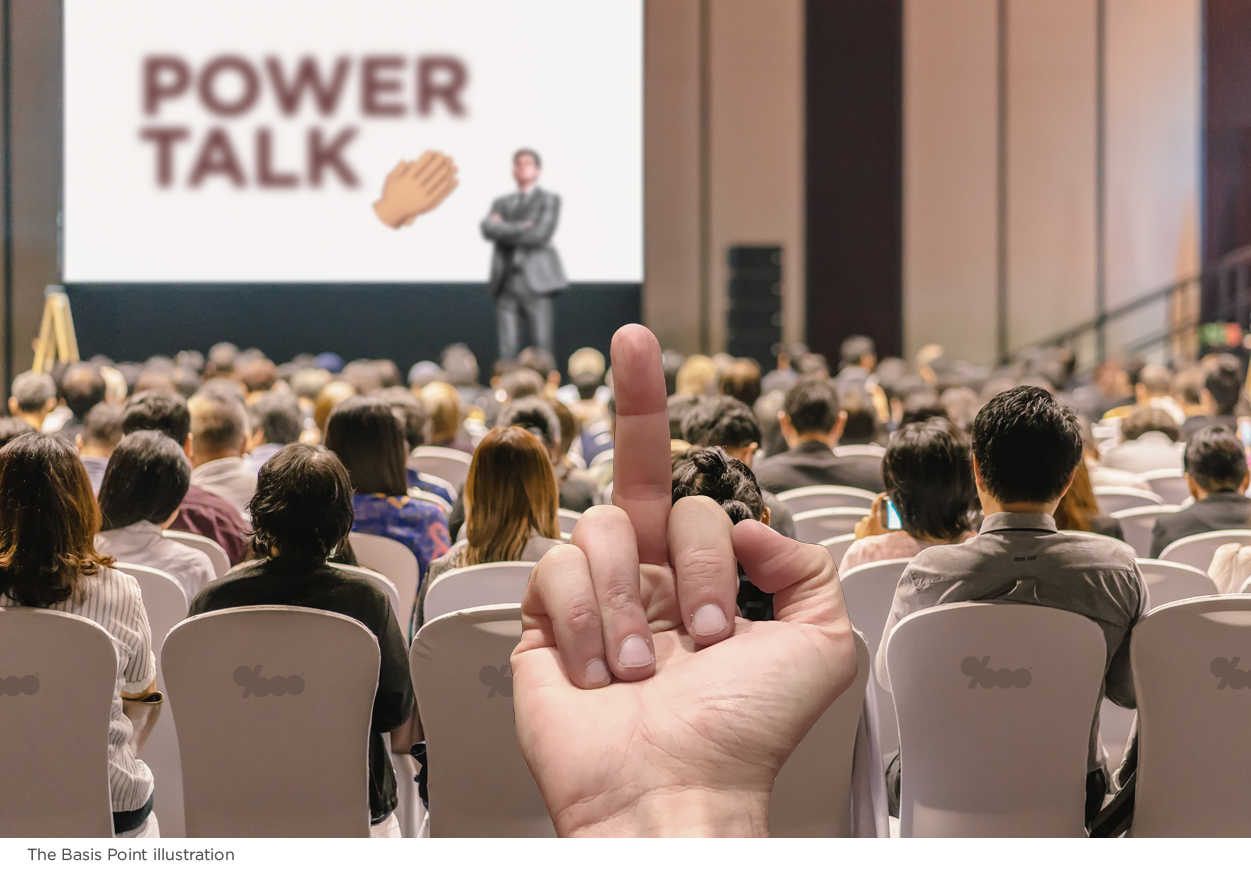 Power talkers like to begin sentences with super annoying phrases. Here are the 10 worst. May this help entertain you while waiting to talk next time you hear one. Please add any I missed.

Look, I’m not going to say I’ve never used this, but I hate myself every time I do. Except for just now. Because it feels great to rip everyone who tells you to look when they’re actually trying to get you to listen.

This is far more grating than ‘Look’ because it’s a direct order to let someone foist their views upon you. Most people say this (and Look) as more of a tick than formally calling you to attention. But be wary nevertheless. They’re usually people so used to having one-way conversations that they won’t listen to you unless you use the same tactics.

This one is so bad it’s almost funny because people open with this before they’ve actually built their case. But even if they’ve built up to something, you usually miss the main point because you’re too busy thinking about how utterly meaningless the phrase is. Net net: if you hear someone say this, it’s your queue to stop listening.

This is another one often used excessively as a nervous tick. It’s less annoying (and less meaningless) than Net Net, so you might actually like a person who says this. In these cases, just remember: you don’t have to listen to the long stories, you just have to listen to what comes after the phrase. As in: “In the end, I finally found a parking space so I’ll see you in a few!”

This is an attempt at being polite, but it’s byproduct is not being able to get to the point. I’m guilty of using this one because I don’t want people to think I’m making overt (and potentially wrong) assumptions about their position on a matter. But it’s a tricky one because it can come off as too earnest or too smug. The presumptuousness of the latter is why it’s on this list.

Prepare to hear a pack of lies every time you hear this. If an honest person is speaking to you, they’ll never say this. Sure it can slip out of everyone’s mouth, but edit it out of all speech going forward. It will make you more honest. And less annoying.

This phrase (plus the next two) is used by people who have a nasty habit of overusing tent fingers when they speak. They think it makes them look contemplative, but [insert #6], they’re trying to worm their way into everyone going along with their stupid ideas, and/or they’re about to shoot down your ideas.

8. IN MY HUMBLE OPINION

This is the preferred preamble of blowhards. It works in writing, but when most people say it, they’re getting ready to unleash an arsenal of unwavering views on the topic at hand. They only think it’s a humble opinion because they’re so committed to it, they’ve convinced themselves that everyone else would have to agree.

9. WITH ALL DUE RESPECT

If you hear this, you’re about to be disrespected. Like ‘To be honest’, this phrase should never be spoken because it automatically signals a fight. Which is unnecessary. If you disagree with something, you can say so in countless other ways that don’t annoy and provoke the person you’re talking to.

Most people would immediately tune out if they heard ‘Let me be clear’ so I chose ‘make no mistake’ for the last slot. It’s more widely used, though no less annoying, because it’s a colloquialism. But be on guard for people who are actually talking down to you, and immediately tell them to do this. Just try not to laugh.