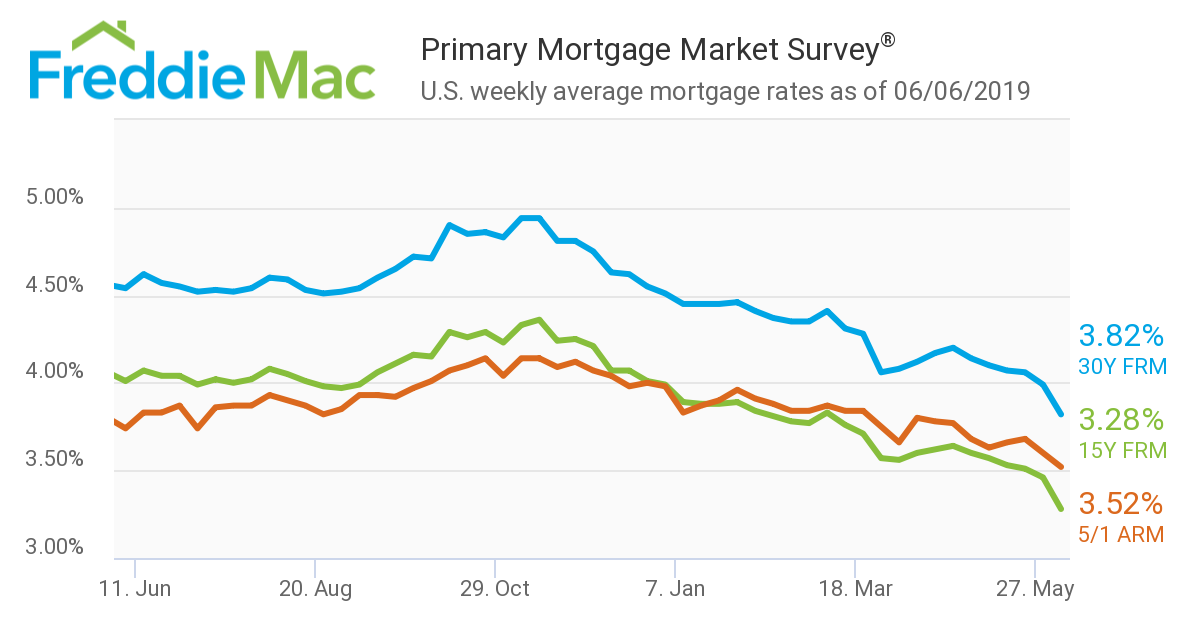 The first Friday of every month, the government estimates how many jobs were created or eliminated the previous month. May was pretty bad, but paradoxically, bad jobs growth will help keep rates in the high 3s, at least for the short term.

That’s not a typo, as the Freddie Mac rate chart above shows. 30-year fixed rates are insanely low at 3.82%.

This Freddie Mac rate data hits each Thursday and looks back one week, so these rates (which proliferate mainstream media) are expired when they hit each Thursday. But this week is an exception because today’s weak May jobs will keep rates at these 2-year-low levels.

How long will this last? It’s never long when rates are this low.

So if you’re looking to refinance, you need to get on it, as always with rate dips. And if you’re a homebuyer, lower rates will help when you’re ready, but it’ll still take how long it takes for you to find the perfect home.

Don’t feel rushed by lower rates to find a home. Lower than usual rates are a bonus if they’re exactly this low when you get into contract on a home and are ready to lock a rate. But rates move up and down daily as bond/rate traders react to market and economic data, and you can’t tie your home search to these factors you don’t control.

Rates dropped in May as bond markets rallied on trade war fears, and this May jobs report means they should hold a bit. But the economy is still looking pretty strong, so upward rate pressure will return as it always does.

Act accordingly, and listen to your loan advisor when they explain rate lock timing for refi loans vs. home purchase loans.

As for the May jobs report itself, here’s a recap:

And here’s notable jobs comments from Bank of America and Goldman Sachs:

[BofA] “Bottom line: it is hard to find good news in this report and clearly points to a slowdown in activity. [A] worrying sign came from the service-providing sector which only added 82k workers, well below the 158k job gains per month seen in the prior 6 months.”

-Goldman was expecting 195k new jobs, well above the 178k consensus and drastically above the 75k actual.

-But their view corroborates the strong economy comment above by noting a lot of employers are reporting labor shortages and reminding us that we’re past full employment in the economy and might just be running out of people to hire.

The only take on the jobs report you need. pic.twitter.com/iWnlpmzCa9