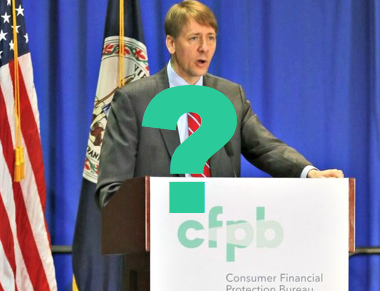 My colleague John Stevens is president of a mortgage industry advocacy group called the National Association of Mortgage Brokers (NAMB), and because of this additional role outside our company, we collaborate on public statements when he’s asked to comment on regulatory matters. Our answer to regulatory outlook questions is: the law is the law, and the rest is chatter.

I mention it because the chatter meter exploded this week when the head of America’s top consumer finance regulator resigned effective month-end. The Consumer Financial Protection Bureau (CFPB) officially started July 2011, one year after the massive Dodd Frank post-crisis financial reform bill was signed into law, and Richard Cordray was appointed head of the CFPB in January 2012. His regulatory approach is known for two main mechanisms:

1. Bulletins which provide guidance on select issues, and

2. Enforcements actions against consumer finance companies which provide further guidance on the enforcement issue at hand.

These mechanisms are believed by many in consumer finance to be too ambiguous and heavy-handed.

On the ambiguous note, Cordray once said this about a 2015 bulletin in which the CFPB took a very dim view of partnerships between lenders and real estate companies:

“These bulletins are our way of trying to make crystal clear our expectations. We intend for everyone to pay careful attention to what we are saying and act accordingly.”

In other words: the CFPB bulletins should be considered law even though the bulletins aren’t law themselves, but reference certain provisions of the law.

On the heavy-handed note, Cordray made the CFPB’s first enforcement action (on credit cards) in July 2012, and has made 60 mortgage-related enforcements* from July 2012 to present. These enforcements often come with public CFPB orders — called consent orders — that describe the enforcement, and tell the impacted company what the CFPB requires to fix company business practices.

The CFPB treats consent orders like the bulletins in that they strongly encourage all industry participants to study the details of each enforcement against their peers and “act accordingly” by taking them as seriously as if they were the company getting hit with the enforcement.

They do this because they can’t fully examine every consumer finance company on every issue. So they set the tone by doing enforcements and bulletins on issues they deem most important.

It’s been highly effective in that the CFPB certainly has the industry’s full attention, but also controversial. And now with Cordray stepping down, the chatter is that radical change is imminent. Here it’s worth noting again that the law is the law and the rest is chatter.

The chatter now says that White House budget director and harsh CFPB critic Mick Mulvaney will be appointed interim replacement until a permanent replacement is nominated by the White House and confirmed by the Senate. Replacement candidates include other CFBP critics.

As such, the CFPB could go from a single director structure that receives funding from the Fed to a commission structure that must go through congress for funding. If both changes happened, the “heavy-handed” pendulum could fully reverse. Here are two thoughts on this matter:

2. In that same vein of balance, a commission that continued to get funding through the Fed could create an effective and fair regulator. The combination of a commission (as opposed to single director) that had to go through Congress for funding would create enough red tape to render the agency ineffective. The unintended consequence for industry participants in this scenario could be even more ambiguity on the rules.

Whatever happens, this quote from Kate Berry in American Banker sticks out this week (and underlines the challenge of a single director structure): “Seldom if ever has the resignation of a top regulator signaled such a large change in direction for a federal agency.”

And the CFPB is just the beginning. All major housing finance regulatory posts in Washington are turning over, as Brena Swanson at HousingWire covers in the link below.

No wonder there’s so much chatter. But no laws have changed yet.
___
Reference:
–Radical changes ahead for CFPB after Cordray departure (American Banker)