So it’s no surprise the $185 million remodeling of Cleveland Cavaliers arena—known as Quicken Loans Arena until now—will launch with Rocket branding.

Meanwhile they invest about half a billion per year to fuel the Rocket brand, and now we’ve got this week’s Rocket branding move with the Cavs arena, which Gilbert also owns.

It looks like a very logical progression toward Rocket replacing Quicken Loans—maybe sooner than we think.

When they launched Rocket’s new branding January 31, 2019, they refined the Rocket logo to a modern, clean look that can apply to all finance and real estate services, including Rocket Mortgage for home loans, Rocket Homes for home buying/selling services, Rocket Loans for personal loans, and Rocket HQ for credit report and financial advice.

The rocket ship in the logo was replaced by what Quicken Loans CEO Jay Farner called “the magic O,” which is a red open-bottomed O in the word ‘Rocket’ that enables them to be creative with brand promos by placing topical things inside the O. 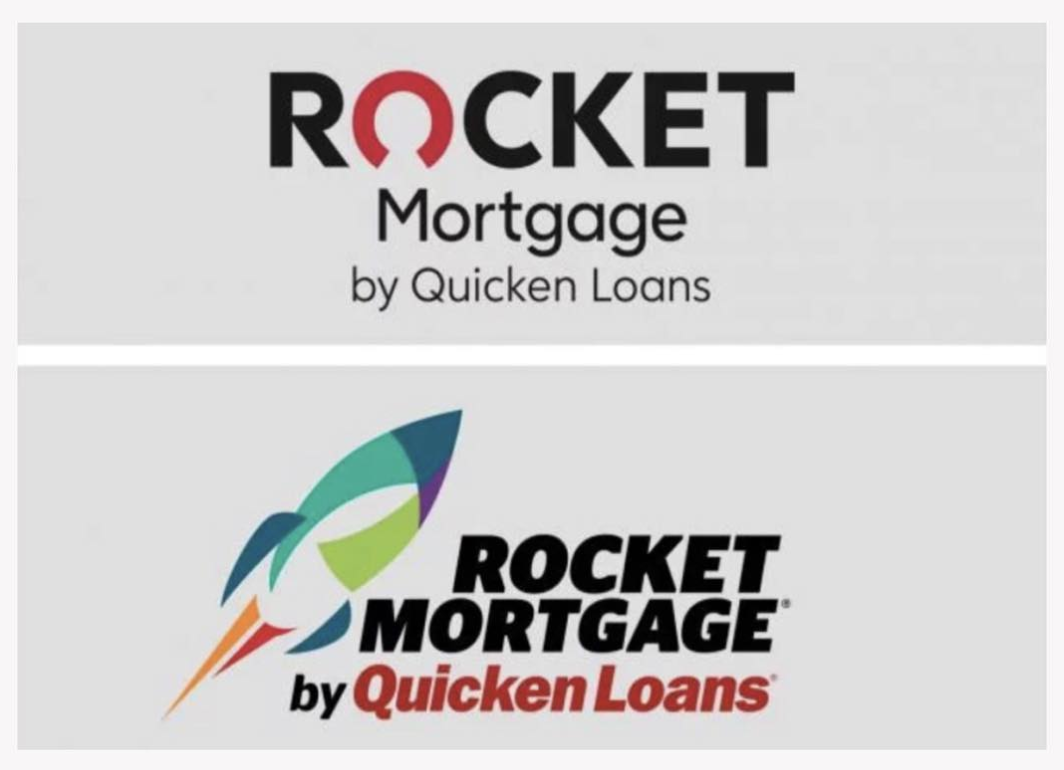 Here at The Basis Point, we’ve been calling Rocket’s new O the “circle of power” instead of magic O, for two reasons:

(1) We have great respect for Dan Gilbert’s circle of power. In addition to Quicken/Rocket, there are about 100 other family companies in the circle of power that all work together to revitalize cities like Detroit and Cleveland as well as serve millions of consumers with financial advice, sports, and pop culture with companies like song lyric company Genius and sneaker exchange StockX.

(2) The branding versatility and creativity they get by being able to place imagery into the O makes it a circle of power. We’ve been playing around with the circle of power with our creative director Dennis just for fun—because we’re fans and because brand consulting is one of our core businesses, so we can’t help ourselves.

Here are some we did just messing around back when it was first announced:

And here’s a couple we did after the Rocket Mortgage FieldHouse announcement yesterday. We’re a bit surprised they didn’t give the world a look like this when they announced it, especially since it involves the Cavs, another family company. Surely the Quicken/Rocket brand scientists are cooking up many inventions with the circle of power, but we humbly offer this fan art from our lab in the meantime.

And we’ve got more to come on the Rocket circle of power, including a hometown tribute from our publishing director Spencer who’s raised in Detroit just like Quicken/Rocket.

Now to bring this story full circle back to the Cavs’ new home, here’s a classic tweet from a smartass sports fan, LOL!

The Cavaliers are right to change the name of their arena to Rocket Mortgage Field House because there is going to be 30-years of very low interest there.

What’s Your Take? Here’s mine: when old logo (bottom) launched 2015, I was medium but consumer-y feel grew on me. Now they’ve gotten more sophisticated and clean as Rocket brand expands into full ecosystem of homeownership services, and as designer @bogdan.geana from @lippincottbrand said: “Overall, the logo balances the idea of speed that's inherent in the name with a bold, simple design that inspires confidence.” Also Bogdan/Lippincott design has this red “magic O” that’s open at the bottom – it’ll be used by all Rocket brands (@rocketmortgage for home loans, @rockethomes for real estate services, @rocketloans for personal loans, @rockethq for credit reports & financial advice, etc.) to customize the logo for their services and/or sponsorships. For example if Rocket Mortgage sponsors a golf tourney, a golf ball can be in the O. Given the diverse business lines and sponsorships (across all sports including a big push in e-sports), this feature adds a ton of creativity to an otherwise super clean look. Knowing all this, it makes sense why “mortgage” is de-emphasized relative to old design. Rocket will be many things going forward. And also notice how just the magic O is used for the social profiles. Imagine when they start putting imagery into the Os. I applaud Bogdan, Lippincott and QL/Rock crew for creating something that both anchors the brand and keeps creative options open. Can’t wait to see how it plays out. PLEASE COMMENT W YOUR TAKE, I WANT TO KNOW! #brand #branding #brandingdesign #logo #logodesigner #logodesigns #visualidentity #rebranding #rebrand #quickenloans #rocketmortgage #fintech #personalfinance #housing #homebuyers #firsttimehomebuyer #firsttimehomebuyers #realtor #realestateagent #mortgage #mortgagebrokers #mortgagebroker