Here’s a quick recap of tax proposals in Washington that may trim or eliminate homeowner tax benefits. There are now House and Senate versions of the tax bills, and three main tax benefits are subject to revision:

2. Today homeowners get to deduct all property taxes they pay when filing their taxes each year. The Senate bill eliminates this benefit. The House bill caps this deduction at $10,000. Let’s pretend you put 20% down when you got the $500,000 loan in the example above. This means you bought the home for $625,000, making your estimated annual taxes about $7,812. In this scenario, you’d still get to deduct the full $7,812 under the House bill (since it’s less than $10,000), but you’d lose this deduction with the Senate bill.

3. Today homeowners are exempt from paying capital gains taxes on gains up to $250,000 (or up to $500,000 for married couples) when selling a primary residence. If you lived in the home two of the last five years, this means you’d pocket home appreciation up to $250,000 (or up to $500,000 if you’re married) tax free when you sold your home, then pay capital gains taxes on any appreciation above this amount—the calculation is a bit more complex, but this is the gist. Both House and Senate bills increase time in the home from two-to-five to five-to-eight years.

I said on twitter cutting/eliminating capital gains exemptions on home sales (#2 above) would further limit housing inventory because sellers don’t want more tax hits, and deputy chief economist Sam Khater at CoreLogic schooled me on this and also the mortgage interest deduction (#1 above). Here’s the thread: 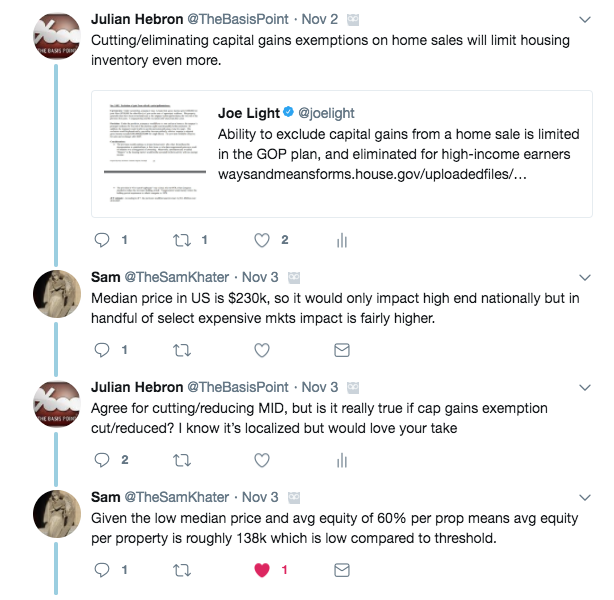 Whether or not [mortgage interest deduction (MID) changes] would impact homeowners in such a way that cripples the housing market remains to be seen. There’s been growing consensus over the years that the MID isn’t as critical to homeownership as once thought. Homebuilders were even ready to agree before changing their tune last weekend. But that doesn’t mean capping the MID won’t hurt.

Perhaps the most insidious and least-intended side effect would be to discourage owners of homes with mortgages well over $500k from moving (all existing mortgages as of November 2nd would be grandfathered with no deduction cap, even if after future refinances). That would put additional pressure on a housing inventory situation that’s already precarious, to say the least.

Both of Matt’s recent pieces on this topic below, and both are important reads.
___
Reference:
–Just How Much Could Tax Plan Impact Housing? (MortgageNewsDaily)