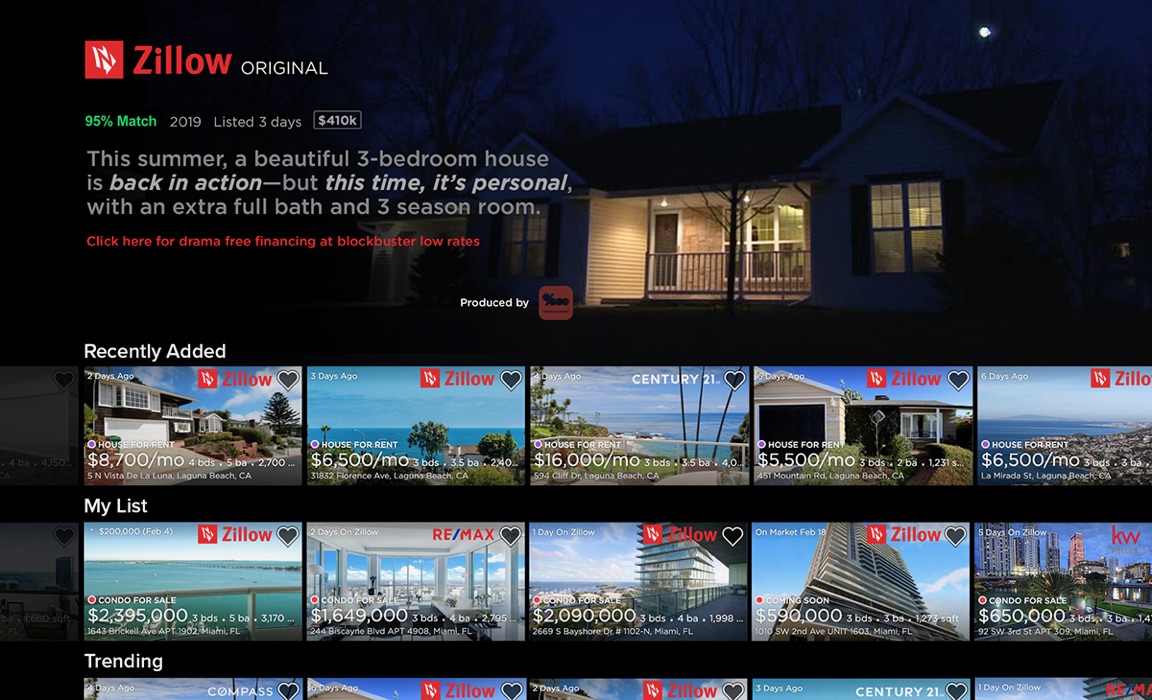 Aside from starting to dominate the Oscars, Zillow now looks like Netflix in many ways. Let’s break it down in 4 segments.

1. ZILLOW WAS BORN WITH NETFLIX DNA

During last week’s 4Q18 earnings, Zillow’s new CEO Rich Barton talked about rotating their “leadership triangle.” Because he’s not new—he co-founded Zillow and has run the long game from the boardroom with co-founder Llyod Frink while CEO Spencer Rascoff ran day-to-day the last 9 years and grew revenue from $30 million to $1.33 billion.

Rich now rotates back to CEO to run day-to-day on Zillow’s new 5 year revenue target of $22 billion, while Lloyd rotates to Rich’s executive chairman slot and Spencer rotates to board director so the two of them can run the long game.

Now the Netflix connection: Rich has been on the Netflix board since 2002, which was 4 years before he launched Zillow.

As they say in the movies: this is no coincidence.

Like Netflix went from DVDs to streaming AND original productions (on Rich’s watch), Zillow is going from home listings to realtor/lender leads AND home buying, selling, and financing.

I use ‘and’ in caps because Zillow’s got such a huge audience—7 billion visits in 2018—they can serve you directly AND partner with the real estate industry to serve you.

You already know how Netflix shows you stuff. When you browse, you see Netflix originals plus you see all the content other studios serve through Netflix.

Why? Because last April they started buying homes directly from sellers, and want to ramp up to buying 5,000 homes a month over the next 3-5 years.

How? Fill out a form on their site, get an offer. If you accept, you close in days. If you decline, they pair you with a local non-Zillow agent who can list your home for you the traditional way.

Listing with an agent might be slightly cheaper than the 7% of sales price you might pay to sell to Zillow (or other instant offer firms like Opendoor), but it doesn’t have the same certainty or speed.

Since 61% of you sellers are also buying a new home, you’ll need a new mortgage. Zillow bought a mortgage company last year so they can also do your loan—whether you buy your new home directly from them or through another real estate company.

So you might hit Zillow to look for a new home or ask them to buy your existing home.

Either way, this is as close as the housing industry has gotten to a one-stop shop.

Zoom in on The Basis Point’s envisioning of it below (CLICK TO ENLARGE).

Of course Netflix-red Zillow is a joke, but we included the Originals concept for Zillow owned homes vs. homes posted by other brokerages. And you can see how mortgage promos write themselves.

Since Zillow believes today’s mortgage process is as clunky as getting out your wallet to pay your Uber/Lyft driver, you can bet they’ll simplify, starting with mortgage fee discounts.

3. HOW REAL ESTATE INDUSTRY IS IMPROVING FOR YOU RIGHT NOW

Zillow isn’t alone on the pursuit of a one-stop shop for you. Here are a few other examples:

– Last January, I rolled out the mello one-stop with Anthony Hsieh and Chris Heller at loanDepot, the nation’s 5th largest retail lender.

– Last September, after years of fine-tuning, the nation’s largest retail lender Quicken Loans expanded Rocket Mortgage into Rocket Homes to bring the buying/selling into the financing.

– Opendoor keeps expanding instant offer homebuying to new cities, keeps doing smart deals to help you trade your home as easy as your car, and has billions in backing from the world’s largest investors.

– Knock, which also just raised a ton of money, will buy your new home and move you in before you sell your old home.

4. NO MATTER WHO PERFORMS BEST, YOU WIN GOLD

The race is on in a housing convergence trend I laid out 1 year ago.

Lenders, real estate brokerages, instant offer companies, and media/tech companies are all scrambling to give you a golden home buying, selling, and financing experience. And we haven’t even seen big tech like Amazon step in yet.

So let them scramble, and let The Basis Point explain it. You win all around.

And as for Zillow one day dominating the Oscars, don’t tune out. There’s a Hollywood play brewing. More on our next episode…

– Who’ll be the Amazon of housing?