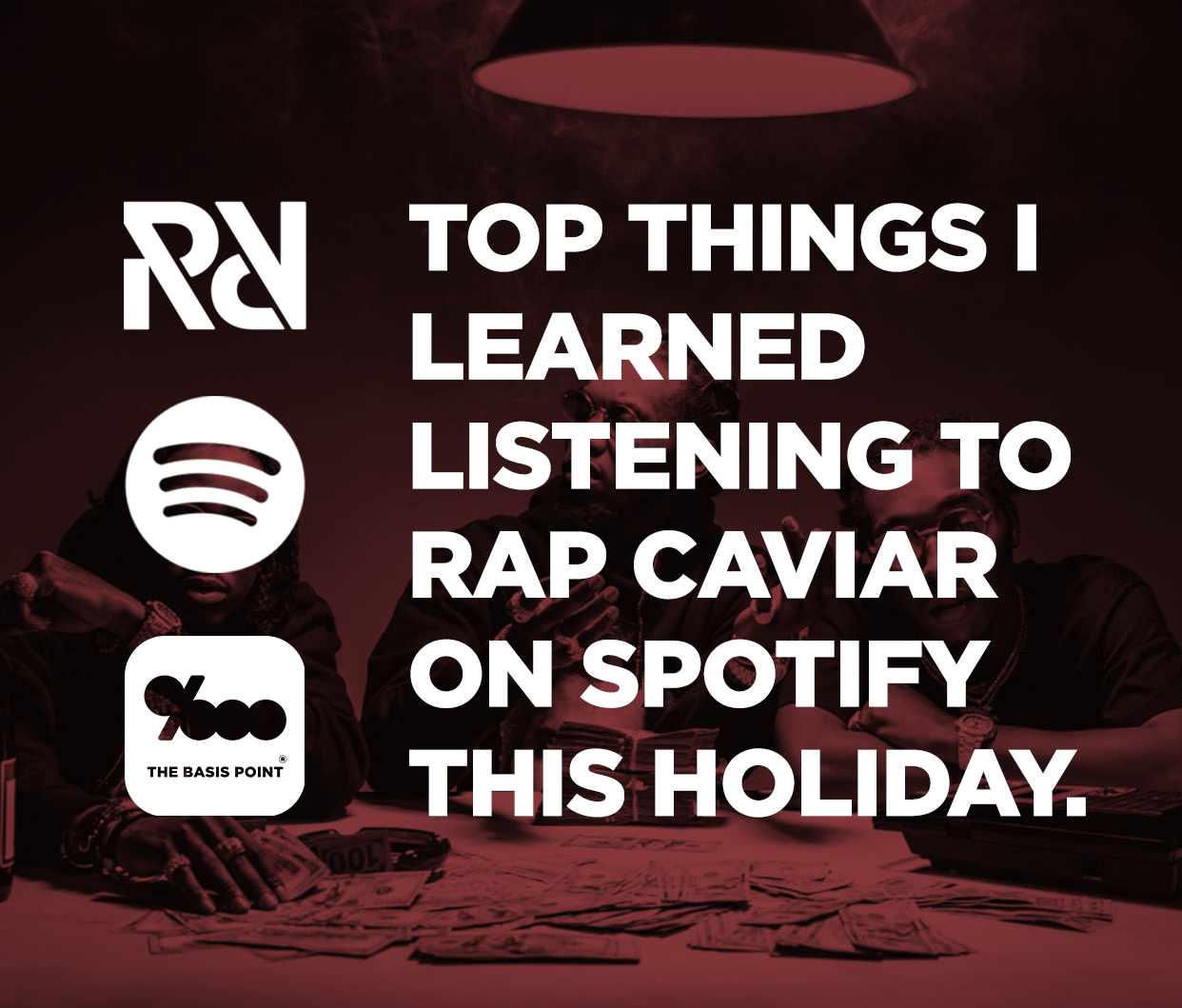 Fall ends today and Spotify’s best playlist moves fast, so let’s recap the rap before we wrap the tree crap. Here’s what we’ve learned listening to Rap Caviar the past 3 months.

1. Eminem and Logic didn’t sharpen Rap Caviar’s Fall mood as much as predicted. Both dropped down the list fast, but rose much higher elsewhere: Kamikaze’s billion-ish streams in 3 months proves old dogs can still blow shit up, and Logic jumped to baller status by tipping off NBA season in October.

2. Fall mood was mostly about ‘drip’ references, which denote swagger and coolness, but did too many drips water the shit down?

3. Everyone’s in the mood for drugs. Travis Scott makes the best case for shrooms since I OD’d way back in Lake Havasu and was saved by Beastie’s Lighten Up instrumentals. He’s also codeine keen and Let It Fly higher still with Adderall. Famous Dex down to throw back a Perc. And did I mention Travis Scott likes drugs?

4. Drug ballad glamour is core to rap and vicarious fun, but also a confessional and redemption path. I know Juice Wrld lean wit me on this.

5. Despite confessionals, Mac Miller tragically veered off the redemption path, dying of an OD September 7. He was 26 years old. He’d openly discussed his dependence on lean, a combination of codeine and promethazine. Here’s one of his drug takes from a recent interview: “I really wouldn’t want just happiness, and I don’t want just sadness either.” Spoken like a true artist and explorer who refused to be categorized. Mac was universally loved by peers and fans. May he rest in peace, and may his OD elevate Self Care throughout the rap community.

6. The community is strong and organic. Producers and MCs meet on social media and team up on beats and rhymes. Best story this Fall was Tax Taylor & Nick Mira meeting on twitter, then teaming up on Fuck Love production for XXXtentacion.

7. Fall’s best storytelling song is Mona Lisa by Lil Wayne and Kendrick Lamar; while best party song is Zeze by Kodak Black, Travis Scott and Offset, with its funky ass Caribbean steel drums; and dopest lyricism is Lucky You by Eminem and Joyner Lucas.

8. Best money/hustle worship song is Fr Fr by Wiz Khalifa and Lil Skies, and I can see how No Stylist by French Montana and Drake is popular, but it’s ‘iced out’ refrain is betrays the title, so the winner of Fall’s DIY swagger song is Mo Bamba by Sheck Wes hands down.

9. Speaking of songs featuring ice and style, Rich The Kid’s ‘freezer on my arm’ lyric on his Famous Dex Nervous feature makes me smile, and Nicki Minaj, with her colorful hair don’t care, gets best feature of Fall on Fefe by 6ix9ine.

10. And speaking of women in rap culture, the Me Too movement has not reached this community. Of 51 Rap Caviar songs to end Fall, the word bitch is used 237 times on all but 12 songs for an average of almost 5 per song, and the most being 22 uses in one song, which is On Me by Meek Mill featuring another top woman rapper Cardi B.

12. Which brings us back to our question of whether ‘drip’ references got too watered down this Fall. I thought so until the refrain of this same song cleans it all up: “I don’t throw bottles I throw shots, all this drip on me need a mop.”