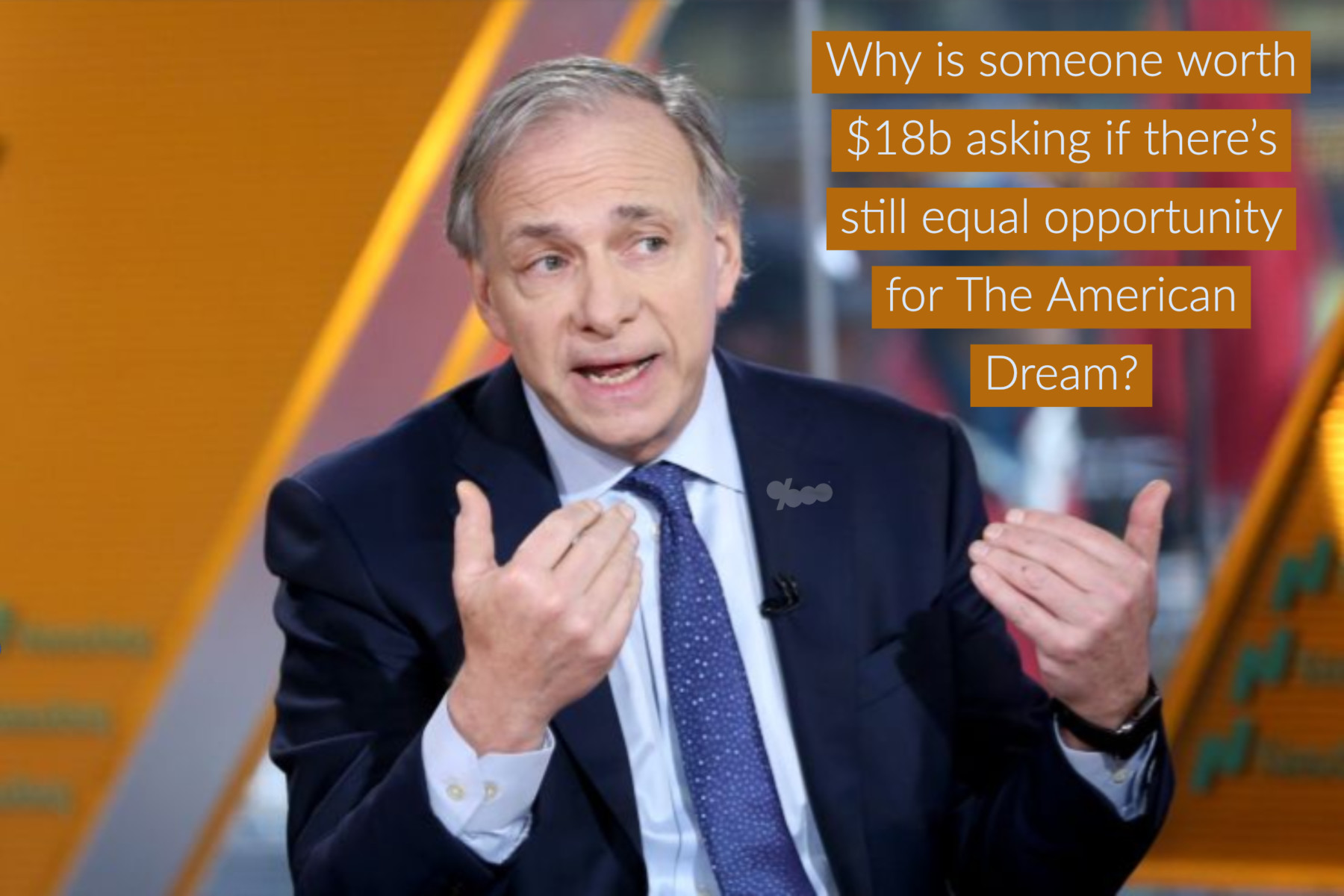 Do we agree capitalism is not working? That’s what hedge fund giant Ray Dalio has been asking lately.

Yes, a person worth $18 billion is questioning the root of our system. And I don’t think it’s just because he’s worried about the pitchforks coming for him.

That’s part of it, surely, because we now know even supposedly safe doomsday hideouts like New Zealand for the super rich aren’t totally safe.

But his rationale is mostly rooted in access to affordable education and healthcare.

If fundamental building blocks for gaining qualifications and relevant skills (education) and safety nets for taking risks like changing jobs or starting companies (healthcare) are weakening, the American Dream spirals down pretty fast.

That’s the root of the problem, and sadly it’s hard to solve because of how the American Dream is sold.

The broke think they’re going to be rich. This is the dream for all of us, and it’s coded into our American Dream DNA. Of course we can work through whatever we’re doing now and rise above. All education and pop culture tells us so, and now most media we consume tells us so, because most media we consume is social, and social media drives the golden age of entrepreneurial porn/evangelism.

Either way, all of our American Dreams are encoded with rose-colored scenarios—this is capitalism, and we are capitalists, end of story. John Steinbeck supposedly believed socialism never took hold in America because the poor don’t think they’re working stiffs but instead millionaires in the making. This hope has fueled us for generations.

I think this hope is healthy. It IS the American Dream. And to be clear: I’m a capitalist.

But Dalio is right. Equal access to the American Dream is becoming less equal in current state of capitalism’s evolution.

Then you’ve got folks like Alexandria Ocasio Cortez who are quite clear about being socialist, and call capitalism irredeemable.

Are we really looking to burn down our society’s economic philosophy, or is rebranding capitalism as socialism just a good way to restore hope right now? Because all any of us really want is to feel like we’re better able to pursue our dreams.

Hope is what this all comes down to. Hope prevents the pitchforks from coming out.

I think Dalio’s and Ocasio Cortez’s views actually reconcile to say the same thing: equal opportunity for the American Dream. This fuels hope, which keeps everything working.

The rest is political branding. The politicians who solve this will guide us through the next iteration of our capitalist society.

Until then, all we can do is keep working…