The new state of work is 25/8. You gotta be on all the time, always thinking about what’s next and how not to be caught flat footed as the innovation economy speeds up each month and year.

We talk about this a lot and in April I parodied the constant ‘crush it’ vibe that pervades our careers now. But then the 25/8 parody grew on us, because it ain’t like we’re immune.

So as The Basis Point starts year 2 as a management consultancy and media firm, I wanted to share a few reflections on what I think makes us successful as corporate workers, startup hustlers, and advisors to corporations and startups.

1. STRENGTHEN STRENGTHS BEFORE SHORING UP WEAKNESSES

For the first half of my career, I focused on developing weaknesses of mine, my team, and my clients. This is what school and work teach us.

I agree we must get better always. But should we focus mostly on becoming better at what we’re not great at, or becoming the greatest at what we’re already great at?

It’s usually the former. I didn’t really learn this until I got deep into managing people. For example, I learned that if you let a pretty great salesperson run full speed while you observe and fine tune them along the way, you’ll tap into their true greatness.

“Guardrails” is a phrase I use a lot now. Here’s the keys to the race car, and watch out for these certain guardrails. You can ding up the car a bit on the guardrails, but if you drive it off the cliff, that’s it for you.

I’ve gotten greatness out of all types using this enough-rope-to-hang-yourself approach, and I’ve grown a lot because of it too. It taps into people’s passion while also giving them accountability that doesn’t feel authoritarian.

This focus on strengths works wonders for letting teams shine. But I still struggle personally with placing too much emphasis on improving my weaknesses instead of turbo charging my strengths.

In the corporate game, focusing on weaknesses means saddling yourself with projects and politics that bog you down, and I eventually learned to remain focused on what I’m best at—but this only came after I had enough management clout to be able to pair team members with work I’m weaker at and they’re stronger.

In the startup game, you have to do it all or at least be heavily involved in it all, especially in these early stages where I’m shaping a vision for 2 business lines (consulting and media). It’s exhausting to focus on the stuff I’m weaker at, but until you get scale that’s the way it is.

In the game of advising startups, our strengths are what we sell as our capabilities, so it all works out great. We can come in with total focus where most team members are focused on a lot of internal machinations that distract them from executing on certain sales and marketing initiatives, but that’s why they hire us and our job is to make them look good. This is my favorite part of the consulting work we do. 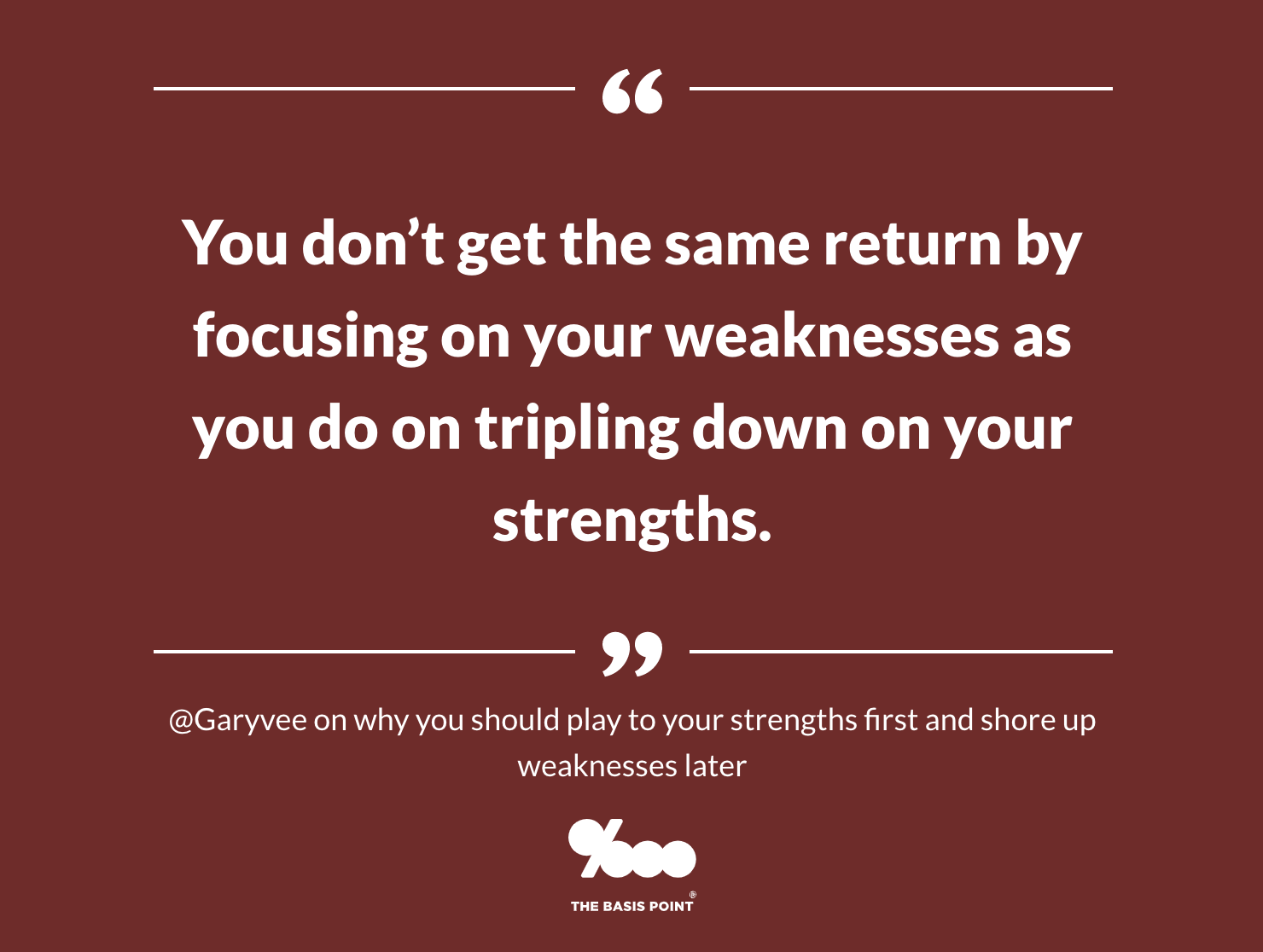 2. DON’T JUST LOOK UP FROM YOUR WORK, LOOK UPON IT.

Writers often say I hate writing but I love having written. Self-professed King Of The World James Cameron is a great example here. He detested writing the Avatar sequels.

To him, the scripts are just the means to a much bigger end. He’s made some of the biggest movies of all time with Terminator, Titanic, and Avatar. And the scripts are how he looks upon the vision.

Same goes for us. Most of us are too busy knocking out tasks. But what vision are you going for?

Corporate types are most guilty of this because they’re buried in tasks and too often aren’t given enough power to shape vision, when ironically the folks buried in tasks best know vision on how burdensome tasks can be streamlined.

But startup types suffer from this too because there’s often too big of a breadth of things to get anything done effectively.

This is why it’s so important to focus on the endgame always. If you’re too buried in your work, you can’t look upon it and see where you should prioritize tasks.

This summer solidifies this lesson for me. I decided to spend the first half of summer working in London and Europe while The Basis Point is in the middle of a growth phase.

Crazy/stupid? Most would say yes (including many of my inner voices) but I did it anyway.

Expanding our our view of financial innovation to the world’s financial centers outside the U.S. makes us better at advising our U.S. clients and expands our future opportunities.

Who do we always love in life, business, and pop culture? Those who seem impossibly good at everything.

I’ve learned the secret to these people: they work 25/8 and eventually won over teams who do the same.

All the greats never stop, and what makes them special is they’ve found a way to make it not annoying to their teams.

Bosses shouldn’t expect the same furious work from every team member by default, they can only hope to tap and inspire greatness so that drive can be born from within each team member.

This is how true team chemistry is built, then eventually those around your team all look at you and wonder how you did it.

It starts with never stopping. And it ends with winning those who believe the same things.

– Watch Me Smash This 4am Smoothie. Then Watch Me Crush This 25 Hour Day.

– The Basis Point Is Open For Business