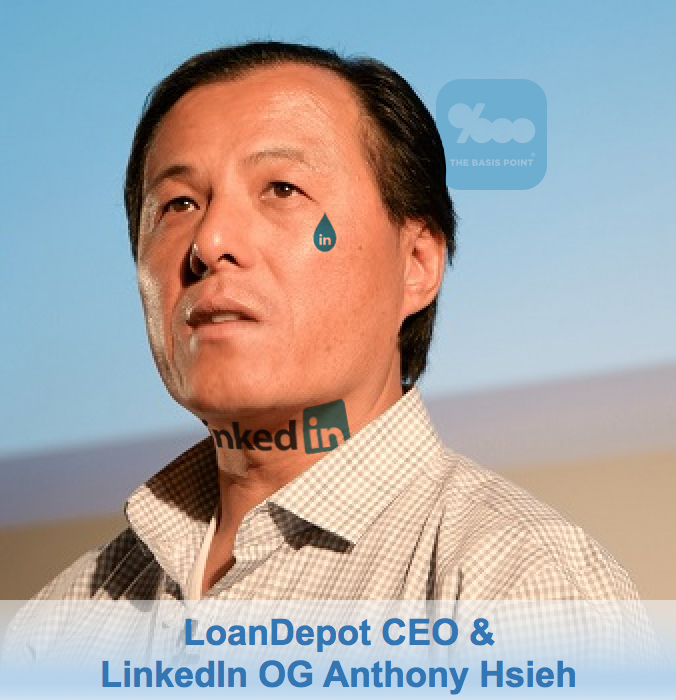 Disruptors inspire those they’re close to, but scare or annoy most others. And disruptors barrel ahead while scared or annoyed people sow doubt or ignore that which annoys them.

That’s why I have to laugh when I hear consumer finance industry colleagues saying stuff like:

“OMG Anthony Hsieh has taken over my LinkedIn feed, it’s so annoying.”

I laughed even harder this week when one of my smartest (and smartass-est) industry colleagues and friends Justin Brilman said:

“I wonder if Loan Depot has an incentive program where they pay you per post on LinkedIn.”

At least he gets it and made his comment in jest. The rest of the annoyed folks need to understand what’s really going on.

Loan Depot CEO Anthony Hsieh owns your LinkedIn feed because he’s engaging constantly to single-handedly brand his firm as a national player for a fraction of the cost firms like Quicken and SoFi. And while you’re busy being annoyed and/or ignoring it, he’ll still spend the same billions that the biggest players are spending in the next couple years, but that money will focus more on customer acquisition than pure branding. That’s disruption.

The bulk of LoanDepot’s volume so far (they funded $38 billion last year) is from two acquisitions they did: Mortgage Master and iMortgage. Do you think those two salesforces can mentally let go of brands they worked years to build if there wasn’t a bigger, better brand reminding them everyday of their combined power?

Every day with every post, Hsieh proves to all those people—and everyone else in the firm—that they made a good decision. He also fuels their incessant posting by commenting on and liking all their stuff all day. It feeds on itself, and while you’re annoyed, they gain momentum. Whether that momentum culminates in team or morale growth, there’s no downside.

Opposite the annoyed folks on the spectrum are the fawning folks. They’re overly inspired and try to imitate. Loan Depot team members get a pass on this because they’re following the boss’ deliberate plan and voice. But it’s not a good look for other execs to try to copy Hsieh’s gangster style. These imitators are the most annoying thing about his LinkedIn takeover. Some notes for these folks:

– Hsieh owns LinkedIn because he’s a storyteller. He’s telling his own stories totally unfiltered. Imitators are either trying to sound just like him and it comes off as story-less platitudes, or their posts reek of conference room consensus and utterly lack voice.

– It’s not about you and your vision. You are not the hero of the stories you tell. Your customers, team, and partners are the heroes. It seems like he’s the hero because of his voice and frequency of posting, but he’s almost never the hero of the stories he tells. Also his team comes in later with their comments and their own posts making him the hero.

– The secret is to be great at telling stories about others but have such a definitive voice that people come back to check for who you’re going to talk about next—so the hero wins, and you win.

– Finally, and most important for all you imitators: don’t run out and get tatted up like Hsieh has in this exclusive first-look photo. Find your voice first. Then you can get inked in.

___
Related:
– The Very Worst Of LinkedIn

– A Word On Giving Voice and Substance To Your Corporate Content