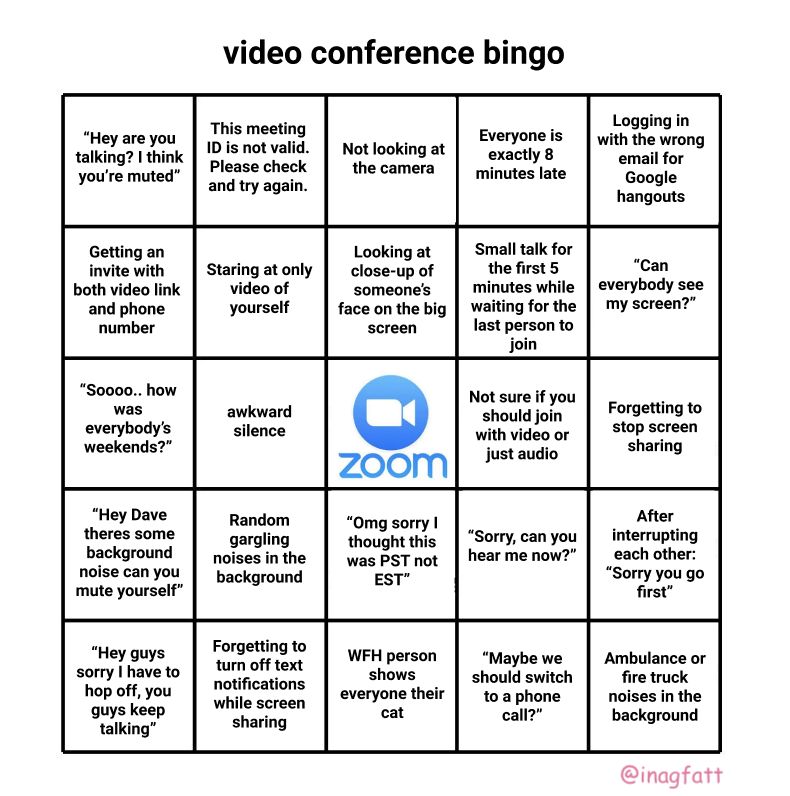 Welcome to the first business day of Fall, and here’s a conference call Bullshit Bingo game for you to ease in.

Thanks to @inagfatt for this gem, and I’ll start by making a special rule.

Or is it if you say the bottom left phrase, you win?

“Hey guys sorry I have to hop off, you guys keep talking” should be everyone’s career credo.

I need to focus on what really matters, and this recurring meeting probably isn’t it.

Zoom is genius really. It took something we all hate, and polished it up. That’s the definition of tech disruption.

So we can rip Zoom all we want. And make no mistake: I will rip away because I hate conference calls as much as email now that Zoom has made everyone expect video calls.

But conference call bullshit bingo and other jokes aside, Zoom is genius for 3 reasons:

1. Be Everywhere At Once: Video calls are truly great for saving time and showing teams you’re fully engaged even if you’re not sitting next to them.

2. Build Your Kid’s Youtube Dream: My son wanted to start a Youtube channel last year, but only do it from an iPad and with screencast and audio. Until iOS upgraded screen record functionality, Zoom was the solution. And it still is mostly, because it’s easy and brought me a ton of joy supporting my son.

3. Bail On 1 Call Per Month: Zoom’s story is about reinventing a total commodity. They did this by stepping away from existing structure and looking at it fresh. Most jobs are a commodity. Unless you have the courage to step away periodically for a fresh look at reinventing yourself and your role.

This fall, make it a habit to say that lower-left phrase on a call at least once a month then bounce.

It’s all bullshit in the end anyway, so this is how you step away and win the game.