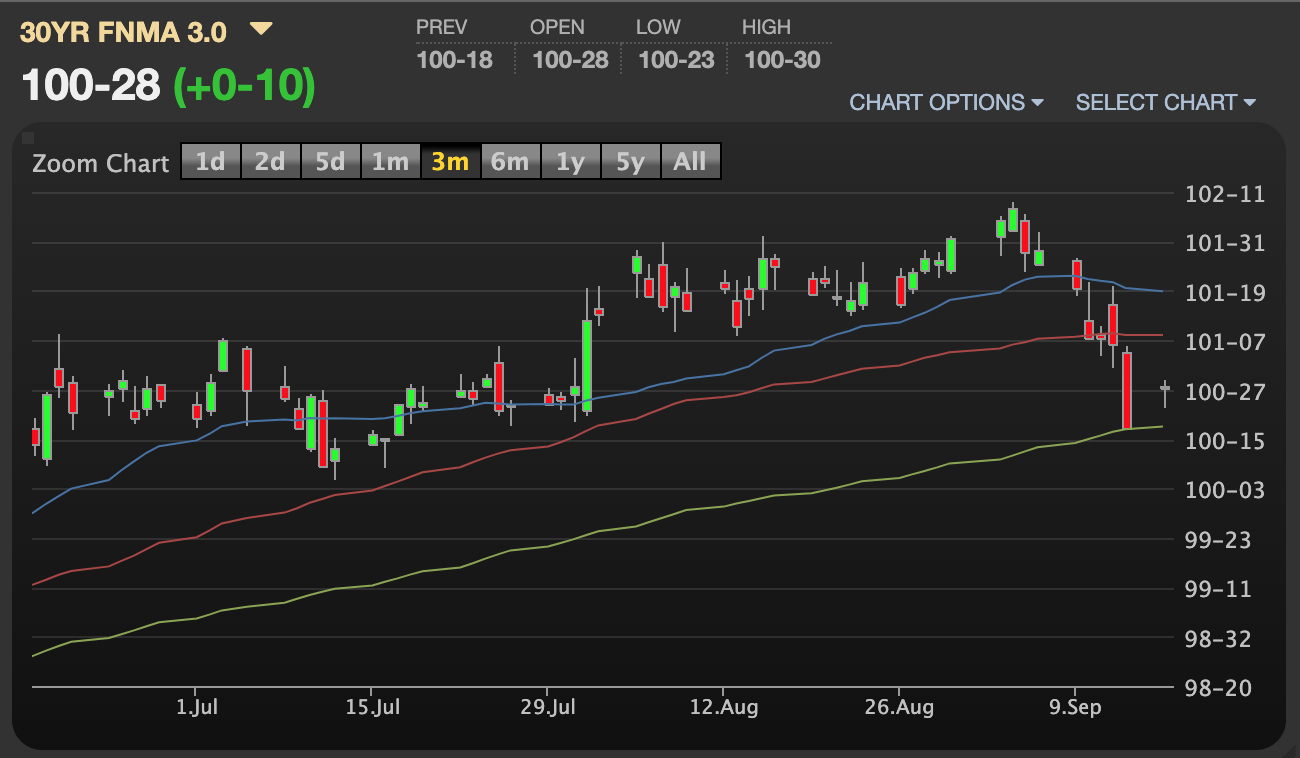 Rates spiked about 0.4% last week, which begs the question: is the 2019 mortgage refi boom over?

But no rate trackers we see in the mainstream press are noting this yet.

Let’s take a look at where rates are, and where they might go as we move into Fall.

WHAT RATES ARE USED IN HEADLINES?

Last Thursday, they said 30-year fixed rates were 3.56%, which captured some of last week’s rise. This was up from their report of 3.49% on Thursday, September 5.

Meanwhile Zillow publishes their rate ticker on Wednesdays, and last week they said 30-year fixed rates were 3.75%. This was up from 3.6% on Wednesday, September 4.

Why are they different?

Freddie Mac surveys lenders, and lenders provide data based on how rates were looking in the previous week. So by the time the Thursday report comes out, the rates are expired.

You can see from last week’s Zillow data their rate index is a bit more timely. They captured rates rising last week more accurately because their rate ticker is rates lenders are quoting on Zillow in real time.

This chart from Mortgage News Daily is the most accurate rate picture through this morning. This is a Fannie Mae mortgage bond chart and each candlestick on this chart is one day. You can see the red that began last week as rates started rising.

We won’t see this captured in the Zillow or Freddie Mac rate data until this Wednesday and Thursday respectively.

Rates change in real time daily, and Mortgage News Daily is the only publicly available place you can see what’s going on when rates move super fast like this.

Between November of last year and early-September, rates dropped a full 1%. This opened up the refi market to about 10-20 million homeowners, depending on how strictly you count the numbers*.

The Mortgage Bankers Association started 2019 with projections of $1.613 trillion loans being done during the year. Of these, $381 billion (24%) were refinances, and the rest were home purchase loans.

On their latest August 15 report, the MBA upped total loan volume projections to $1.892 trillion. Of these, $633 billion (33%) were refinances, and the rest were purchase loans.

Even as rates rise right now, there are still plenty of refi opportunities, so you need to check in with your lender.

Here are a few tips to consider in a volatile but attractive rate market:

– If you want to refi but are worried rates will drop later, you have 2 choices:

1. Ask for a no-cost refi. This will give you a slightly higher rate, but leave you free to refi again without losing closing cost money if rates drop later.

– The attack on Saudi oil production over the weekend is giving a brief respite to the rate spike. And because of Trump’s tangled Saudi interests, we don’t know how the U.S. will react. But if it means military conflict, rates would drop further.