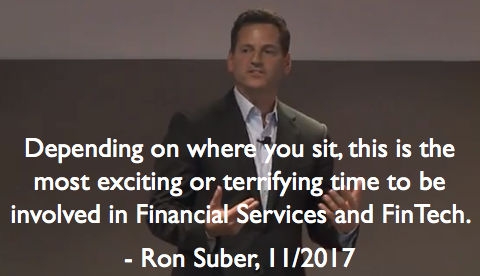 Quote of the month, or perhaps the year, comes from the “mayor of fintech” Ron Suber. He’s former president of Prosper, which is among the first pack of high profile fintech lenders along with Lending Club and SoFi. All three (and countless others) have had their challenges, but the space is still evolving rapidly as startups figure out how to lend and incumbents figure out the technology.

In June, Ron stepped down as head of Prosper (whole history here from Peter at LendAcademy) to enter not retirement, but what he called rewirement—acknowledgment that the game is never over, and proof of his branding skills.

Ron was quiet since then but just touched in with an update on the first 120 days of rewirement, which contains this quote:

Depending on where you sit, this is the most exciting or terrifying time to be involved in Financial Services and FinTech. Giant winds of change are blowing now.

This hit home for me as an incumbent lender who follows fintech startup lenders closely. It’s indeed exciting and terrifying to watch the technological wave wash over consumer lending because it means lending must be at scale. Sure there will be room for small players, but consumer lending—like so many other disrupted industries before it—will be an increasingly winners-take-most proposition.

Here’s where we are now on the startup/incumbent race for market share:

– Incumbent lenders have an advantage lending at scale because they mastered scale regulatory compliance and funding infrastructure long ago, while startups took awhile to learn that you can’t disrupt regulation, and peer-to-peer isn’t a viable scale funding model.

– Startups have an advantage acquiring customers at scale because the majority of sales and marketing basis points go to customer acquisition, while incumbents flow the majority of those bps to salesforces.

– One thing that the fintech lending community doesn’t watch closely enough is the mortgage sector—or maybe they do but just don’t publicly acknowledge the competitive threat. This community has been mostly focused on non-mortgage lending like student, personal, and business loans, but none of these firms have established a meaningful foothold in mortgage. Keep an eye out for scale mortgage companies that can move into these non-mortgage products. In the race for scale lending and scale customer acquisition, they’ll be among the winners that earn the most lending business from consumers.
___
Reference:
– Lessons From First 120 Days Of Rewirement (Ron Suber)