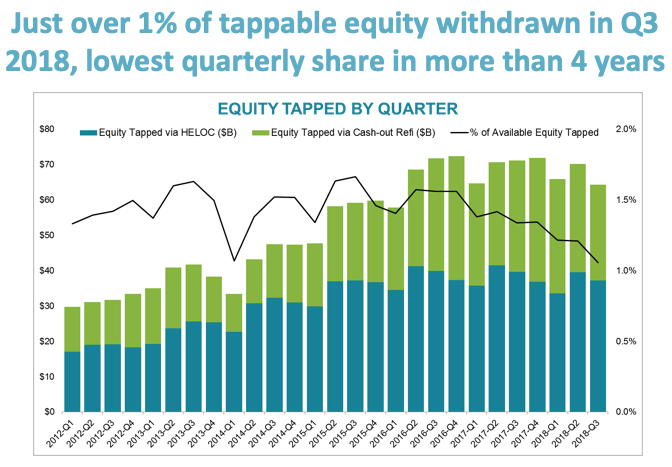 Yesterday, I did a joint presentation to lenders on the state of home equity with Andy Walden, research director with housing data giant Black Knight, and I want to share an important follow up point about borrowing cost when you take cash out of your home vs. using credit cards.

Right now, American homeowners have a total of almost $15 trillion in equity, a record high that blows away the last early-2006 record by over $1 trillion.

Some believe you’re not using HELOCs because you think the rates are too high. Check out this chart showing how HELOC rates rose twice as much as 30-year fixed rates in the past 2 years. 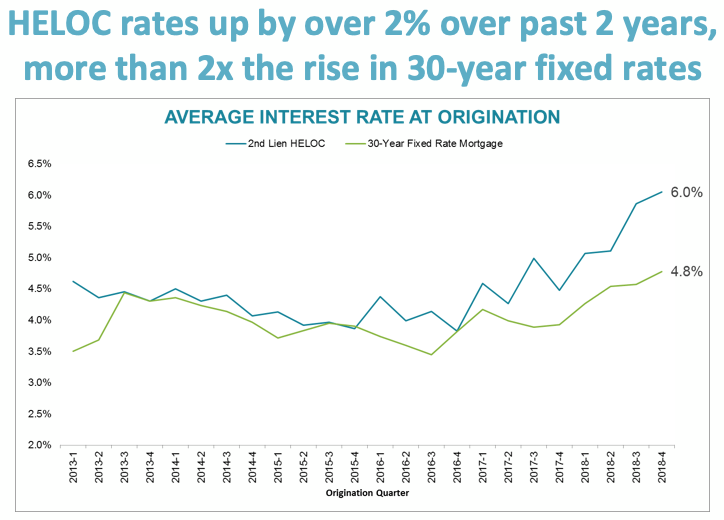 The rationale says, with rates on 30-year first mortgages so low, you’re more inclined to refinance your first mortgage to take cash out than to use a HELOC.

But you’re not really doing that either. As the black line in this chart below shows, you’re tapping your home equity less even though equity is at a record high. And this chart also shows a reasonably even split of about 60/40 between refinancing your first mortgage to get cash out vs. using a HELOC.

Here’s the craziest part: one-third of you are paying for home improvements with credit cards.

Here’s what you need to know. If you’re a homeowner with equity who needs cash, rates on a HELOC and rates on credit cards move up and down the same way. They’re both tied to the Prime Rate which moves with Fed decisions—when you see a headline that says “the Fed raised [or lowered] rates” it means your credit card and HELOC interest also moved commensurately.

The reason HELOC rates rose faster than fixed rates the past 2 years (per chart 1 above) is because the Fed was rising rates consistently during this period as the economic recovery matured. And this same exact rise happens with credit cards.

So if you’ve got the luxury of having a choice between borrowing against home equity to obtain needed cash, the home equity rate will be lower than the credit card rate, end of story.

Plus if you’re using that cash for home improvements, the interest you pay is usually tax deductible (depending on the kind of improvements) if you use a HELOC.

And even if your home improvements don’t qualify for the tax deduction on the HELOC interest, the rate will always be lower than a credit card, unless it’s a special deal zero-interest card—which we all know is only for finite promotional periods.

I’ll share more on this topic soon. Let me know if you have any questions below using buttons at bottom of site.
___
Reference:

–American Homes Are ATMs Again!! Wait, WHAT?! (The Basis Point)