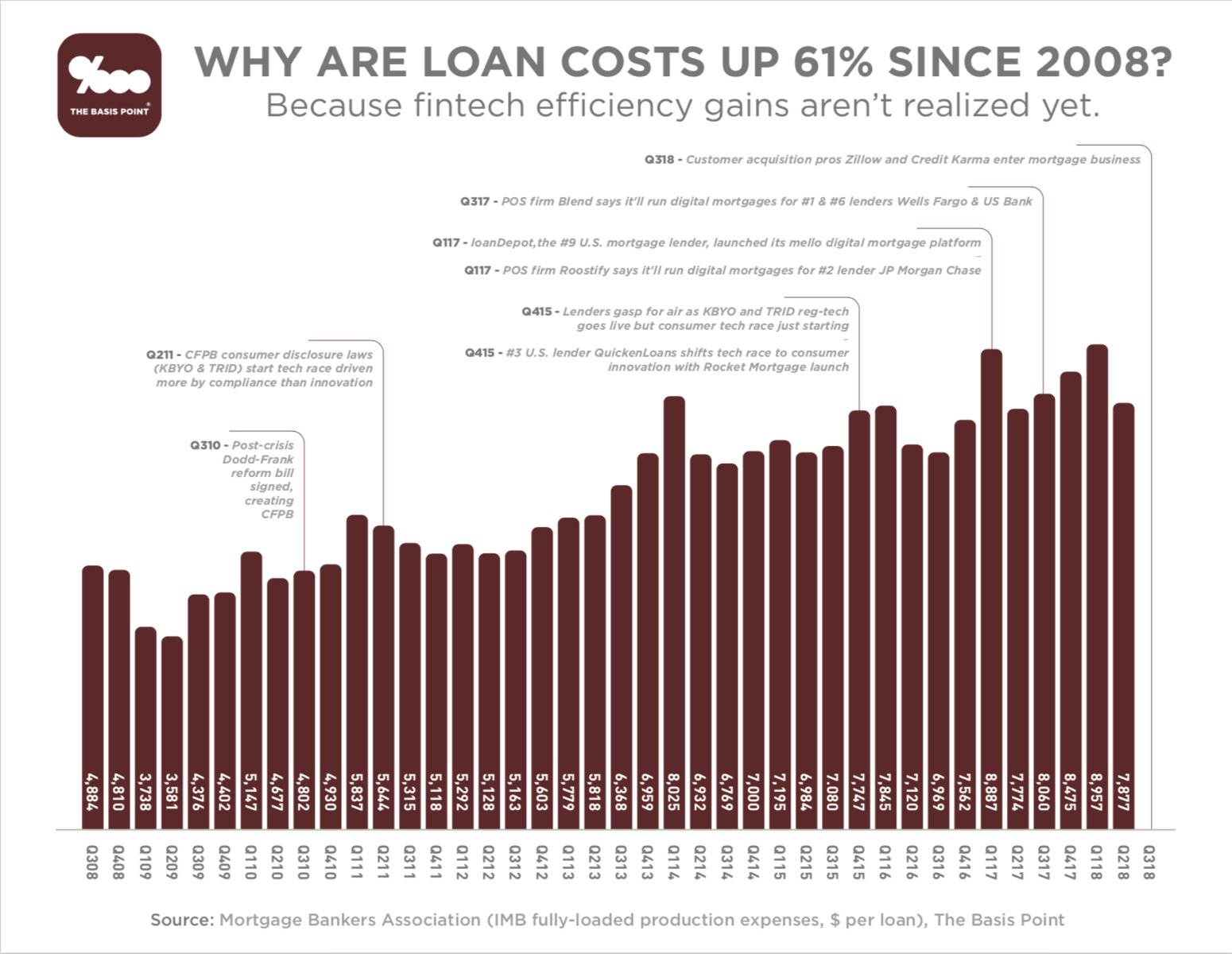 In the lending community, all lenders hear is how all this great new technology will simplify customer and loan officer lives and save money. But when mortgage lenders look at their financials, costs are up. Drastically up in fact: total cost-per-loan in the mortgage industry has risen 61% since 2008.

Last time I covered innovation vs. cost, I said fintech efficiency evangelists aren’t wrong—they’re early. Meaning lenders have been right to invest heavily in critical point of sale (POS) technology infrastructure to simplify the loan process for customers and loan officers, but cost efficiency is taking longer than anyone thought.

Since last time, I’ve done more detailed research, and thanks to my friends at the MBA, I was able to go deeper on cost data. I wanted to go back to 2008 to map costs against critical inflection points in this journey.

The chart above maps out some of these key dates (Click Here or Chart To Enlarge). What’s notable about all of these dates is that they’re mostly tech milestones and regulatory deadlines lenders have been reacting to.

Innovation is supposed to be anticipatory, not reactive.

But in fairness, most industries have Early Adopters who are the innovators, and the rest catch up and even bring in some innovations of their own to create an Early Majority. That’s the state we’re in now with tech infrastructure in mortgage lending.

We’ve got an early majority in the POS space in that most have been spending and that’s why cost stats slope up. But we haven’t seen the efficiency gains yet.

Because average lender adoption of these POS systems is around 55%, with the leaders being in the 70% range.

Old habits die hard, and high-touch customer service in the lending business unfortunately also still means “hey just email me over those new bank statements I asked for” instead of having the customer direct-connect their bank account on your POS system.

Sounds simple enough from customer perspective to email (even if it’s secure, which is a big ‘if’), but lenders know how complicated this is. It adds 6-7 steps to actually get whatever was emailed by a customer into the right system, analyzed by an underwriter, and approved.

All issues with loan process software (captured by the term “POS” for the purposes of this piece) are complex. For this software to be intelligent and not only make customer-loan officer-underwriting doc routing super easy, but also anticipate customer needs and actually do work for loan officers and underwriters, it’s been a 25 year journey.

The first mortgage artificial intelligence systems were launched by Countrywide and Fannie Mae in 1993 and 1995. Then came deregulation which enabled no-doc loans where all customer income and asset “data” was simply made up and keyed into the system. So “intelligent” POS systems were DOA because it was all garbage-in. Which of course led to the biggest market crash ever, then the slow 10-year rebuild you see on the chart.

Mortgage AI has been reinvented with direct-to-source data, so everything going in is clean now. But with 55% adoption, it makes perfect sense the efficiency and cost lift hasn’t come yet. But it will. And when it does, I’ll be happy to be the first to say: