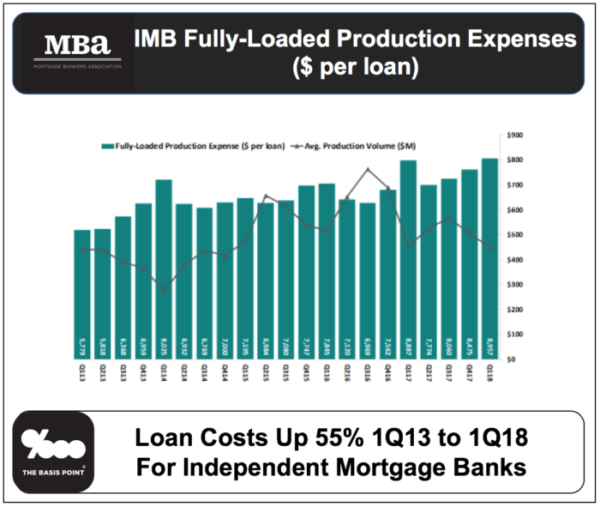 Technology makes consumer loans way easier for borrowers and lenders, and lowers cost all around, right?

But if we use mortgage loans as a model, costs are higher not lower.

The chart above from Mortgage Bankers Association economist Joel Kan* shows costs for mortgage lenders rising 55% from 1Q13 to 1Q18 (click chart to enlarge). That’s a staggering number on its own, and even worse viewed alongside fintech’s prevailing “efficiency” message. So what gives?

The answer is that it may still be too early in the fintech era for cost efficiencies to be seen. This quick history lesson helps explain why:

– May 2011: CFPB proposes major overhaul to how lenders must disclose rates/fees and re-sequence loan process for consumers. These Federal rules come to be known as Know Before You Owe (KBYO) and TILA/RESPA Integrated Disclosures (TRID).

– October 2015: All lenders gasp for air as KBYO and TRID become effective.

It cannot be overstated how difficult KBYO/TRID implementation was for the lending industry. My favorite joke of the day was that TRID stood for “The Reason I Drink.” It required a rebuild of most critical technology systems, re-training of entire organizations, and most firms added lots of new labor cost. Almost no lenders started in 2011, but many started in 2013, and even the stragglers were sprinting in 2015 to meet the October regulatory deadline.

Concurrently, there was already a tech race to deliver a better consumer process, which turned into an outright scramble after Rocket Mortgage launched a month later with ubiquitous marketing support that’s only increased since.

After Rocket, there were 4 notable disruption points that are representative of the broader industry tech race:

– March 2017: loanDepot, America’s ninth largest lender at the time, launched its mello technology platform to power the mortgage and nonmortgage experience for consumers, loan officers, and other referral partners.

– August 2017: Fintech software firm Blend announced it would power the consumer mortgage experience for Wells Fargo and US Bank, America’s largest and sixth largest mortgage lenders at the time, respectively.

It’s easier to see why lender costs have spiked since 2013 when we look at all key dates going back to May 2011. So the fintech efficiency evangelists aren’t wrong. They’re early.

Most lenders are still in the thick of implementing or driving adoption of new technology platforms, which costs more, not less. But eventually fully-adopted smart software will let lenders wring out excess sales and fulfillment costs that ballooned during the KBYO/TRID rush, plus drastically simplify the process for borrowers.

But it’s not a given costs will just drop after that because fintech is also driving another trend: consolidation of services. Amazon began with books then expanded to all retail once they got their tech dialed. Consumer finance firms all begin with something—personal loans, student loans, mortgages, deposits, investments—then expand into other areas.

Either mortgage firms will expand into some of these other areas, or the other providers will take their mortgage business. And “other providers” doesn’t just mean new tech-minded mortgage entrants like Zillow and Credit Karma. It also means big banks powered by smart fintech software and big tech like Amazon looking to expand services.

Mortgage remains the hardest consumer finance service to master at scale, so there’s lots of opportunity for the smartest mortgage firms to expand services. But they must finish getting their tech dialed first.

***Based on 4Q17 retail production according to Inside Mortgage Finance.