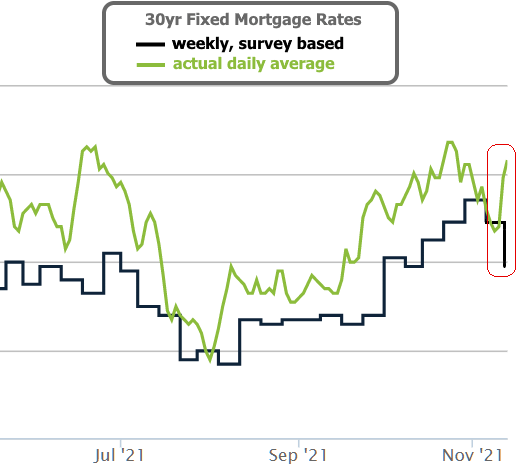 My friend Matt Graham at Mortgage News Daily is out with his close-the-week commentary on rates.

Spoiler alert: rates are up way more than the press is now reporting — they won’t catch up until next week. Matt explains why in his recap. It has to do with 2 things:

(1) Bond markets — which set the tone for rates — reacted sharply to consumer inflation data spiking. Bonds pay a rate of return to investors, and inflation erodes those future returns. So bond investors sell when they think inflation will lower their future income potential. And bond yields (also known as rates!) rise when bond prices fall in a selloff.

(2) The media folks who publish mortgage rate headlines rely on data sources that look backward instead of looking at real-time data. The chart above shows the major mismatch between how rates actually ended the week vs. how rates were reported to end the week.

Matt has more details and more charts at the link below.

Several of the most popular sources for mortgage rates are way off this week. Here's a rundown of what's really going on as this week closes.