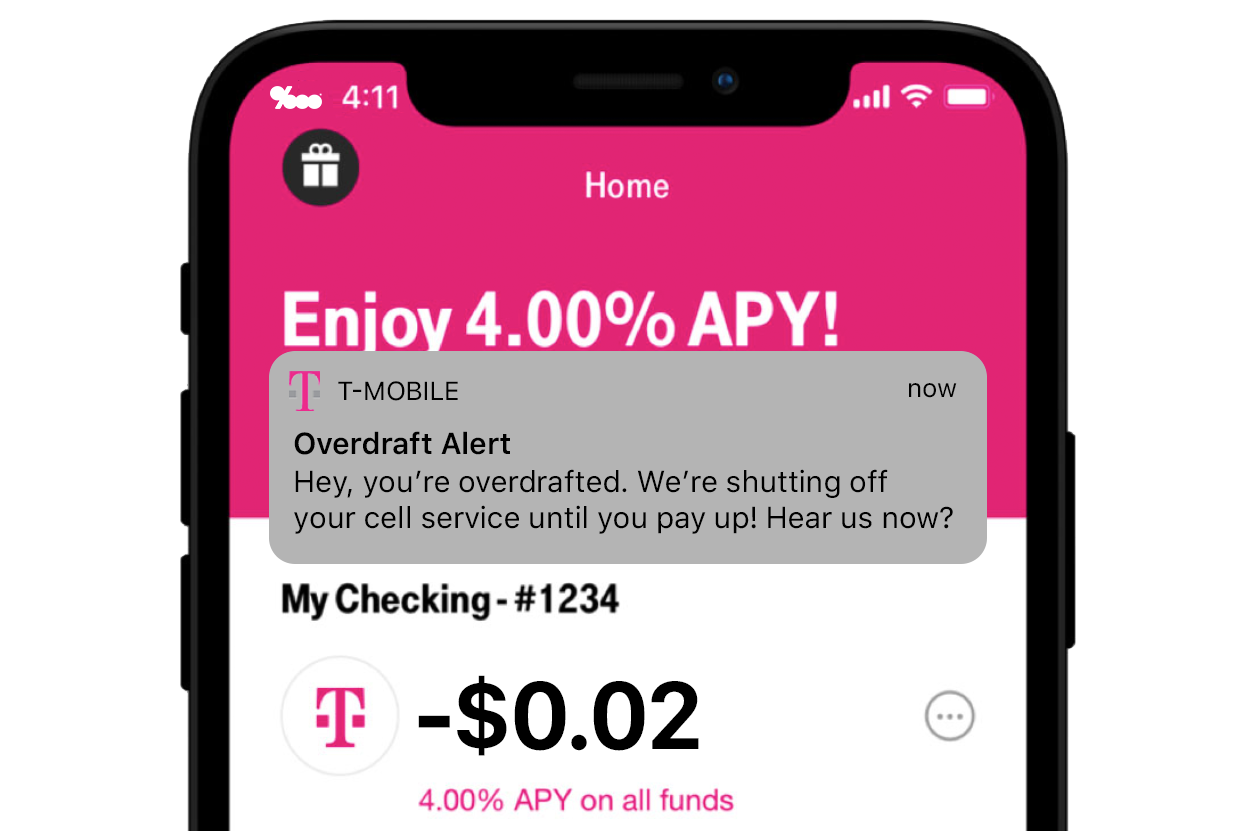 You might have missed the weirdest bit of finance news to come out last week: T-Mobile announced it’s a bank now. Kinda.

The cell carrier just rolled out T-Mobile Money, a checking account with a sweet interest rate of 4% (as long as you have under $3 grand in your account).

The bank/phone company’s press release could have been written by Alexandria Ocasio-Cortez: the first words are “Bye, Big Banks,” and it spends a lot of time focusing on T-Mobile’s overdraft protection.

The dreaded banks charged Americans $34 billion in overdraft fees last year, which I applaud T-Mobile for calling out as BS.

But I’m also rolling my eyes a bit at how T-Mobile pokes at Big Bad Corporations after making $11 billion in revenue last year themselves. And now they’re partnering with Big Bad Banks to get their slice of that sweet banking pie. They’re offering a debit card through MasterCard, and bank services through Customers Bank, a bank with $10 billion in deposits.

It’s just like Apple’s “not a bank” credit card. Yeah, Apple is marketing the product and they’re not a bank, but the product is totally made by mega-bank Goldman Sachs. In T-Mobile’s case, their banking products are made by Mastercard and Customers Bank.

The T-Mobile and Apple announcements show us the future of our banking experience: hip Not-A-Bank companies will be the marketing machine for banks to deliver the same ol’ services to you. But with cooler wrapping!

While T-Mobile’s customer service might be better than Wall Street’s, I’m a little nervous at the thought of having all my eggs in one company’s basket.

T-Mobile’s leaning hard on being overdraft-friendly, but what if their tune changes? The image at the top of this article imagines a dystopian future where your carrier also knows everything about your finances.

Imagine running an overdraft on your Bank of T-Mobile account after losing your job. Good luck making your phone interview for a new gig when your bank-carrier decides to shut off your service because you’re broke.

I joke. But it’s not hard to imagine, either.

Companies love hooking you with a deal and then turning up the heat. Remember when Netflix cost $8 a month? Now it’s twice that.

Also, on the topic of phone companies getting bigger, I seem to remember this was once frowned upon. Hmm. Why do I think that?

Julian and I spoke to a group of MBA students a few weeks ago, and we explained how tech companies like Apple are getting into banking.

I asked the class if they would open an Amazon bank account, and nobody was really into the idea.

One kid summed up a great reason why he wouldn’t bank with Amazon:

Another person asked in less polite words: “Would you sh*t where you eat?”

Now it’s your turn—would you put your money eggs in your T-Mobile basket?

Drop us a line and let us know.

– Credit card “created by Apple, not a bank” – powered by a giant bank (The Basis Point)