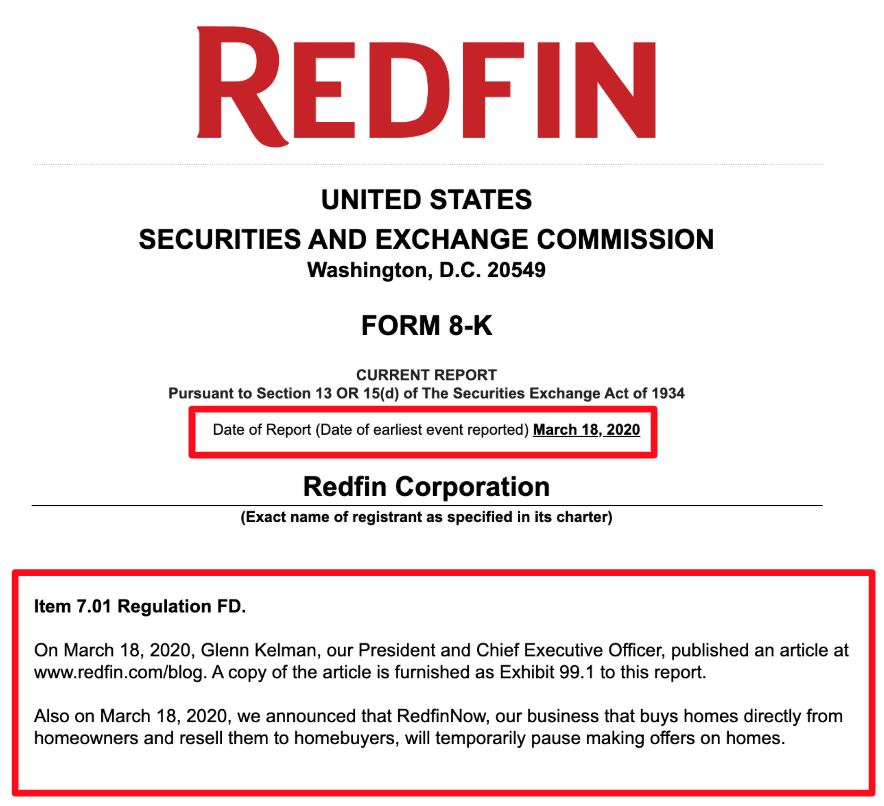 In an SEC 8K filing today, online real estate brokerage Redfin said it is “pausing” its iBuyer business that instantly buys homes from sellers. This comes just 5 days after I advised rushed home sellers to consider an iBuyer offer before bids drop.

We’ve seen now fast stocks — a much more liquid market than residential real estate — have dropped in this coronavirus panic, and this is a big signal of how fast it’s now proliferating into the housing outlook. Below is the 8K statement Redfin made about their RedfinNow iBuyer business, as well as comments they made on the market turning:

On March 18, 2020, Glenn Kelman, our President and Chief Executive Officer, published an article at www.redfin.com/blog. A copy of the article is furnished as Exhibit 99.1 to this report.

Also on March 18, 2020, we announced that RedfinNow, our business that buys homes directly from homeowners and resell them to homebuyers, will temporarily pause making offers on homes.

The Redfin blog post referred to in the 8K filing wasn’t as detailed as the one they put in the 8K. I’ve excerpted the 8K filing version below and I’ve bolded notable sections from Redfin’s real-time market analysis.

They do a good job of explaining just how fast this is evolving.

GROWTH IN HOME BUYING DEMAND: THIRTY TO ZERO IN 2 WEEKS

This week, home-buying demand took a big hit, with year-over-year growth dropping from nearly 27% in January and February to 1% growth over the past seven days. There has in fact been a 1% contraction in demand over the past three days. This decline is unsurprising, now that governments in San Francisco and Philadelphia are telling residents to stay home. Traffic growth to Redfin’s website has also slowed from around 20% through the first two months of 2020 to high single digits over the past week.

MANY OPEN HOUSES CANCELLED, SOME LIKE A DISNEY RIDE

Redfin has canceled open houses nationwide for public safety. One Redfin agent in Hoboken, New Jersey, Noah Goldberg, visited another broker’s open house that was letting small groups into the property, one group at a time. “There were six groups lined up on the sidewalk like a ride at Disney, and this was after the curfew announcement.” As of Tuesday, Noah said, demand was down: “Two weekends ago, coronavirus was something that was happening somewhere else. Now I have about half the activity I once did.”

SOME PARTS OF THE COUNTRY: BUSINESS AS USUAL

But that conclusion isn’t universal. On the same day, Tuesday, the manager of our North Florida business, MaryDell Penney, said that “the [Jacksonville] team says it feels like business as usual. We’ve got closings happening yesterday, today, tomorrow… nobody expressed interest in pulling out.”

Even where buying demand is falling, we believe that low inventory has limited some of the impact. Many agents we spoke to Tuesday morning still report bidding wars on listings. One Washington DC listing agent, Mary Bazargan, debuted three listings last week, two of which are already under contract. She has three listings scheduled to go on the market this week and two scheduled for next week. She said that she is “counseling my sellers that until we see less interest from buyers and touring activity dry up, we should move forward with listings. And we’ll continue to evaluate.”

INDUSTRYWIDE, LISTING ACTIVATIONS UP SLIGHTLY OVER PAST 7 DAYS

Our data indicates that Mary isn’t alone in her confidence. Since listing activations are a public event, we rely on our access to industry-wide MLS data rather than our own customer database. The number of listings activated marketwide over the past seven days increased year over year 0.5%; since most listings debut before, not after a weekend, this trend doesn’t reflect the anxieties that have blossomed in most of America since Friday. What’s genuinely surprising is the increase in listing activations among the hardest-hit cities in the U.S., up 9% year-over-year in the Seattle area for the past seven days, and up 6% in the Bay Area.

ONE FACTOR LIMITING OUR OWN HOMEBUYING DEMAND: NO ADS

One minor headwind on Redfin’s customer growth has likely been our decision to stop buying ads except the custom digital campaigns we create for each listing customer; we aren’t spending money to promote our brokerage, but we’re still spending money to promote our customers’ houses. We stopped buying mass-media advertising on March 9, and stopped buying digital ads to benefit Redfin a week later.

ONE FACTOR CONTRIBUTING TO OUR HOMEBUYING DEMAND: VIDEO CHAT TOURS

A tailwind that’s even smaller but still worth mentioning is that the fraction of our tour requests that are for video-chat tours has increased nearly four-fold over the past two weeks, albeit off a low base. Due to some heroic engineering efforts, we upgraded the website functionality for requesting video-chat tours last night.

SALES ARE STILL PULLING THROUGH

Our industry has been rocked by rumors that courthouse closings would prevent sales from being recorded, but those rumors have all been, so far as we can tell, untrue. Most counties support electronic recordings. And customers who’ve agreed to buy or sell a home are so far sticking with it at about the same rates as last year. In 2008, when real estate was the reason the world was falling apart, all bets were off, and this was the part of our sales pipeline that really fell apart. This time around, it seems that buyers are happy to have found better shelter from the storm.

One bullet that the government fired to help housing this week didn’t hit its mark. Even as the Federal Reserve has lowered the federal funds rate to zero, mortgage rates have increased about 30 basis points, from a low of nearly 3% in early March. Money has only gotten cheaper, but the people originating loans can’t keep up with demand; volume is so high that lenders are taking profits. One lender was quoted earlier this month telling his team to “kiss [their] families goodbye,” because they would be working around the clock refinancing people’s mortgages. Low mortgage rates are probably doing more for people who already own houses than people who want to buy them. This is my main frustration with monetary policy’s impact on housing: for years, it has mostly benefited the existing owner class, rather than expanding that class.

That’s the news from Redfin this week. Our chief growth officer, Adam Wiener, will write any future reports.

– Redfin CEO comments on how coronavirus is hitting housing market