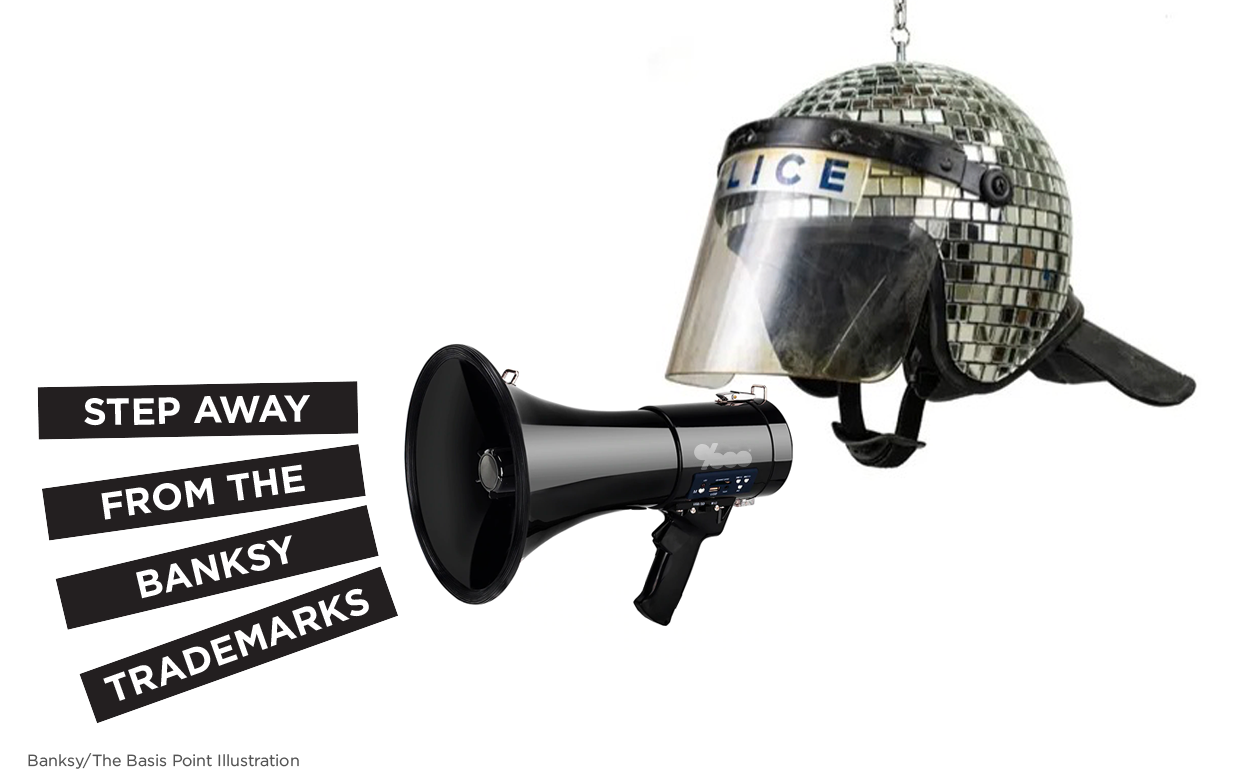 Last year, Banksy made headlines for shredding his Girl With Balloon painting moments after it sold for $1.4 million. This week, his Devolved Parliament painting set a new Banksy record when it sold for $12.2 million. But the real headline right now is a Banksy trademark dispute, and it’s a great lesson on how trademarks work.

Securing a trademark isn’t like buying a domain name or grabbing a social handle and sitting on it until you do something cool with it.

A core tenet of trademark law is openly and actively defending your trademark in the marketplace.

Here’s a statement from Banksy on what happened:

“A greetings card company is contesting the trademark I hold to my art. And attempting to take custody of my name so they can sell their fake Banksy merchandise legally.”

So the dispute comes down to whether he’s defending his trademarks for merchandise.

But Banksy became the world’s most famous street artist by openly and actively creating art for all, not hawking merch.

“Copyright is for losers” is how Banksy once captured this ethos.

Clearly this scenario changed his mind.

The greeting card company is called Full Colour Black, and while their cards are dope, they’re straight up photos of Banksy works.

“We legally photograph public graffiti and make it available to you — the public.”

I have empathy for Full Color Black’s position, but making public stuff available by sharing it is different than making it available by selling it.

So I respect Banksy openly defending trademarks to draw a line in the sand against exploitation of his art-for-all ethos. If he finds a way to make money off his work that started publicly, that’s his right. But it’s not quite the right of others.

And Banksy was true to form mounting an open and active trademark defense.

He set up a store in the south London town of Croydon.

It’s called Gross Domestic ProductTM and the tagline is Where Art Irritates Life.

I especially love the TM on the name.

Here’s the storefront and the explanation of the store. 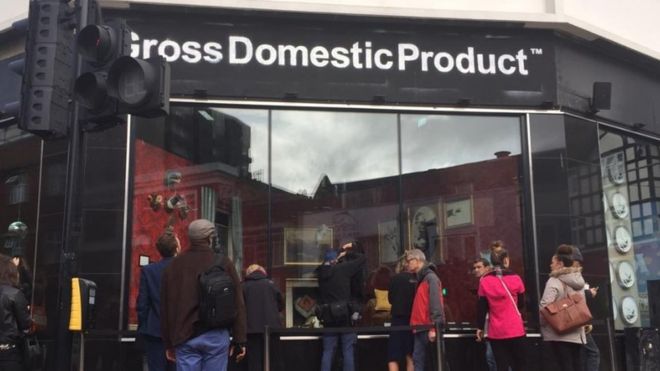 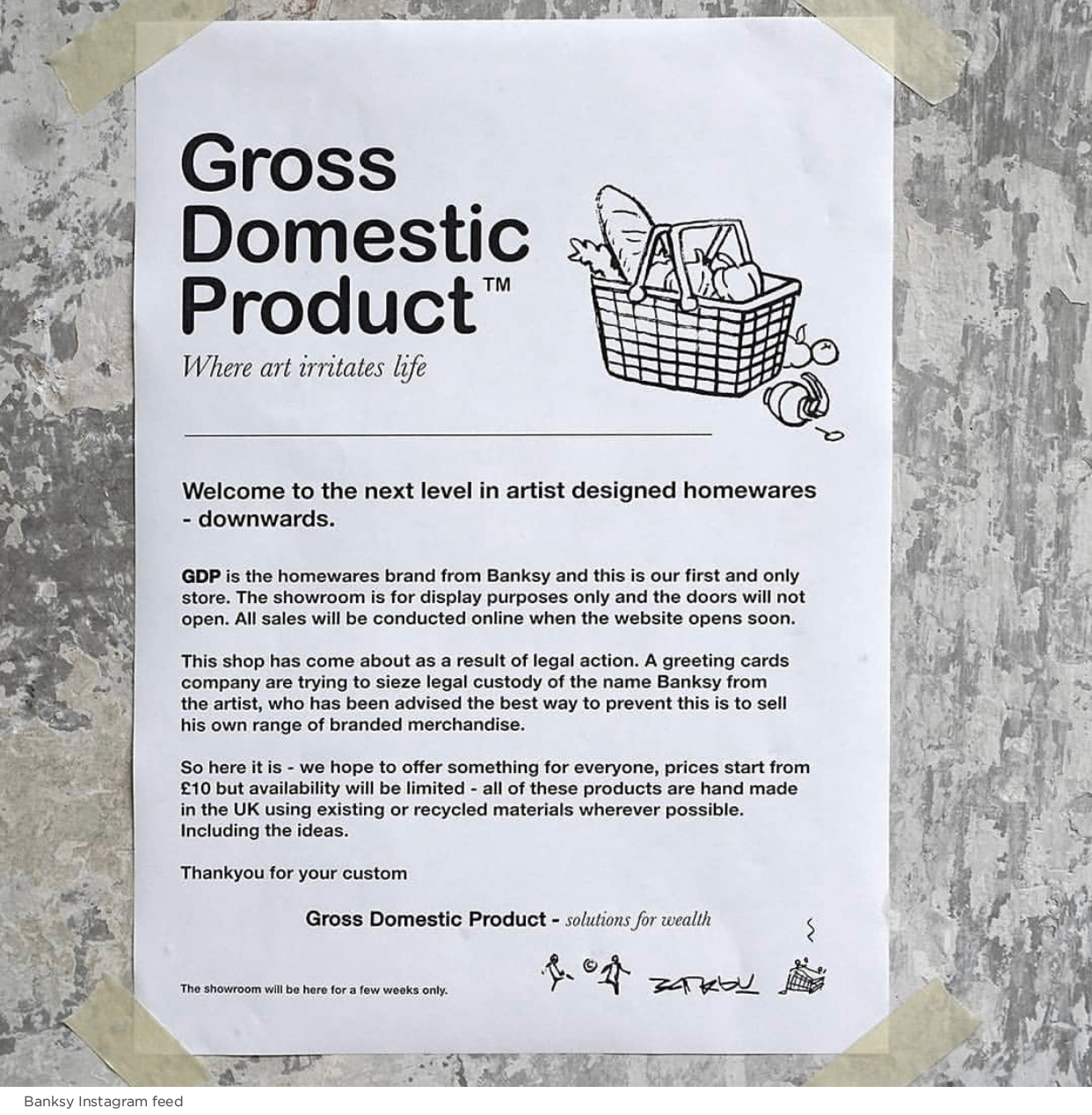 I also love how the store won’t actually sell anything. The “impractical and offensive” merchandise list is awesome, and includes:

But the items will only be available online.

This approach doesn’t just check the legal box of openly and actively defending trademarks in the marketplace.

The publicity frenzy of this approach elevates open market trademark defense to a whole new level while flipping the bird to those profiting from his work instead of just sharing it.

Mission accomplished so far, and while Full Colour Black’s case has relevant nuance, I’m pulling for Banksy trademarks to win the day.

That doesn’t sound quite right at first.

Banksy’s art shredding stunt last year forced us to think deeply about the relationship between art and commerce (spoiler alert: the shredded piece is worth more).

And he didn’t pocket $12.2 million from Devolved Parliament’s sale because he didn’t own it anymore.

So this trademark dispute just the latest chapter in the art vs. commerce saga.

More as Banksy and Full Colour Black play it out openly and actively.

Would love to hear your thoughts. Hit me up.