It’s been 10 years since subprime mortgages toppled the world, and there are signals that the cycle is beginning anew.

But before we get into that, let’s get some perspective using a critical quote from Nouriel Roubini, an early predictor of the crisis. He’d been beating the drum on weak credit discipline at least a year before things fell apart, and his quote from a few weeks before the darkest days of the financial crisis in September 2008 says it all:

“We have a subprime financial system, not a subprime mortgage market.”

Then the wheels came off: Fannie and Freddie overtaken by Treasury, Lehman failed, Merrill overtaken by BofA, WAMU overtaken by Chase, Wachovia overtaken by Wells, AIG bailed out, Fed allowed Goldman Sachs and Morgan Stanley to convert from investment to commercial banks.

This quote is critical is because it helps delineate subprime’s original intent from what it became.

Subprime’s intent is to fill an important lending niche serving borrowers that might not otherwise be served. Niche is the operative word because most subprime risk should reside with lenders and not the “system” of Fannie, Freddie, FHA, the Fed, the FDIC, and therefore taxpayers.

In the years that led to the crisis, everyone except a few Roubini types incorrectly thought subprime was just a niche, but ten years ago when a subprime shop disguised as America’s tenth largest lender failed spectacularly, we all learned what Roubini already knew: most lenders had become subprime in the quest for more loans, and because lenders paid ratings agencies to rate their loan pools, subprime loan pools were rated as A-paper and pumped into the global financial system. Hence the “subprime financial system.”

Now questions are being asked, like: Are 3% down programs like this one from Fannie the “new subprime”?

These are no doubt risky, but they don’t look like subprime that sunk the system. Those loans were mostly made with little to no documentation, any property type was eligible, there was no mortgage insurance, and the prevailing structure was ARMs that adjusted sharply in 2-3 years, or ARMs that allowed you to pay less than the interest due so your loan balance actually grew.

Conversely, these Fannie low-down loans are made with full income and asset documentation, mortgage insurance, first time buyers only, fixed rate loans only, and primary residences only.

I could be proven wrong later like the entire world was ten years ago, but even if home prices tanked again, I don’t believe the uptake of these loans has been large enough to cause a collapse. Borrowers wouldn’t be facing adjusting payments we saw back then, and their ability to repay has been verified, so if they were able to keep making payments, they could hang on even if they went underwater.

In other words, I don’t believe these loan programs are systemic at this point. They could become so later if those loan guidelines start to slip, and that’s what we all need to watch.

Meanwhile, niche subprime guidelines and especially messaging from private lenders are already loose. This “Non-Prime” lender ad below is from a mortgage trade mag targeting loan officers. Even if these programs actually help underserved borrowers, the message is reminiscent of a careless era.

And below is a another mortgage trade mag headline that jumped out at me. Again, the subprime message is starting to sound careless. As a marketer and a sales exec, I’ll be the first to say the whole goal of marketing is to make your names and labels become systemic. But the message must clearly define the product, not obfuscate it. I don’t like seeing this grey language creep into the subprime space again. 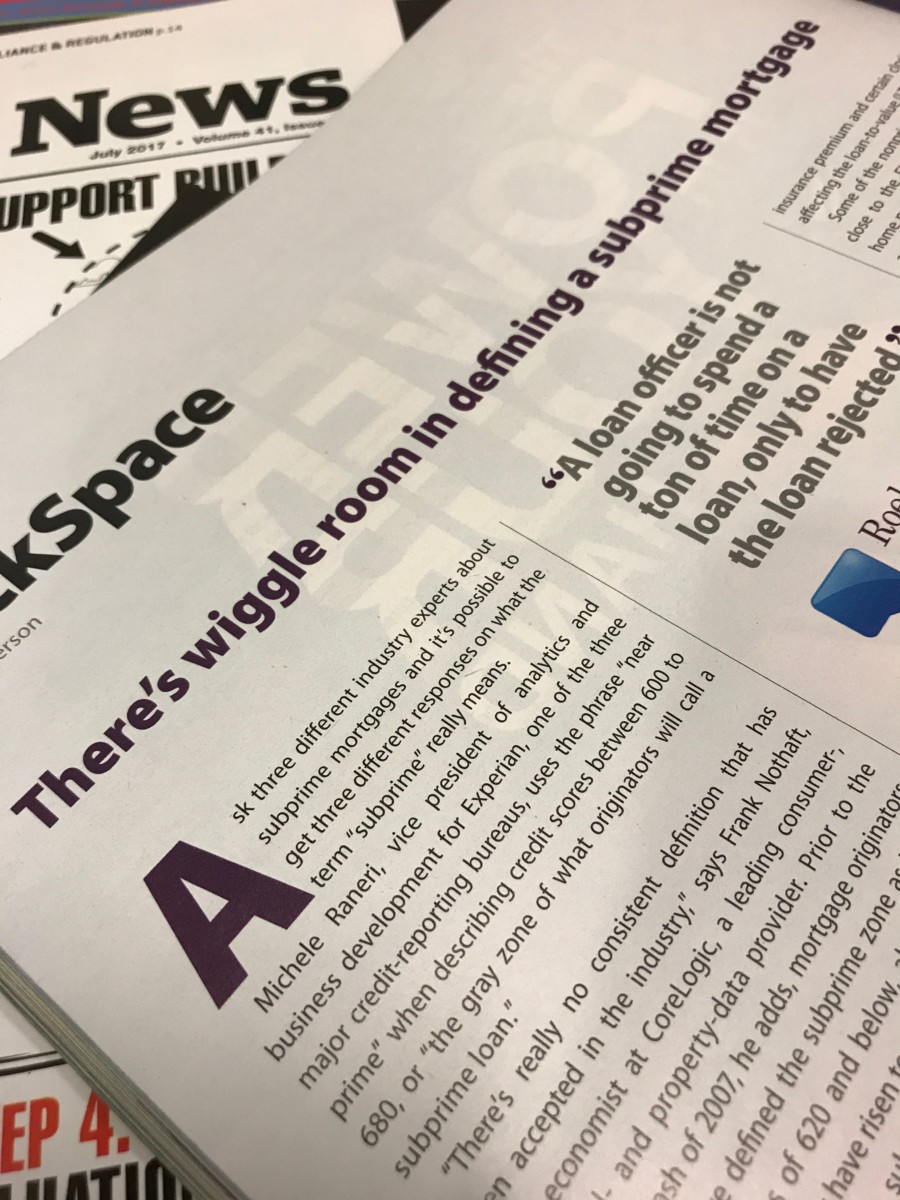 That “subprime shop disguised as America’s tenth largest lender” I noted above became the poster child for Alt-A loans, and Alt-A became systemic subprime. And ten years later we now have “New Spin on Alt-A.”

That’s scary. And some might also say “Non-Prime” and especially “Outside Dodd Frank” is even scarier. But it’s actually not. At least those two labels tell it like it is.

“Non-Prime” is very clear and “Outside Dodd Frank” is even more clear. Dodd Frank was the post-crisis body of laws that created the lending industry’s top cop, the Consumer Financial Protection Bureau, and made NINJA loans and risky ARMs noted above illegal.

So if you’re calling your product “Outside Dodd Frank,” consumers and regulators know exactly what it is. It sounds jarring, but better to be jarred by overt subprime marketing now than leveled by a stealth subprime financial system later.

As you can see, there is indeed wiggle room in defining a subprime mortgage. We should be watching these definitions and marketing labels very closely.