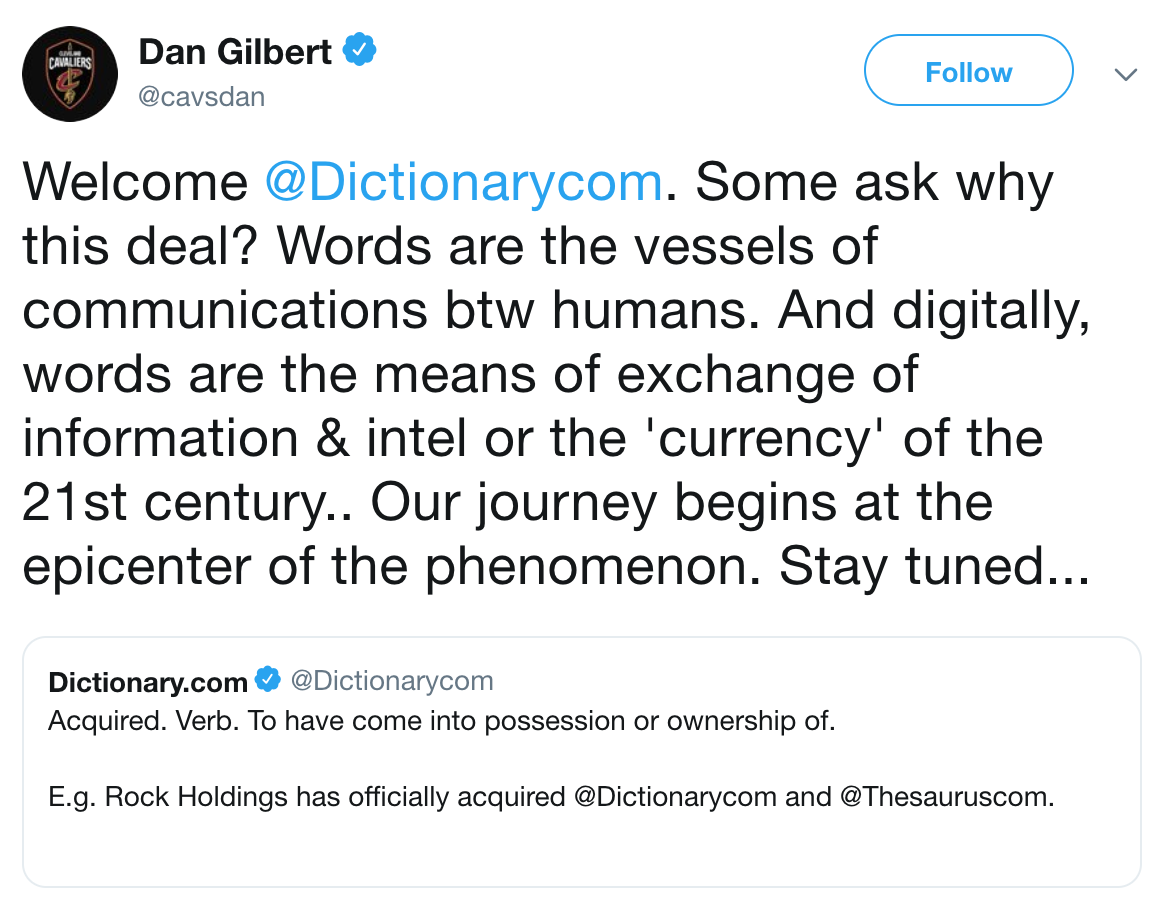 All press releases suck. They’re an archaic but necessary mechanism that are horrible to read and write. But every once in awhile there’s a gem. Last week Dan Gilbert’s company Rock Holdings — parent of Quicken Loans, Cleveland Caveliers, StockX, Genius, and over 100 other companies — bought Dictionary.com and Thesaurus.com from IAC, and they treated the press release thusly:

DETROIT, November 15, 2018 – Detroit-based Rock Holdings, Inc., progenitor to considerable FinTech and other online enterprises, inclusive of Quicken Loans – the nation’s largest mortgage lender – today disclosed the acquisition of Oakland, California-based Dictionary.com and Thesaurus.com in accord with their begetter, IAC. These forums are the nation’s preeminent online erudition resource and information concourses, eliciting in excess of 540 million page explorations per approximate lunar cycle.

“From the genesis, we admit to invariable conjecture in the unmitigated competency of online mechanization to ameliorate the total sum of completed undertakings throughout our mortal existence. Cognition and discourse are conjointly associated,” said Dan Gilbert, Founder and Chairman of Rock Holdings. “Whilst the cosmos that encompass us are invariably in flux, an aphorism has perpetually prevailed – the desideratum for efficacious articulation to connote doctrine, conjecture, et al. Comparatively we persevere, maneuvering a terrain glutted with permutation, crystal clear communication will always be the key to success. In addition, over the past two decades, these ‘raw materials’ of language are in essence not only the ‘vessels’ of all communication but at the same time they are also becoming the currency of the digital age.”

Established in 1995, Dictionary.com and Thesaurus.com hold notorious for engendering consequential network exchange and assignation as the globe’s copious digital-forward English lexicon and onomasticon, pro rata. Their technological infrastructure has been pivotal in accommodating an agglomeration of recrudescing global patrons with incorrupt entrée to a multiplicity of delineations, equivalencies, phonic syllabifications, precedent sentences, transliterations and the facilitation of orthographic study. Likewise, the gamut burgeons clear of cyberspace, exceeding 110 million digital utility downloads from antiquity to the present day for consumers to promote the analysis of words originating at the interior of the individual’s own metacarpus.

The annexations of Dictionary.com and Thesaurus.com append a prodigious coterie of inestimable content proprietaries to Rock Holdings and its affiliated companies such as Rocket Mortgage, ForSaleByOwner.com, LowerMyBills, StockX, Cleveland Cavaliers, Robb Report, and Genius, among others.

“This is an exhilarating juncture for Dictionary.com and Thesaurus.com. We endeavor to excogitate amidst a portion of the eminent monikers in industrial science,” said Liz McMillan, CEO of Dictionary.com. “Rock Holdings is the epicenter of a plethora of headmost enterprises in the commonwealth of cyberspace and we apperceive that considerable capability for additional ontogenesis is situated within the aforementioned alliance. Additionally, this is a prodigious and advantageous ethology that will accouter our platforms amidst the mechanisms to endure about the preeminent perimeter of perspicacity and the junction of consumer praxes.”

As a consortium that emulates a For-More-Than-Profit ontology, Rock Holdings and affiliates are fixated on expenditures in steadfast quarterage, scholarship and vocation in its hometown municipalities of Detroit, Cleveland, Phoenix and Charlotte.

The new titleholder of these enterprises, foresees an explosion of innovative and creative functionality, products and integration opportunities that will propel this enterprise into leading a viral era of knowledge expansion and communication skill development across the nation from preschool well into senescence.

Dictionary.com and Thesaurus.com retain upwards of 50 contingent partners situated in Oakland, California – with approximately 75% concentrated on product and engineering.

The stipulations of the procurement remain unavailable.

Brilliant stuff from brilliant creative teams at Rock Holdings and Dictionary.com. As for the stipulations of the procurement, Ben Lane over at HousingWire estimates Rock Holdings paid $100m based on IAC telling investors they would sell Dictionary.com and TV production firm Electus for $130m, and Deadline’s Nellie Andreeva reporting Electus was acquired for $30m.