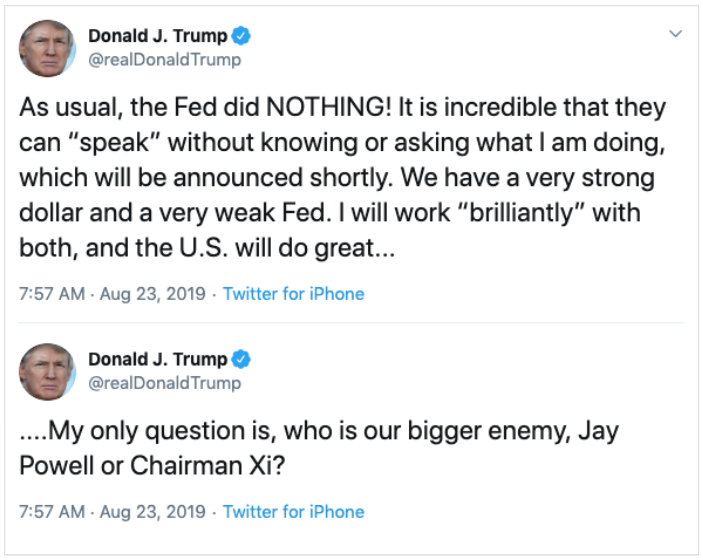 All politicians truncate economic details, but twitter president Trump ignores the actual economy. On Friday Fed chief Jay Powell gave a detailed speech about how the Fed is helping the economy. And how they’re trying to keep America’s longest-ever economic expansion going.

Yet Trump just dismissed Powell — the Fed chief he picked — as enemy of the people.

I get this soundbite game politicians play, and Trump plays better than everyone. But when it comes to how the economy plays next year, we need more than twitter details.

I also get that economic stuff can be super boring. So below I interpret Powell’s giant speech to explain what the Fed does and how they’re trying to help us.

Can this economy keep going strong? Let’s take a look.

– The current U.S. expansion has entered its 11th year and is now the longest on record. The unemployment rate (now 3.7%) has fallen throughout the expansion and has been near half-century lows since early 2018.

– But that rate alone doesn’t fully capture the benefits of this strong job market. Labor force participation by people in their prime working years has been rising.

– For the past few years, wages have been increasing the most for people at the lower end of the wage scale.

– People who live and work in low- and middle-income communities tell the Fed that this job market is the best anyone can recall.

– Inflation has been surprisingly stable during the expansion. It’s a bit lower now, suggesting some economic weakness, but last year it help near the neutral 2% range.

– So we remain in the sweet spot: best possible employment situation and stable prices of goods and services.

– This is the Fed’s “dual mandate” – to make sure most of us have jobs and stuff is affordable enough for us to buy.

– Powell said economic boom and bust cycles were especially strong in the 1950s and 1960s. There were three in a row where we’d go back and forth between having a recession, then the economy would grow more than 6%!

– By the mid 1960s, Powell said this “stop and go” economy “had too much go and not enough stop.” This led to severe inflation by the 1970s, which means prices on everything got out of control for people. You can see the inflation spike on this chart. 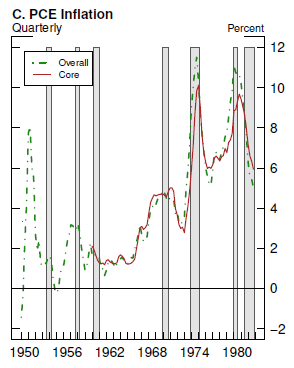 – During that era, a former Fed chair named Paul Volcker modernized Fed policy to fight inflation. It caused two back to back recessions, but eventually worked to make stuff affordable again.

– It also set a precedent for the Fed to help the economy by keeping stuff as stably affordable as possible. The fancy phrase for this is “anchoring inflation expectations.”

– It also helped stabilize employment. From 1983 to 2009, the U.S. had two of the three longest expansions it ever had to that point.

– Prior to the 1990 and 2001 recessions, the Fed started cutting rates, and the ensuing recessions were mild by historical standards.

– The Fed also lowered rates to chill out markets during a 1995 slowdown and a 1998 Russian default panic caused by Long Term Capital Management hedge fund bravado. 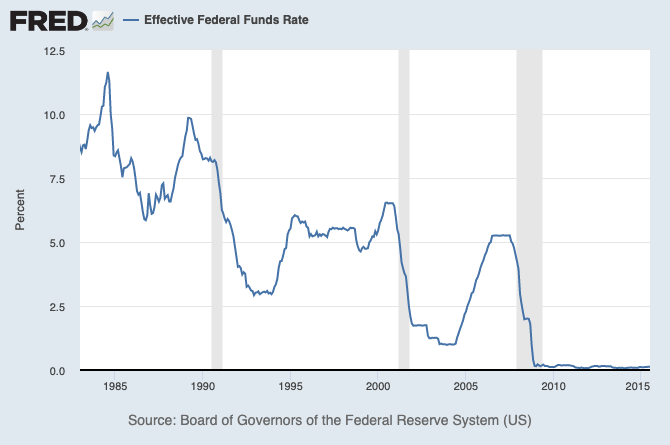 – The Fed calls such bravado “financial excesses” so a new debate started. Do these Fed-assisted long periods of good times and low inflation lead to more financial excess?

– For the early 2000’s, the answer was definitely yes. Lending standards and broader financial market regs were crap at best. And it led to a housing and financial derivatives boom that blew up spectacularly.

– But since, a massive re-regulatory wave has helped moderate excesses.

– Now the Fed is trying to solve for keeping this mass employment going without prices rising in a world where rates are also super low.

– Their job is to use rates and related tools to do 2 things. Gently slow things when economic growth looks too fast so prices don’t rise for everyone. And gently assist when things slow down so people don’t start losing jobs.

– Meanwhile Trump is pedal to the metal all the time. Cut rates! Stimulate the economy even when unemployment is 3.7% and wages are growing!

– And also let’s do a trade war, because … America First!

– Powell was clear (and correct) Friday that trade policy is the business of Congress and the Administration, not the Fed.

– Yes trade policy could impact employment and inflation, which then leads back to the Fed’s stability toolkit. And I’m confident the Fed will save the day if trade war bravado led to more systemic problems over time.

– But the economy isn’t a realtime twitter reaction. And the Fed shouldn’t act to calm short-term chaos caused by trade sabers rattling.

– Powell said this Friday, albeit in a bookish rather than twitter-ish way.

– Then he said the Fed’s recent rate hike stance since 2016 was to gently keep inflation in check as the economy does well.

– And most important, he also said global growth is slowing and trade policy chaos seems to be playing a role in this.

– He ran down all the U.S. and global factors the Fed is watching to see if they need to cut more or hold.

– His speech was a way of telling Trump to buzz off, and let the Fed do it’s job of keeping things stable.

– I love the twitter era just as much as anyone else. And I get the Fed isn’t a panacea for economic stability.

– But I’m glad the Fed is holding the line against short-termism, and I believe they’re trying harder to help the economy than the president at this time.

– Trump twitter reaction to what Fed is doing to help economy