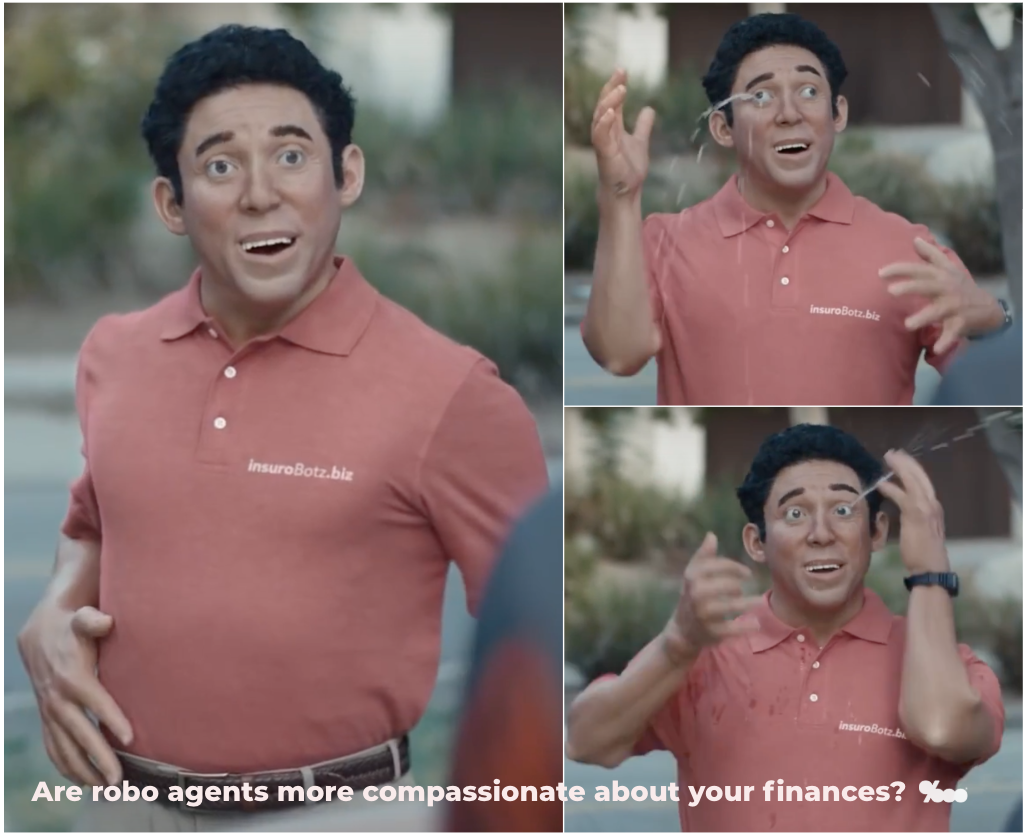 In 2019, you’ll see a lot from us on easy tech vs. smart human advice in consumer financial services. It’s the hottest topic going as the financial technology—aka fintech—era matures. You’ll also see different takes on the same subject as we debate and dissect these issues with clients and among our team.

That said, I’ve got a couple notes to add to Spencer’s take on tech vs. human touch in insurance.

All week we’ve been talking about this State Farm ad mocking the rise of tech-powered insurance firms like Lemonade and Esurance using a creepy robot “insurance agent.” Two things:

1. This is ad of the year for human touch in financial services. At this level, advertising is mostly about entertaining people and hammering them with one message. This is A-list entertainment and the creepy, glitchy robot most definitely hammers how stupid robots are compared to humans. “The budget insurance companies are building these cheap knock-off robots to compete with us,” explains comedian Oscar Nunez to NBA stars Chris Paul and James Harden. Then the robot claims to have compassion for the customer and spews fake tears in all directions.

This is in stark contrast to the latest openly superficial ad from Esurance, in which Dennis Quaid sarcastically drives a “surprisingly painless” message, which is of course because of technology, not human advice. Like State Farm mocks automation, Esurance basically mocks compassion. Both are effective, but State Farm wins this round.

2. This doesn’t mean a giant like State Farm lacks innovation. State Farm has online service and traditional insurance agents, and at this advertising level the mentality is: spend hundreds of millions to build brand awareness and when the customers come in, they can go down a less personal tech-driven path or they can work with a traditional agent.

A case study here is Quicken Loans’ Rocket Mortgage adversing. Everyone now knows Rocket Mortgage because of the ubiquitous advertising—and everyone loves rockets—but only a fraction of the loans that come into Quicken are actually Rocket Loans. The thinking goes: bring everyone into the funnel with a message everyone loves even if everyone doesn’t happen to take the same path down the funnel. In the end, they still unseated Wells Fargo as America’s largest lender last year.

All financial services are a hybrid of technology and human advice in the end. The rest is just sales, brand, and advertising hitting us with the messages we want to hear.

And people of different ages and different phases of life want to hear different things. Which brings us back to Spencer’s piece (which also has more links on this topic).

-Here are State Farm and Esurance ads in full