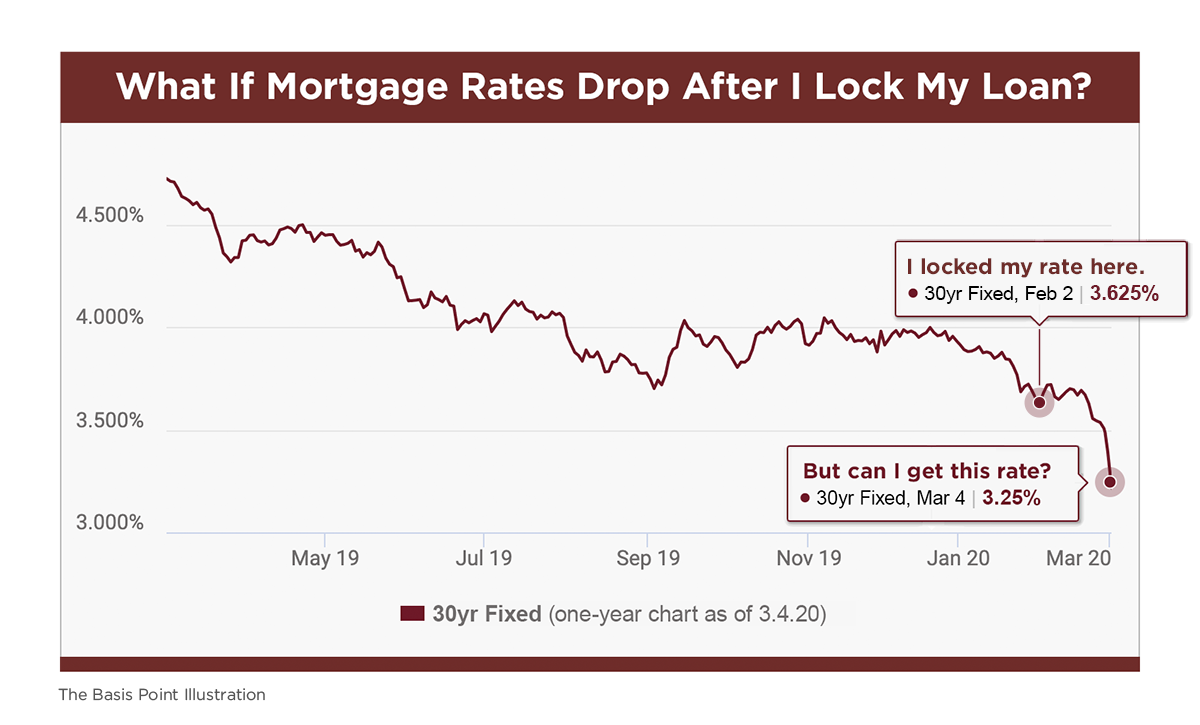 This week rates dropped to all time record lows around 3% for 30-year fixed loans and below 3% for 15-year fixed loans. It’s a refinance frenzy for homeowners and a super lucky break for homebuyers as spring buying season begins. But what if mortgage rates drop more after you lock your rate? Let’s answer this and a few other mortgage questions everyone’s asking right now.

WHY HAVE 2020 MORTGAGE RATES DROPPED SO MUCH?

Mortgage rates are tied to bonds backed by U.S. mortgages and investors consider these bonds safer than stocks when something like coronavirus causes economic uncertainty.

Rates drop when investors buy bonds at times like this, and this is why we have record low mortgage rates.

Coronavirus will slow the global economy significantly in 2020, but before we get to geeky numbers, these two examples paint the picture:

(1) China is known for its furious 24/7 manufacturing and commensurate pollution. The NASA images below show how radically Chinese manufacturing has slowed as a result of coronavirus. 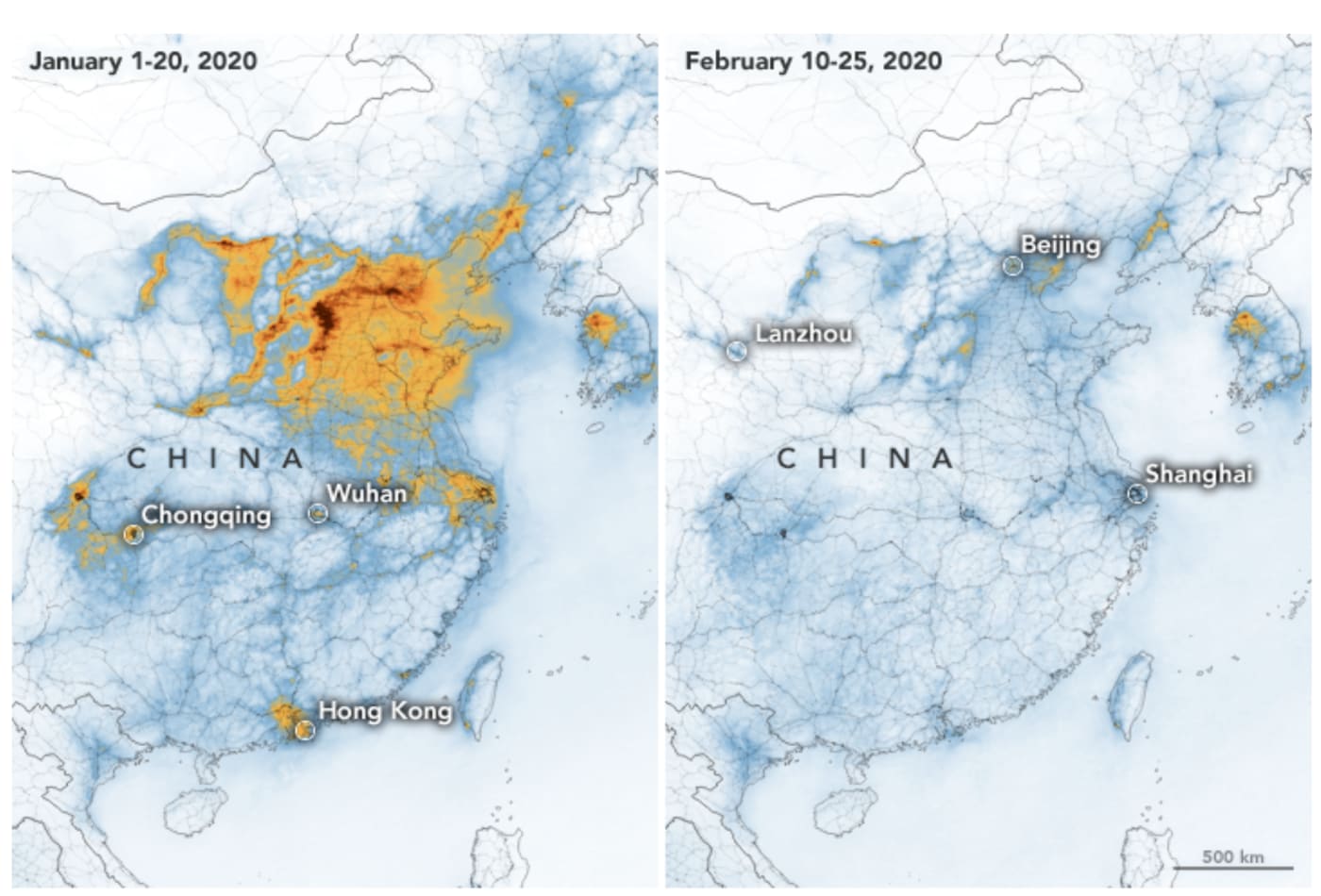 (2) The final James Bond movie with Daniel Craig, No Time To Die, is a giant movie to say the least. It was set to come out in April and was just postponed to November because expected movie theater attendance is expected to drop significantly. We can also expect the rest of Hollywood will follow suit as people don’t know how long to tread lightly in public places. 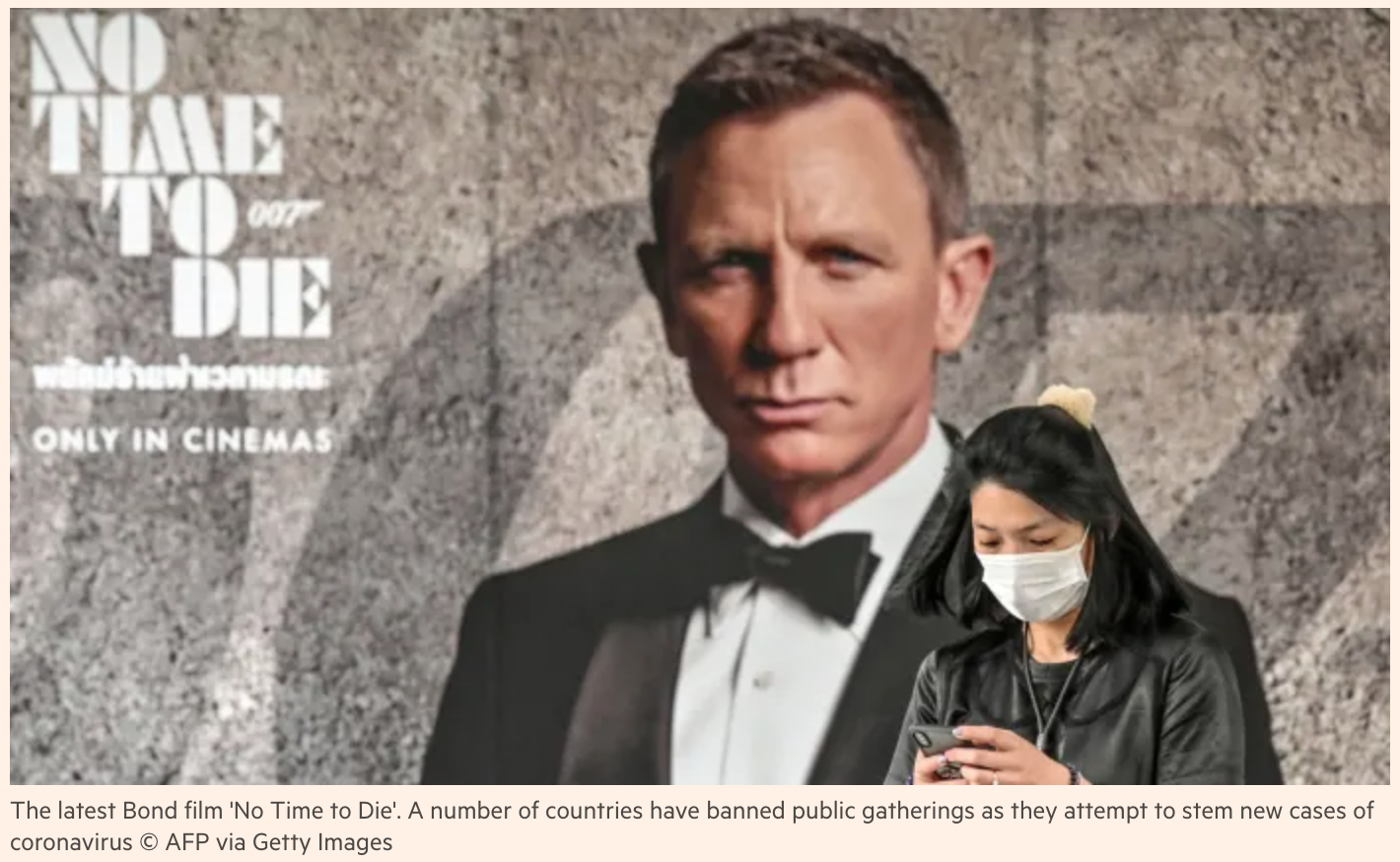 As for the numbers, Goldman Sachs predicts U.S. economic growth (measured by GDP) will shrink by about 1 full percentage point from Q4 2019 to Q4 2020. They break down their 2020 GDP estimates as follows:

To put some numbers to those less-pollution-means-less-manufacturing pictures above, Goldmans’s economics team said China’s NBS manufacturing PMI plunged to 35.7 in February (from 50 in January), the weakest reading on record.

Also, January’s non-manufacturing PMI (comprised of the service and construction sectors at roughly 80%/20% weightings, based on our estimates) was the lowest reading on record at 29.6.

This may recover a bit in March since these drops were from January and February shutdowns by the government, but the drops are from the coronavirus impact, and it’s something market pros are watching closely.

WHAT IF MORTGAGE RATES DROP AFTER I LOCK MY LOAN?

This chart explains exactly what happened to people who locked rates last month when rates started dipping on coronavirus fears.

You locked a rate, and you’re still in the process of doing that loan, but now rates are way lower.

So what do you do?

Most lenders can lower your locked rate a bit, which is called a floatdown, rolldown, or renegotiation.

Most loan officers are bad at explaining this, so listen for these 3 phrases as a signal.

It means they’ll do their best to accommodate you.

There’s a lot of lender math behind a floatdown, but the bottom line is you’ll get about half the market improvement since you locked.

Then you’ll decide to take it or go with a new lender who will lock you with today’s rate.

That decision depends whether you’ve already paid for an appraisal or if your lender charged a rate lock fee.

Rate lock fees are rare, but the appraisal thing is real. If you locked in the past few weeks, it’s likely you already paid for an appraisal.

And most lenders won’t take another lender’s appraisal, so you’ll pay for a new appraisal if you go with a new lender to get a lower rate.

Talk all this through with your existing lender.

They’ll do the math for you and find a solution that serves your goals.

SHOULD I HOLD FOR A LOWER MORTGAGE RATE LOCK?

Everyone becomes a trader when rates drop. Here are two common consumer refrains during this rate drop:

– I’ll just hold for better, this corona thing is going to get worse.

– The rate market will improve because markets won’t like [the presidential candidate you’re voting against].

Word to the wise: rate markets are run by the most sophisticated investors in the world. And even they don’t know how markets play out when it gets volatile like this.

The 10-year Treasury Note provides a decent signal for where mortgage rates might go.

The 10-year Note just dropped just below 1% for the first time, and Wall Street estimates say it’ll drop another 0.25%, then maybe settle around 0.85%.

This wouldn’t cause rates to drop much further than today’s levels. And waiting to see carries way more upside rate risk right now.

If you really want to be a trader because you think rates will drop, here’s your play:

Ask your lender to do a no-cost refi.

Your rate will be about .125% to .25% higher than a normal-cost loan (depending on your loan amount), but trading a higher rate for no closing costs means you’re free to refi again if rates drop more later.

Again, talk through this with your lender and they’ll do the math you need to make the right decision.

– More on deciding when to lock rates (with monthly payment examples)

– Reach out to me directly if you have any questions…