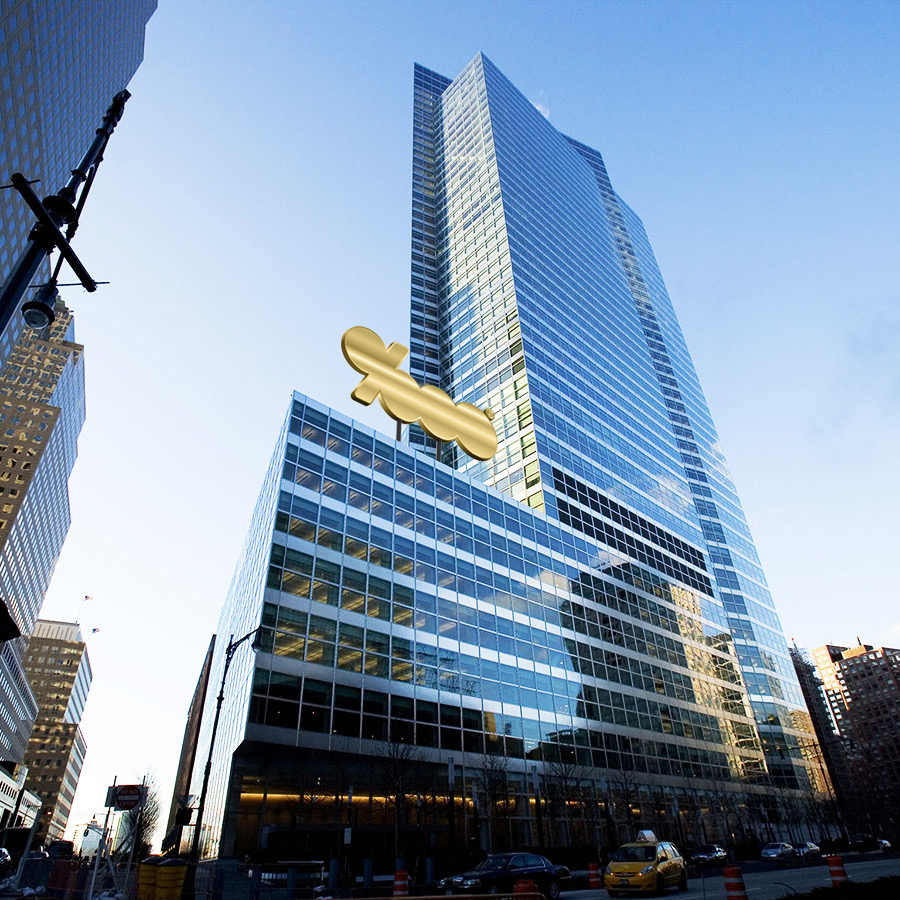 Goldman Sachs—one of the world’s largest banks—gathers its super rich and connected clients and investment partners every year to discuss the state of consumer finance. It’s ground zero for us to teach you how Big Money People think about personal finance, housing, the economic outlook, and also preview hot new finance and real estate companies Goldman and other major global investors are betting on.

Here are the 15 things you need to know from Goldman’s private Housing and Consumer Finance Conference. As you can see from the image above, Goldman made The Basis Point team feel very welcome at its NYC headquarters 😉

1. People at the top think the U.S. economy will keep growing: There was lots of ‘late-2019 recession’ predictions in late 2018 as stocks dropped and the government shut down. Jan Hatzius, Goldman’s chief economist, thinks these factors will create weaker 1Q2019 GDP growth (when this figure is released April 26) but then GDP growth will recover to a 2% to 2.5% range as 2019 moves on. This means recession calls were premature, and this healthy economic cycle may be with us until 2020.

2. More evidence of a home buyer’s market emerging: Marty Young, a senior Goldman housing guy, said national home prices should rise moderately by about 3% in 2019, and mortgage rates will likely end the year around 4.8% which is slightly higher than mid-4% range today. Potential sellers tend to get more serious after a long period of home appreciation starts to chill out.

3. Housing probably won’t cause the next crash—we hope: The Goldman economics team doesn’t see housing as a systemic risk like it was in the pre-crisis cycle. We may see loan guidelines loosen, but post-crisis regs prevent loan guidelines to deteriorate to anything even resembling the no-docuementation loans that led to the crisis. And Young said super-expensive housing markets like the Bay Area are already showing signs of moderating. But it’s also worth noting San Francisco specifically may have a home price spike as upcoming tech unicorn IPOs mint droves of new millionaires. But San Francisco is one niche market in a very large country that’s much more moderate, and the whole country is what impacts the economic projections.

4. And households aren’t as weak as they were coming into 2008, either: Hatzius said the last two U.S. recessions occurred after the private sector started to run at a deficit—meaning when households and businesses spent more than their total incomes. Right now, there’s a healthy distance between spending and total incomes. Private sector deficits make companies stop investing in the economy, which throws a wrench in the works. But since corporate earnings have been so good, big corporations have less debt, which means they’d be less likely to blow up completely in case of a crash.

5. The media is following the wrong auto loan story: While everyone freaked out about record numbers of people falling behind on their car loans, Goldman thinks the delinquencies themselves are not a macro risk. Auto loan delinquencies just show that lenders are deciding to give money to people who can’t afford to pay back their loans as well, Young said. That’s the thing to keep your eye on.

“If people have equity, they won’t default on their loans,” he said.

8. One-stop shop is the name of the game in consumer finance. The CEO of Sallie Mae, a huge student loan lender and servicer, said the company understands it’s in a unique position to capture borrowers at the beginning of their financial lives. Its priorities are what it sees as college grads’ credit needs in the first 5 years after graduation: auto loans, credit cards, mortgages and credit cards. Even if it doesn’t want to offer the product itself, it can refer borrowers’ business to a partner—and that’s what it does with credit cards. More companies are embracing a one-stop-shop model.

9. Your loan servicer will get hip and digital: Scratch is a digital-focused loan servicer that’s trying to make paying your loans suck less. Imagine dealing with your servicer via a phone app or chat instead of snail mail and awful customer service calls. Paying loans will still never be fun, but it might at least get easier.

10. Watch out for Square: Square Capital is Square’s lending arm. Yup, the company that lets you pay with cards at the local hip coffee shop is now a lender. It provides loans to its small business customers, and it has a huge edge because it sees all of their financials because they run their customers’ payments. That lets them be flexible with repayment schedules since they can demand money when they know customers have it and lay off when they know they don’t. On the flip side, they can also push loan products right to their business customers on the Square POS and approve them quickly because again, they have all the financial data. The business is still small—it did $1.6 billion in loans last year, but that was a 34% increase from the year before. We’ve already focused on how owning the customers is the new model for lending businesses, and Square is owning that play in the small business lending space.

11. Home equity is a huge market that’s drawing new competitors for lenders:If you know Prosper, you know it as a marketplace for personal loans. But soon you’ll know it as a lender in its own right. The company’s CFO Usama Ashraf announced that the company just started offering home equity loans. The feature isn’t live on the Prosper site just yet, but we’ll have more news on this soon. For you homeowners with equity and good credit, your lender might start offering you HELOC products. Lucky for you, it’s getting simpler than ever to access home equity.

12. Thanks to Gen Z, owning a car will go out of style: Buying a car is easy compared to buying a house, but it’s still a hassle. But what if you could “push button, get car?” Fair is a company doing just that. The company buys and owns cars, but has a mobile app that’s a marketplace for those cars. You click on the one you want, the company asks you a few questions to approve you for financing, and then the car is yours for as long as you want to pay for it. It’s cars on demand, cars as a service, whatever you want to call it. The CEO, Scott Painter, said his 16 year old kid got his first car through the app, and his kid was still super proud of his first car even though he didn’t “own” it. Gen Z is used to using things without owning them—they stream music, not buy it. When Painter’s son goes to college in 2 years, he won’t have to sell his car or pay for it while not using it like if he owned it. He can just turn it in to Fair. Fair still has to work out its business model, but it has a boatload of SoftBank money, so it has time to figure it out. If it does, and captures Gen Z carbuyers in the process, this could be the future of how we use cars.

13. You still have to win consumer trust even if you have the best technology: Vishal Garg, CEO of online lender Better Mortgage, said that his company has the best rates on all of its mortgage products in all U.S. markets, but 80% of buyers go somewhere else as of today because they trust their realtor or local lender more. He says the challenge for Better Mortgage is to own customer trust like Amazon does. You’ll buy any product on Amazon because you know it will come to your house. Garg says his vision is to become the Amazon Prime of mortgage. The challenge Better has is a lesson to mortgage disruptors: just because you’re a tech wizard doesn’t mean customers will believe that you are. You have to devote resources to winning trust. This can take years, but there are companies out there like Better who are building this base now.

14. An always-approved digital loan experience is closer than we think: Tim Mayopolous, president of mortgage tech firm Blend and former CEO of Fannie Mae, said the mortgage industry really only started to take technology seriously in 2016 when Quicken Loans launched Rocket Mortgage with a Super Bowl ad. But this game has never been only about a cool loan application. It’s truly about a “push button, get loan” experience. We’ve got lots more coming on this in the next couple weeks so stay tuned.

15. Technology is going to make mortgage faster, but that doesn’t mean it will be riskier: Paul Gu, co-founder of online personal lender Upstart, talked a lot about how the company uses a completely different underwriting model than most lenders—it feeds borrower data into an algorithm that Gu claims is more accurate than FICO.

“You can underwrite better using more data than less, and better using a machine learning model than the classical model,” Gu said. “The Upstart model gives you 6 times the accuracy of the FICO model in some instances. For similar FICO scores, our borrower customers default at half the rate.”

Mayopolous of Blend also said technology can make lending safer and easier at the same time.

“Technology is going to de-risk the mortgage business,” he said, referring to how, if you direct-connect your bank accounts and paystubs, lenders know they can trust your data (vs. you submitting paper documents). So you can get approved way faster, and the global financial system remains safe because they’re making decisions with source data.

The overall vibe of this gathering wasn’t exuberance. It was measured, focused on what makes life better for you, and what makes everything safer for the system. This is an important offset to what most media headlines could have you believe.

All of consumer finance and housing is in the early innings of radical tech-fueled change, and the good news is that it’s led by what you want: make your financial life easy and safe while educating you in the process.

We’re not there yet, but the tech infrastructure is being laid now, and has long-term backing by the biggest investors on the planet.

Stay tuned as we follow up on all these threads.
___
Reference: