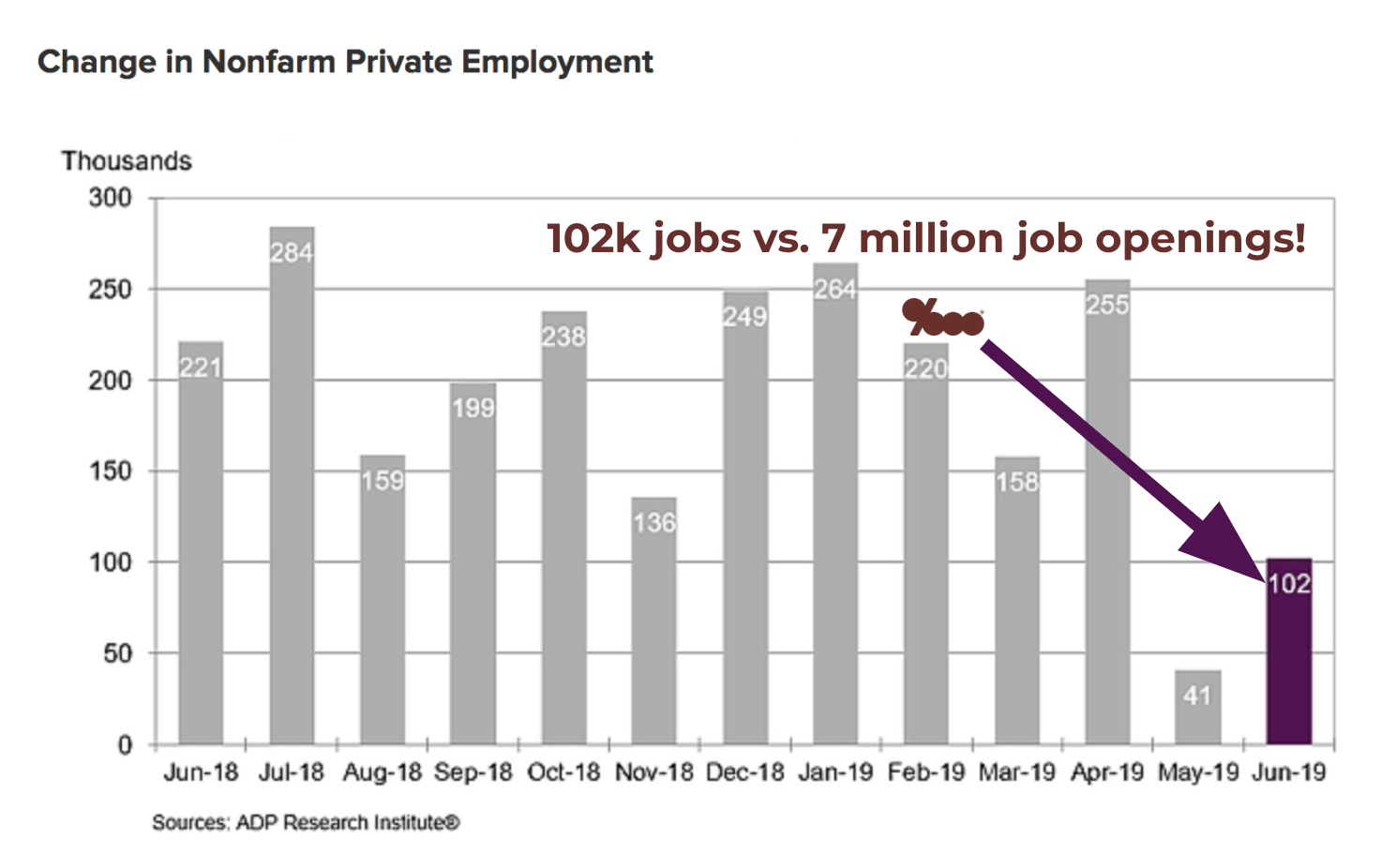 The U.S. labor market is telling us one thing and doing the opposite. That makes it hard to figure out if things are good or bad right now (or both), so let’s dig into the jobs report numbers so you can plan your own financial decisions around the big picture.

On one hand, employers are telling us there’s a massive demand for workers. There are 7.4 million job openings right now, according to government data. The data also shows 5.9 million unemployed workers who could in theory fill those jobs.

Tons of people are also quitting their jobs to get new ones, so that means it’s a good time to be an experienced worker with in-demand skills.

YOU’RE NOT A GOOD FIT FOR THIS POSITION

On the other hand, the economy isn’t adding jobs like you’d think it would with 7 million openings. The U.S. is adding new jobs, but at a glacial place. Check out this chart from the ADP employment report out today.

7 million job openings, but the U.S. can only add 102k jobs? The number of jobs added in the past two months combined barely beat the weakest jobs month in the past year (November 2018).

A GLIMMER OF HOPE IN THE LABOR MARKET?

Friday’s Bureau of Labor Statistics jobs report for June had decent news for economy nerds like me. According to the BLS, the U.S. added 224k jobs in June.

Quick sidebar: I know I just said the U.S. added 102k jobs above. What gives?!

ADP is a big HR tech company that serves many U.S. employers, and they use client data to estimate jobs added every month. The U.S. government makes its own predictions by surveying 142k businesses about their employment data.

ADP surveys 400k pairs of businesses in different sectors, representing about 20% of all the employed workers in the U.S.

So both reports are “right,” it’s just a matter of sample sizes.

Back to the BLS. Even though the U.S. apparently added a lot of jobs in June, we’ve only added 172k jobs per month this year compared with 223k in 2018.

Why has jobs growth shrunk if we have 7 million job openings?

WHAT ELSE IS UP?

Other data points give us a fuller picture of the job market.

Wage growth is pitiful right now. Average wages rose 6 cents in June and 9 cents in May, according to the BLS.

You’d figure employers would be desperately competing for talent with 7 million openings and 6 million job seekers.

However, that market dynamic hasn’t resulted in higher earnings for workers. Average wages have only increased 1.3% since May 2018. For context, inflation in the Consumer Price Index, a government measure of how much everyday goods cost, went up 1.9%.

Here’s a chart from the Bureau of Labor Statistics that shows the lazy growth in wages: 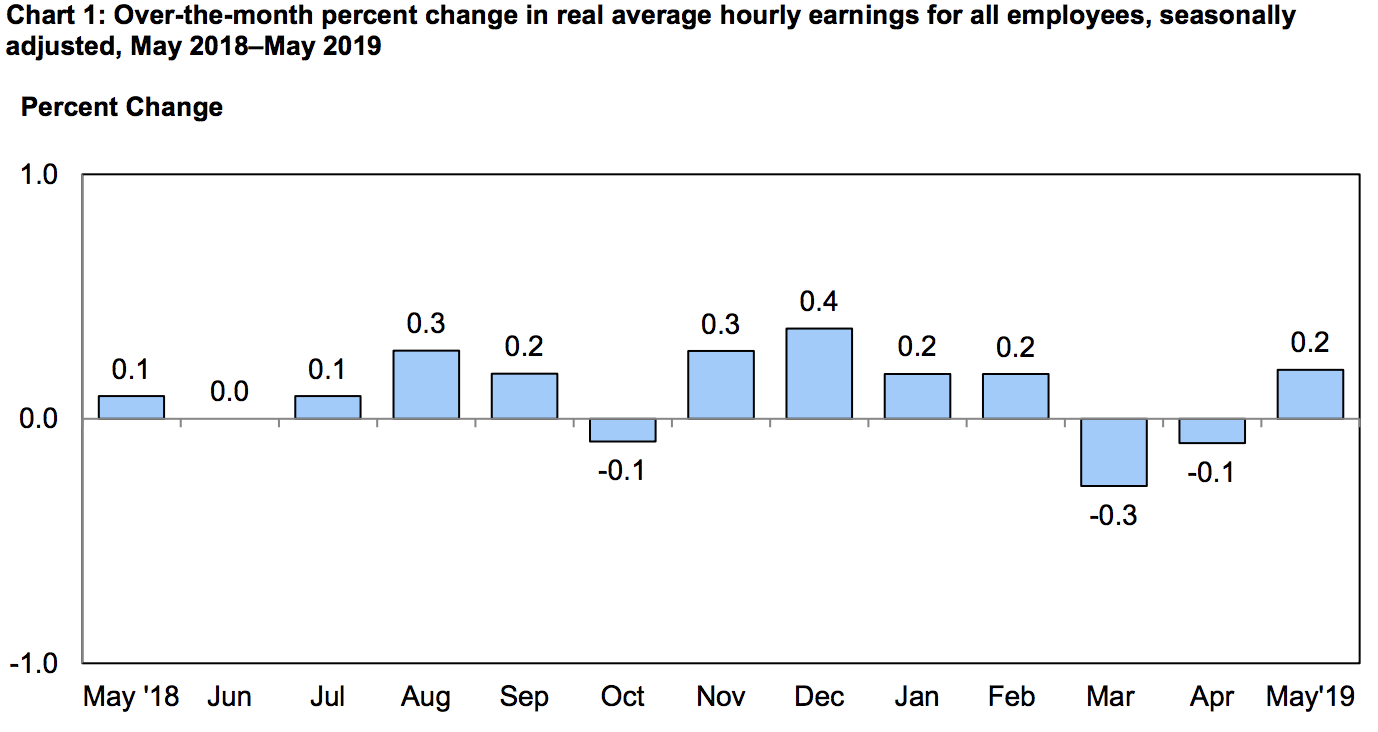 And here’s wage growth against inflation:

WHAT GIVES WITH THE LABOR MARKET?

So why is the labor market not, uh, doing its job?

One of the theories is that employers need workers with skills that unemployed people don’t have. If companies need AI engineers and software developers and if the people looking for work aren’t tech wizards, they can’t fill those jobs.

Many industries and the skills that they needed are getting disrupted out of existence. Companies used to have teams of full-time people on projects that now get outsourced to gig economy workers.

We don’t know where this goes from here. But what we do know is how you can use this knowledge for your own plans.

If you’re a worker in a growing industry with solid skills, you can be pretty sure of your financial position and plan accordingly as you make real estate and financial decisions. Your employer needs you desperately right now (even if they don’t always show it).

For everyone else, there can still be good news in an uncertain job market. Bad economic data can keep mortgage rates low.

So even if your paycheck isn’t growing like you want it to, bad news can keep your new home more affordable.

If your coworkers aren’t as excited about this stuff as you are, well, there are 7 million job openings…

– The U.S. Labor Market Isn’t all That Healthy (Bloomberg)

– Should your boss help you with your finances, or just pay you more?