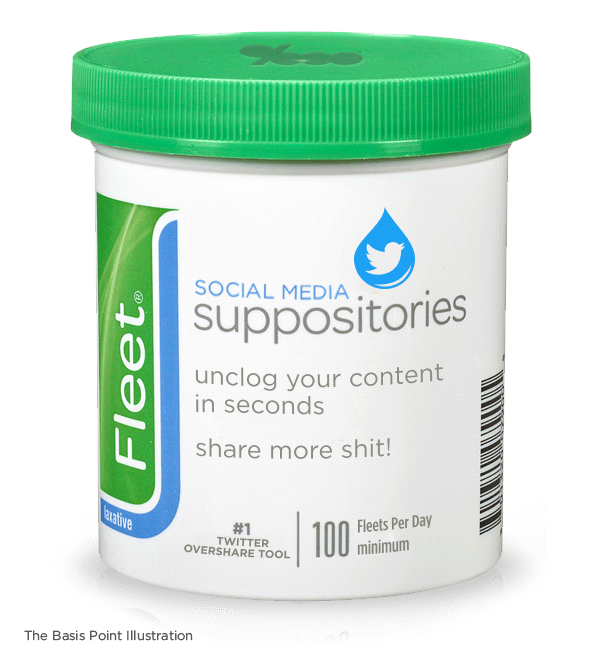 Twitter, following all top social platforms before it, launched stories this week. A Twitter story is called a fleet, and within seconds of my first fleet I learned there’s a constipation product called Fleet. So I humbly offer this Fleet suppository rebranding to mark this “share more shit” milestone in our oversharing era.

But in all seriousness, I actually love Twitter’s fleet story branding for three reasons.

Second, it’s one syllable which is always a branding plus.

Third, fleet implies what it is — a disappearing thought. A good brand describes what it does and/or has dimensionality. Fleet does both.

These add up to a Twitter brand that’s deeper than it seems, and fleet will stick.

Plus it’ll help unstick content deep in our creative annals.

See how fun those constipation jokes are?

As such, I’ll keep making this brand of fleet jokes while also being a fleet brand fan.

iPad is a key tech example where everyone ripped it out of the gate, and now it’s bedrock household tech.

Likewise in financial services, many said Rocket Mortgage was too cute when it launched as a product in 2015. Now it’s a household name. They spent $1 billion on branding last year, and renamed the company from Quicken Loans to Rocket Companies this year as I predicted.

And banking giant Truist with 10 million customers — formed last year through a Suntrust and BB&T merger — was ripped early too. That brand also stuck given their scale and resources. And because it’s a good brand as I explained when it launched.

So I offer my respect to Twitter’s product and brand teams on the fleet launch.

I don’t know if fleets are for me because I think Twitter’s format innately supports ephemeral, faster moving topics.

But high engagement on Twitter can be fleeting, and maybe I’ll get sucked into more DM engagement that fleets are intended to drive.

More on this in the links below. And here are some other fun fleet tweets, mainly from ProfJeffJarviss who always comes caustic on marketing.

Just canvassed every guy at my local gym (David Barton in Chelsea) on how excited they are for Fleet Week. Very positive response.

Instead of $20k/day in legacy currency, Trump should pay Giuliani in Fleet exposure.

Moment of silence for every editor being pulled into an emergency meeting with executives to brainstorm “big Fleet ideas” for the brand.

Let me know your thoughts below, or fleet/tweet at me @thebasispoint.

– What Twitter Fleets Signals About The Future Of The Company