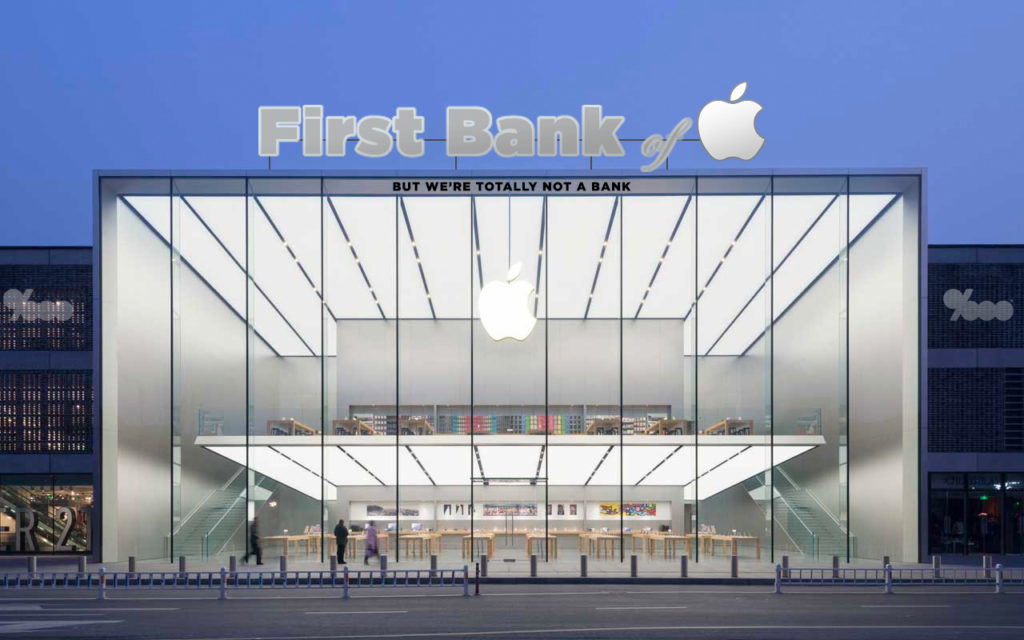 You might not have noticed, but every company is a bank now. They’ll be the first to tell you that they’re not, though.

Apple’s new credit card, which is issued by one of the world’s largest banks? Not a bank!

SoFi, a company that will help you invest, make a mortgage for you, and run your checking and savings account? Also totally not a bank.

Robinhood, Acorns, Affirm, Stash, and all the other hot tech companies that are offering you more and more financial products? Not banks at all!

Even Amazon totally isn’t a bank—even though it’s competing to be the top financial services provider in India, and is active in almost every area of finance.

Do these companies have the regulatory paperwork or cash on hand to meet the U.S. government’s definitions of a formal bank?

Not all of them, but that doesn’t really matter to you as far as the marketing taglines are concerned.

These companies are banks in the sense that they want you to trust them enough to center your financial life around them.

Not-A-Bank-ism is just a way to tiptoe around peoples’ distrust of Wall Street—even though the Not-A-Banks are offering the same products.

So if a company is telling you they’re not a bank, that’s a sign they totally are and they want to play that role in your life. They want a slice of your financial life and they have a ton of Silicon Valley investment money to spend in order to get it.

You should treat the Not-A-Banks the same way you would a bank.

Do the math and make sure the products these companies offer work for your financial balance. Apple’s card is going to be super easy to sign up for (you literally sign up in an app and get instant access to credit via Apple Pay), so it’ll be really tempting. But just because you didn’t sign up in a bank branch doesn’t mean Apple’s card isn’t a credit card like you’d get at a dusty old bank.

Apple’s credit card might be convenient if your life runs on iOS, but it might not be the best deal (although that silver card looks so cool it’s hard to resist).

The key thing to watch will be whether these hip companies become Big Banks, remain Cool New Banks, or get obliterated by the Bank of Amazon or First Bank of Apple. We’ve had an incredible economic run the past 10 years that’s bound to slow down soon, and the Not-A-Banks will have their first taste of hard times when the inevitable recession hits.

It’s easy these days for SoFi to be slick and offer avocado toast alongside a mortgage as a cheeky marketing tactic, but we haven’t seen the company go through an economic recession—will it still be hip and cool when it’s foreclosing on your home?

I’ll leave that question open. For now, keep a cool head when flashy tech companies start pitching you finance. We’ll be watching to see whether hip not-banks turn into your dad’s bank under pressure or figure out how to stay cool.