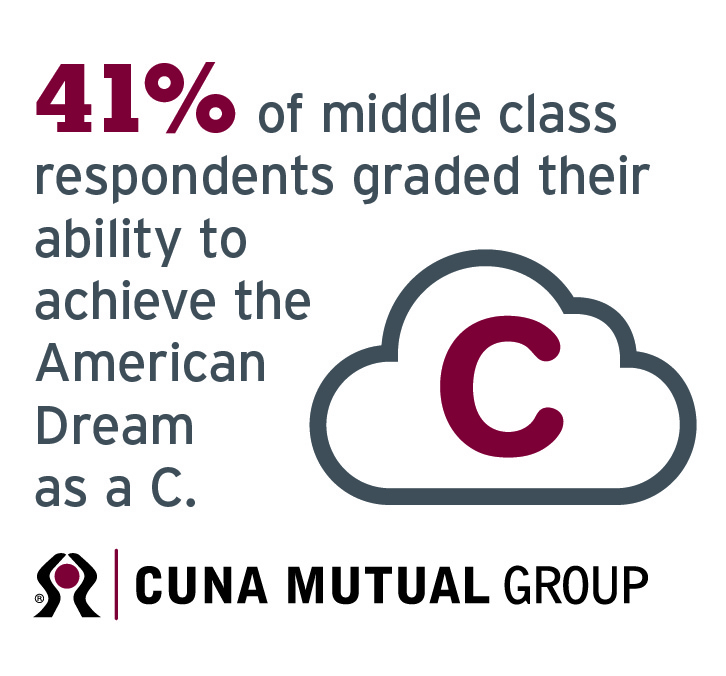 Even though a lot of the numbers say the American Dream is still alive, a lot of middle class people on Main Street aren’t convinced.

New research from CUNA Mutual, a tech firm that powers credit unions, surveyed 1,300 people who make between $35k and $100k a year to see how people on the ground feel about the economy.

Here’s a quick summary of how the middle class feels about the American Dream:

LOTS OF MIDDLE CLASS WORRIES, BUT SOME HOPE

– 50% of middle class people surveyed said the U.S. will enter a recession next year

– But people feel stable in their careers—88% of people think their job is secure.

– 53% of people said they’d cut spending in a recession

– Only 54% of women said they’re somewhat or very confident about their money situation, versus 68% of men

SHOULD I BE WORRIED?

Not necessarily. As we’ve noted before, the next recession likely won’t be a brutal culling of the economy like it was in 2008. There’s not systemic risk in the same way we saw with real estate in the run up to 2008, even though there are some smaller red flags in auto loans.

But here’s the real story: in good time and bad, real life doesn’t stop. If you have your heart set on your American Dream home, your local market and job prospects will show you the way, not the national economy.

The numbers above clue us into that. Even though people are worried about a recession, 88% of them think their job is secure. That shows you the way people think on Main Street is way different than when we think about the big picture.

Around 6 million home sales happen every year no matter what. So focus on your neighborhood and the offer you want to make—not what next year’s GDP numbers look like.