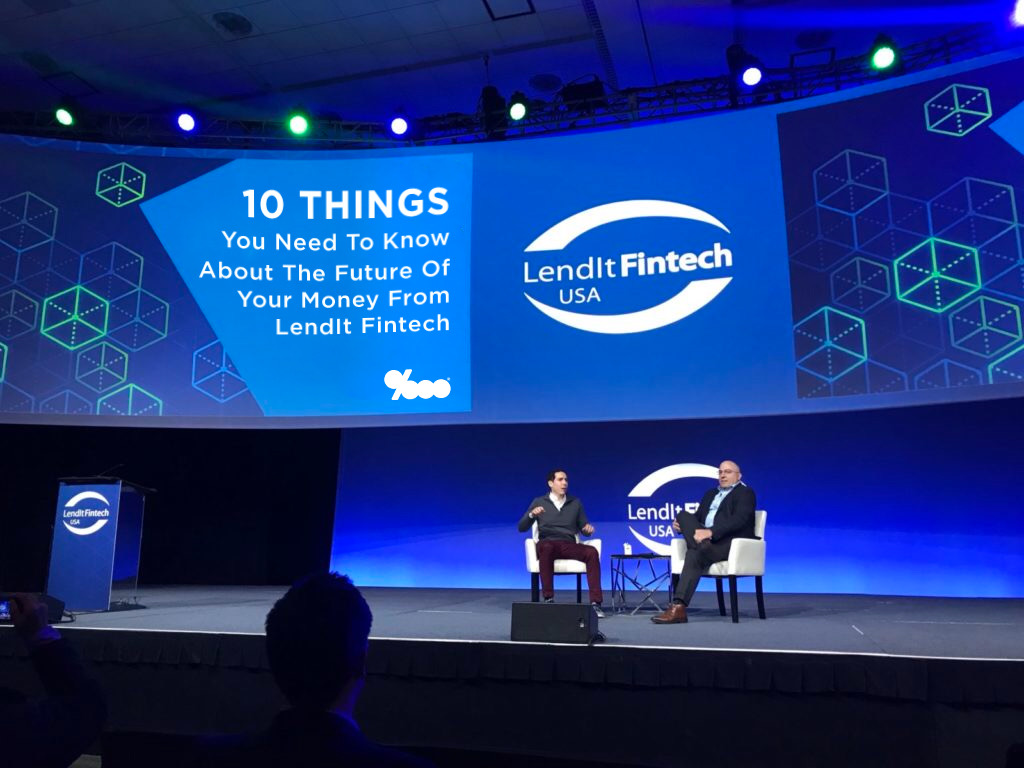 The Basis Point team spent last week on the ground at LendIt Fintech, a huge conference of all the top players in consumer finance and technology. This conference is where all the head honchos of finance speak to each other, and a lot of important news was thrown about. It’s our job to translate the industry-speak into the key lessons for you, so here are the top 10 things you need to know about how finance is going to change for you from LendIt.

1. The lending industry wants to lend to more people, so they’re figuring out how to give more people credit scores: Both days of the conference started with speakers focused on “innovations in credit scoring,” a phrase guaranteed to make you raise your eyebrows. Basically, lenders want to make more money lending to more people, so they’re looking for ways to give credit scores to people who don’t gave the financial history to justify a score. Hmm, didn’t we have a financial crisis because banks lent money to people who didn’t have the credit to back it up? Forget about that, we can just innovate around it!

Kidding aside, a new approach to the dusty old credit score could be huge for a lot of people who are shut out of financial services. Immigrants and the poor often don’t have a credit history to get loans they need, even if they have the income to pay them back. Companies like ZestFinance, Discover, Elevate, Mastercard, and FICO are all trying to give more people access to credit. For example, Mastercard partnered with the company Elevate to give credit cards to people in the gig economy. FICO has a new credit scoring product called UltraFICO that looks at bank statements instead of credit history. It’s cool that these companies are expanding access to credit, but savvy readers should know that this means these companies are willing to invest in these new credit products because they need more customers. We’ll be keeping an eye on what this means for safety of the financial system as a whole as these companies approve more people for loans.

2. No company thinks Amazon and Apple banks will crush them: If you ask us, it’s only a matter of time until Apple and Amazon become banks, and they’re already halfway there. However, finance hotshots seem to think their sh*t don’t stink when compared to the tech giants. Pretty much every speaker was asked how they would compete with Apple or Amazon on their home turf, and nobody thought Big Tech would put them out of business.

For example, the CEO of Discover said Amazon doesn’t have the experience dealing with regulators that Discover has, so he’s safe from Jeff Bezos for now. Did he forget Amazon is opening a new HQ across the river from Washington, D.C.? They have 28 in-house lobbyists in DC alone, employ 13 outside lobbying firms, spent a record $14 million on lobbying in 2018 and have ramped up banking and financial lobbying sharply in the past few years, per this data from Bloomberg: 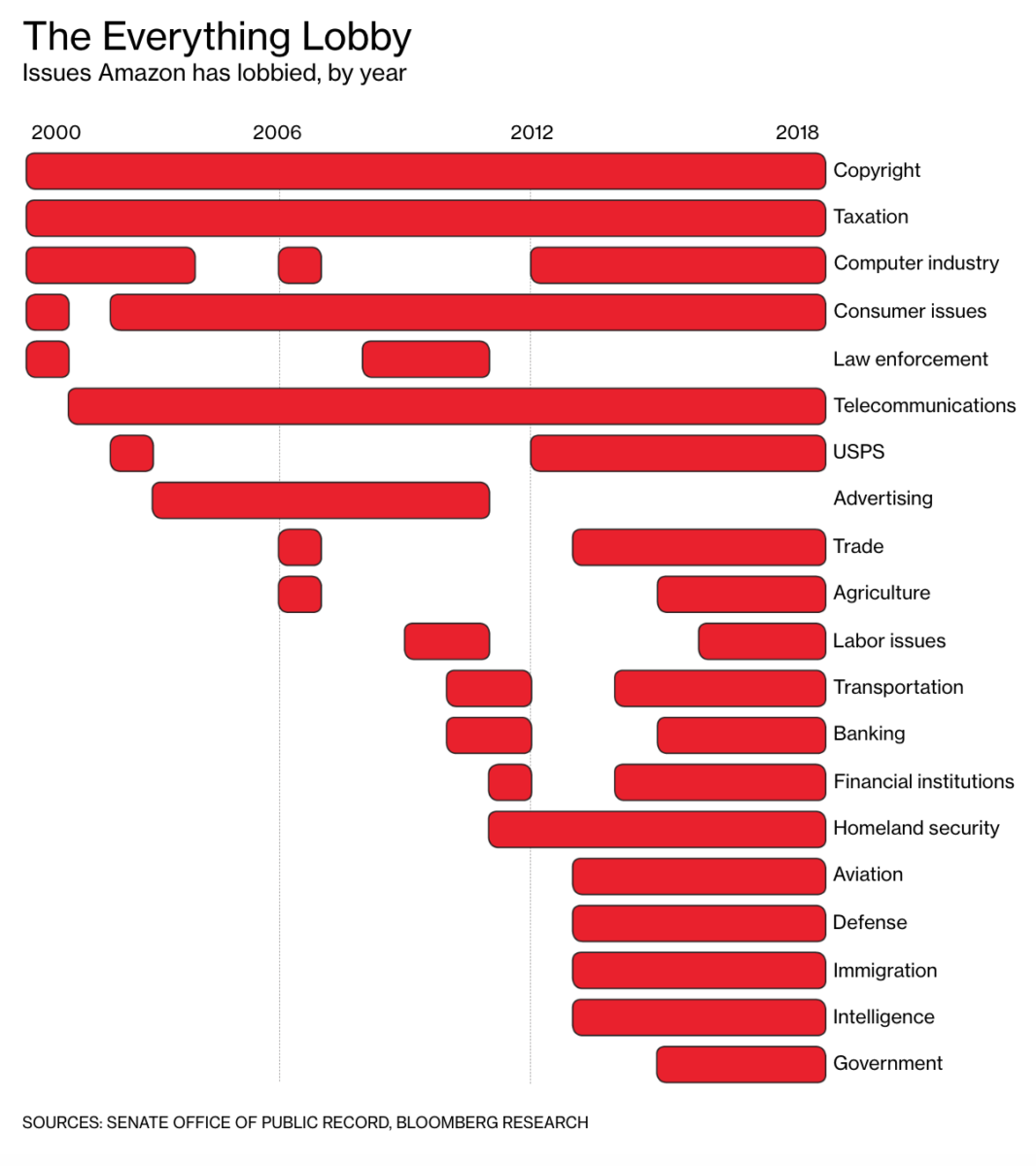 Next, fintech wunderkind and PayPal cofounder Max Levchin said Amazon competing with him would be good for his business. He runs a company called Affirm that gives people small loans to pay for goods while online shopping. He says if Amazon started doing the same thing, it would normalize the product, which is a win for him. I think he makes a good point, and he’s safe because Affirm just inked a deal to provide those loans to Walmart customers (Amazon’s biggest competitor).

“If Apple wanted to get into small business lending, well, we modeled our experience on the Apple design philosophy, so we’d be happy to partner with them to do that,” she said.

Make no mistake, though—the Amazon and Apple consumer finance plays will eat some lunches, and all of these execs need to have a plan in case it’s theirs.

3. Everyone is worried about the next recession, but no one knows where it will come from: It’s been 11 years since the start of the last recession, and finance people are starting to get nervous. No one knows where the next recession will come from, but one thing everyone at LendIt agreed on was that the next recession won’t look like the last one. New regulations on offering mortgages have (until this week) prevented the Wild West-style lending that led to the 2008 crisis, and people in the U.S. overall aren’t spending more than they make. This is another thread we’re going to keep an eye on—because no-paystub-needed mortgages returned this week—so stay tuned to The Basis Point for explainers on how to read the economy and whether loan quality starts deteriorating and poisoning the system like in the last cycle.

4. People realize “don’t buy that latte” isn’t good financial advice: My favorite pastime is dunking on worthless “don’t buy coffee if you’re saving for retirement” articles that seem to float around the internet every day, and smart people in finance are waking up to the fact that people don’t buy that as advice. Sallie Krawcheck, CEO of Ellevest, is trying to make financial advice actually work for people traditionally left out in the cold from financial services like women. She said “Financial advice isn’t ‘don’t buy a latte.’ It’s about the cost of taking a career break, and how investing can make up for that.”

That really resonated with me—if I was getting financial advice that told me how I could take significant time off to be with my family instead of just telling me to scrimp and save, I’d start putting a lot more effort in my financial life. Bank execs reading this—take note.

5. The gig economy is here and your bank is dealing with it: No matter how much we hate it, the hustle n’ grind economy is alive and well. Millions of people have had to adjust to a life of endless crunch and no benefits, and now financial services is getting used to it too. That’s why lenders and credit scorers are reinventing the wheel—it’s hard to get an accurate credit score for someone who has multiple employers and freelance checks instead of pay stubs.

The ways banks (and Not-A-Banks) are dealing the gig economy can start to lean into dystopian sci-fi, though. Dave.com, a startup that helps people manage their money, has a “gigs” tab on its app that will show you how to sign up to drive for Uber if you’re having trouble paying your bills. Thank God It’s Monday, right?

6. Startups want to be your financial best friend and mentor: Rich people have teams of who just manage their money, which is why they’re so good at holding onto it. Now, startups making finance apps want to give you a taste of that life with AI assistants who will help you manage your money. Companies like Dave.com, Tally, and MoneyLion will all help you make decisions about how to reach your financial goals. This kind of advice is huge, since people with money tend to pass down their advice (and money) down to their kids, so financial knowledge stays within families. If your family has never had that kind of wealth, you might have that knowledge base to draw on that the better off do. These digital assistants can help level the playing field in that way.

7. Finance companies want you to trust them with your data: Facebook is getting absolutely rolled in by the media and U.S. government for its cavalier attitude towards your personal data, and that scares the crap out of the heavily-regulated finance industry. However, to serve you better, finance companies need your data, so they’re going all-in on making sure you know what they’re doing with your data and that they have your permission to use it. Here’s what Kate Adamson, head of mortgage at Plaid, the company that handles data for a big chunk of the finance industry, has to say about that:

“Our product fails if you don’t link your account because you don’t trust us.”

Banks, lenders and apps want your data because having more info on you can help them offer better offers and waste less of your time.

“The difference between giving your data to Tally or Dave and giving it to Facebook is that we’re using it to help you and not to sell ads to you,” Tally CEO Jason Brown said. “We don’t make money through ads, we make money from saving people money on credit card interest.”

On your end, you’ll have more fine print to read, but you’ll at least know where your data is going and who has access to it.

8. Student lenders and servicers think you should be pissed at schools, not them: You hate paying your student loan servicer, and so do I—it bites knowing someone is profiting off your misery. The servicers, however, say hate the player, not the game. They say we student loan borrowers should direct our anger at the schools who raise tuition every year and not them. That’s why some lenders are starting to take schools to task for not preparing graduates for the job market, leading them to default on their loans. That’s convenient for the lenders and servicers, because they still keep giving out the loans, which encourages the schools to keep raising tuition. Everyone’s at fault here!

9. The real estate industry wants to make home buying and selling way easier for you, even if some players lose along the way: We’ve been saying over and over again that buying, selling, and financing a home is going to be much easier in the future, and the real estate industry is committed to making that a reality. Companies like Knock, Opendoor, and Offerpad will buy your home without you having to deal with the hassle of an agent, and Zillow will do the same and give you your new mortgage too.

These companies all have a ton of money, and we still don’t know if one will be king or if there’s room for multiple homebuying services. Whatever it ends up being, you win, since a lot of homebuying headaches will be history.

10. Finance is changing faster than we can wrap our heads around: If you took someone from 2008 and plopped them in the middle of LendIt, they’d have absolutely no idea what’s going on. The gig economy, smartphones and billions of dollars in tech investment has changed the way we work, live, and relate to people. The biggest changes are yet to come. Will everyone have their own personalized AI assistant helping them make choices, like some of these finance apps are betting? Will lenders’ search for more customers lead to the next financial crisis? Will the gig economy crash?

We’re keeping track, so stay tuned to The Basis Point as we explore all of these themes.