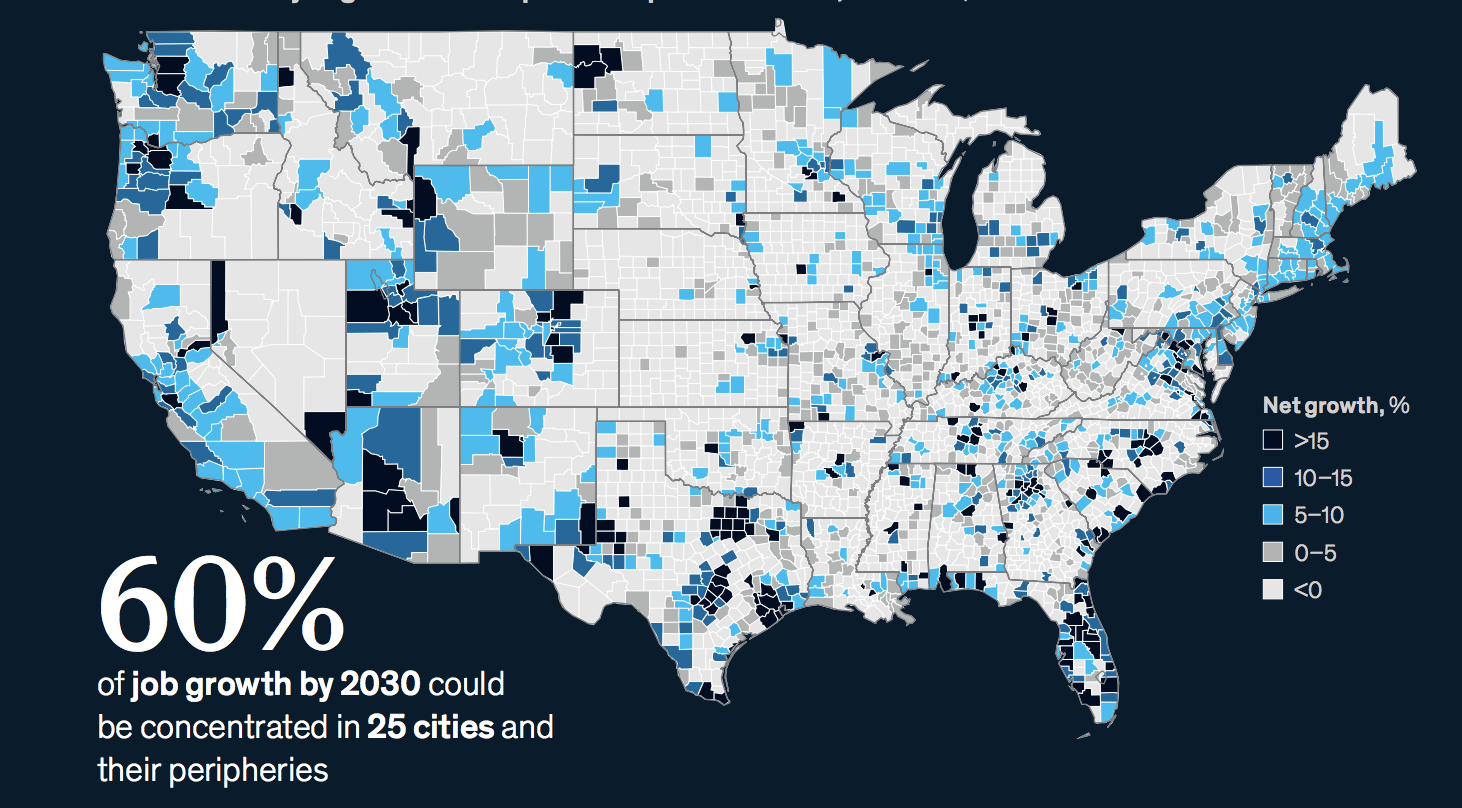 This ain’t your grandpa’s workforce any more. Clock-in/clock-out is dead and gone, automation is in, and you have to be on 25/8 just to keep up.

That’s why we pay close attention to the state of work—this stuff affects all of us every day. So when consulting giant McKinsey says “this is what the future of work looks like,” we listen.

McKinsey just put out a 124-page report on how automation and the always-on workforce is changing the way we live. Nobody’s got time to read all that, though (except for me), so we pulled out the 10 things you need to know about the future of work.

THERE ISN’T A NATIONAL ECONOMY

According to McKinsey, the U.S. economy is actually just a series of regional economies based around “megacities.” The top 25 cities in the country have contributed 2/3 of the job growth of the post-2008 recession economy, and everywhere else is trailing these elite urban centers.

As cities thrive, rural areas face harsher prospects. Rural areas had 360k fewer jobs in 2017 than in 2007. With aging populations, higher unemployment, and smaller populations, an already-wide gulf between urban and rural could grow even deeper.

ROBOTS ARE COMING FOR OFFICE WORKERS

If you thought robots were just for factories, you might want to update your resume. Customer service and office functions are increasingly being replaced by artificial intelligence and software. McKinsey predicts that nearly 15 million jobs currently held by 18-34 year olds could be automated by 2030.

BUT RURAL WORKERS WILL BE THE FIRST TO GO

NICHE CITIES OWN THE YOUNG AND THE OLD

Smaller, off-beat cities like Bend, Oregon and Provo, Utah are hot for retirees, but also have huge inflows of young people due to their top-tier research colleges. Small niche cities like these have the second-highest rate of net migration, according to McKinsey.

THE MIDDLE CLASS IS EVAPORATING 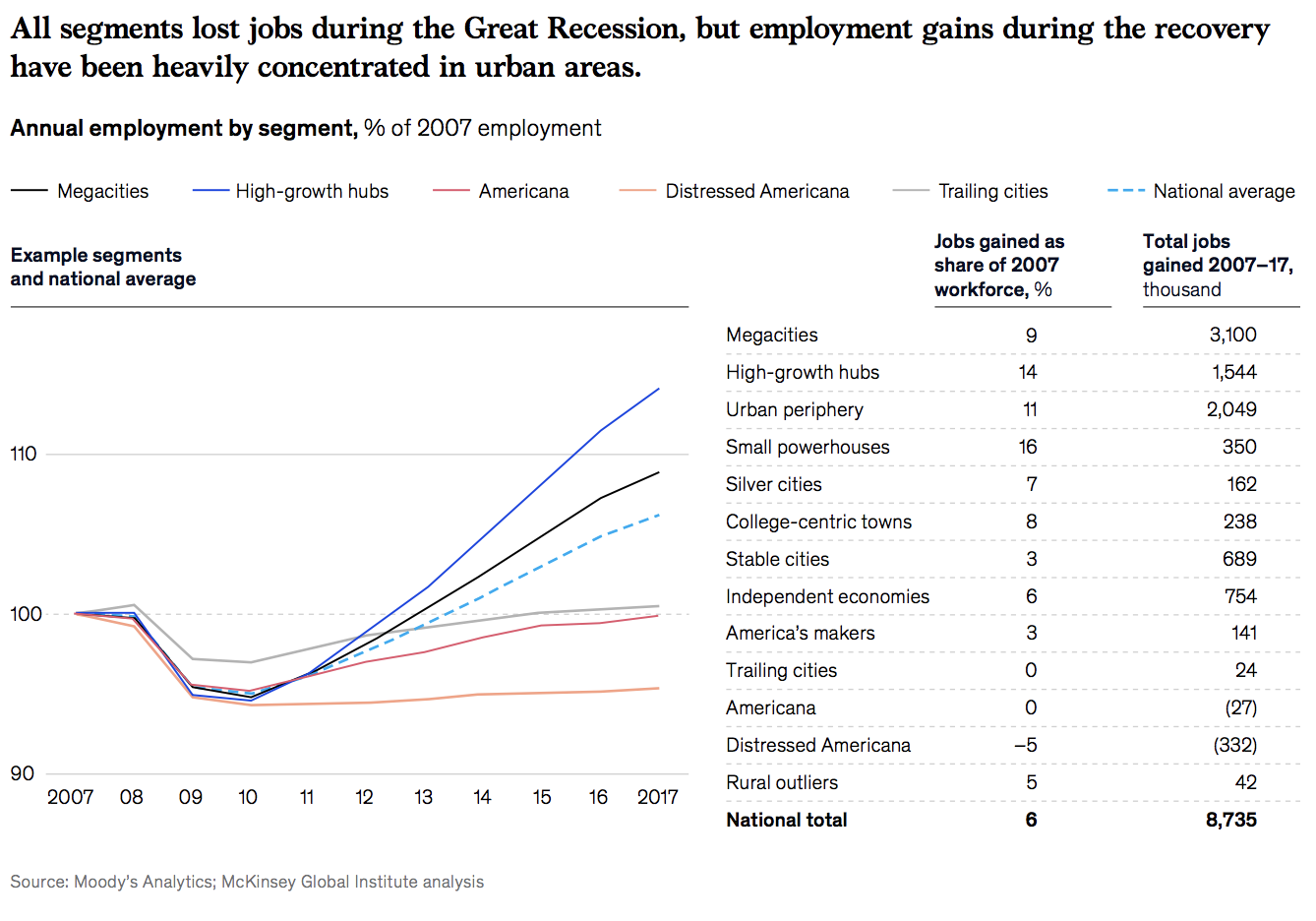 MOVING IS A THING OF THE PAST

Moving somewhere else for a better job and a better life is part of the American Dream for many. Unfortunately, it’s a lot less common than it once was. In 1990, 6.1% of Americans moved—in 2017, only 3.6% did. People who moved from rural areas or lower-tier cities typically moved to similar areas in other parts of the country, rather than to the megacities.

EVEN IF A ROBOT DOESN’T TAKE YOUR JOB, IT WILL HELP YOU DO IT

McKinsey says “within 60 percent of jobs, at least 30 percent of activities could be automated by adapting currently demonstrated technologies.” This is a good thing for most of us—soon, machines will take over a lot of busywork, helping you serve clients better.

Being replaced by a machine isn’t as stark as being handed a pink slip as a robot shows up at your desk. Rather, as more technology helps smaller teams become more efficient, we’ll see less hiring for automated roles as they become less important.

WE HAVE NO IDEA WHAT THE FUTURE ECONOMY LOOKS LIKE

There’s still a lot of hope out there for the young and enterprising. McKinsey expects that 9% of the jobs that exist in 2030 will be in occupations we can’t even imagine right now. Imagine explaining to someone in 2009 that there would be people whose full-time jobs would be designing and posting ads on Instagram in 2019. Instagram didn’t even exist in 2009!

So while a lot of these facts paint a scary picture of the future of work, there’s a lot to be hopeful for. We’ll be chewing over this data in more detail this week.

For now, check out our archives on the state of work below.

___
The Basis Point on the state of work

– 3 Ways To ‘Crush It’ Without Being An Asshole

– Watch me smash this 4am smoothie. Then watch me crush my 25 hour day.

– The State of Work 20 Years After Office Space